Bombs away: longshots lead to huge triple at Laurel Park 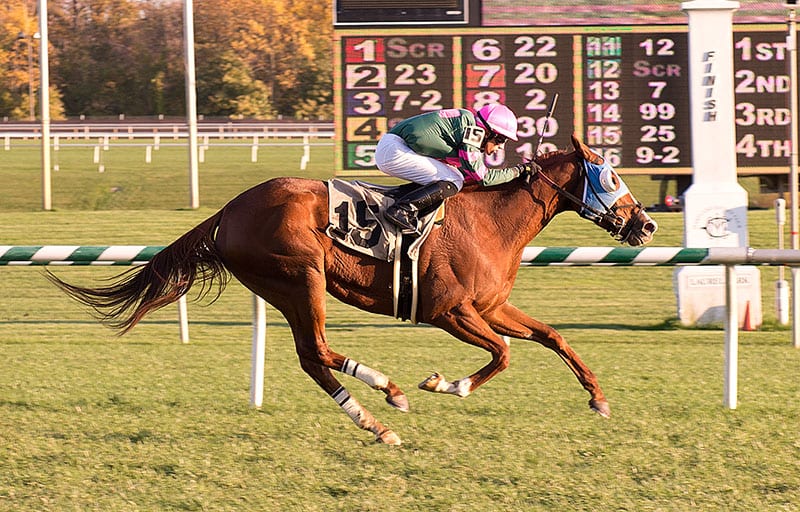 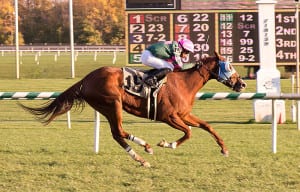 It was a mad scramble at the top of the lane with eight of the 13 fillies and mares in the field poised to win, but Mrs. Arturo Peralta Ramos’s Vicky Ticky Tavie was the one who separated herself from the rest and galloped to victory in today’s 10th race at Laurel Park, the $45,000 optional allowance feature.

The Hamilton Smith trainee was winning on the grass at Laurel for the second time in a row, once again carrying Jevian Toledo to victory, this time in 1:49.24 for the mile and one sixteenth distance over the good turf. War Relic nipped 113-1 longshot Mayourneen to take second.

“On paper this was a tough race,” Smith said. “This filly has been training better than ever the last month. She ran two huge races this month, especially this one where she beat some really good fillies.”

It was the second win of the afternoon for Smith, who earlier on the 11-race card scored with Don’t Be Fooled ($11.60-race 6). The 69-year-old is tied with Jamie Ness for second place in the fall standings with 14 victories. Seven of the wins have been on the turf with an average mutual of $22.46.

“It is a great way to start the meet,” added Smith, who trails Mike Trombetta by one victory. “I am going to ride this while I can because there are so many ups and downs in this business.”

Two races earlier, El Seventyseven won for the first time in 54 weeks beating a group of allowance runners in the $47,000 co-feature. The 6-year-old was a driving winner of the 5 ½ furlong test on the turf course. The son of Stormy Atlantic and jockey Abel Castellano stopped the clock in 1:04.65. A P Elvis beat Night Officer and Bye Bye Bernie in a three-way photo for second.

“He broke well and we found ourselves in the lead,” Castellano said. “I let him go and he was galloping nicely on the lead. When I asked him at the top of the stretch, he took off. When we hit the sixteenth pole, I knew we had it.”

El Seventyseven paid $13. He had not visited the winners’ circle since October 6, 2013 when Castellano guided the gelding to victory at Parx Racing.