Maryland Million a party, and, for horsemen, a goal 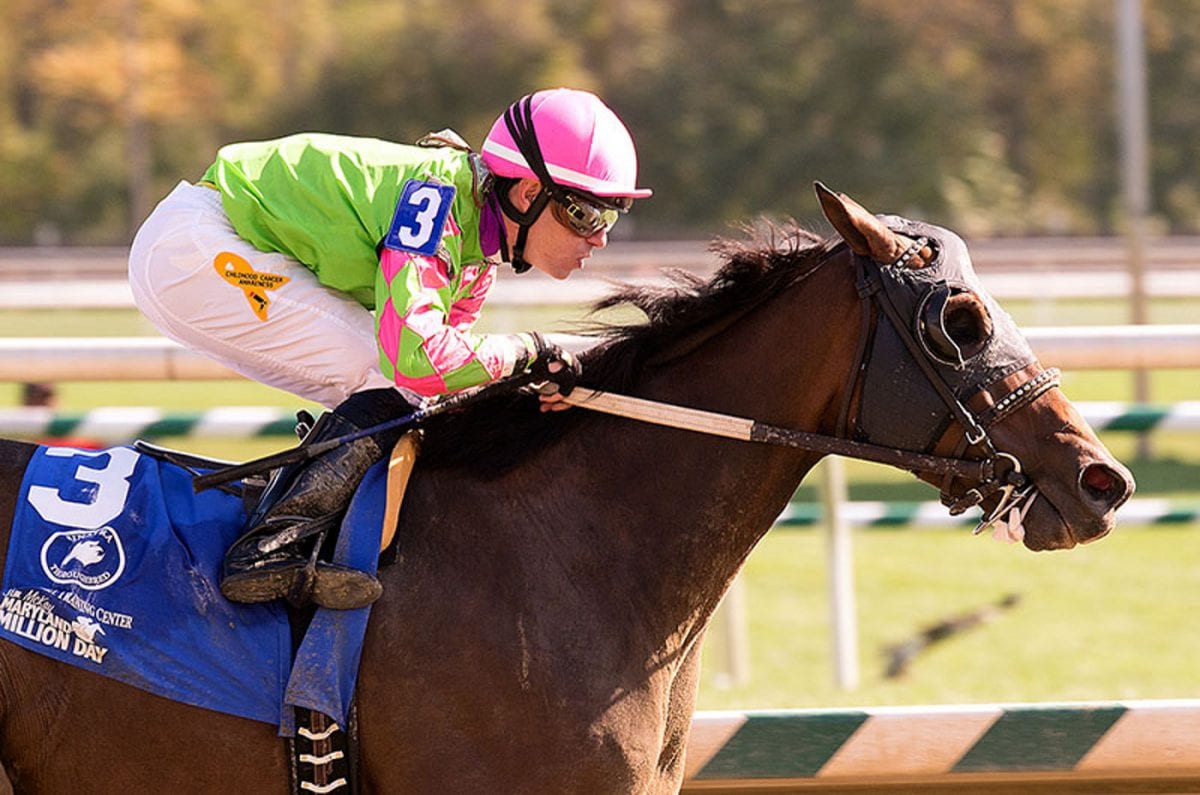 Horacio Karamanos and Bear Access head to a place few expected them to find — the winner’s circle. Photo by The Racing Biz.

Yet for all that — and though the rest of the racing world points to the De Francis as the fulcrum of Maryland’s fall racing season — make no mistake: Maryland Million matters to Maryland horsemen, and not just for the party.

“This was kind of our target for the season,” said trainer Mike Trombetta after D C Dancer, a four-year-old son of Not for Love he trains for TomRus LLC, won the Sprint.  “It’s cool because it’s home, and, Lord willing, it worked out really good.”

Trombetta won two of the day’s major races, also taking the Lassie for two-year-old fillies when My Magician, a 28-1 outsider, held on to win by a neck under Julian Pimentel.  It was the first stakes victory for new sire Street Magician.

In the Sprint, D C Dancer, never far back, made a sharp move while three wide to the lead and had plenty in the tank to post a length-and-a-quarter win under Angel Serpa.

It was his first stakes win and his fourth victory overall — all at Laurel Park.  “He seems to have an affinity for this track,” Trombetta understated.

He’s not the only one.

Jockey Trevor McCarthy is running away with Laurel’s fall meet, having won 32 races –13 more than second-place pilot J.D. Acosta — with earnings of over $1 million, also far more than any other rider.  On Saturday, McCarthy had nine mounts in the 11 races, among them four favorites.

He won one race and came within a whisker of having a huge day, missing victories in the Maryland Million Starter Handicap by a head and in the Lassie by two necks.

But he wasn’t complaining after the day’s second race, the Distaff, when he and favored Classy Coco made short work of the eight-horse field, rolling to a six-length score that gave him his first Maryland Million victory.

“It’s a little relieving,” he said of getting a win early in the day, “but rewarding at the same time.  I’m pretty excited about today — I think it’s going to be a great day.”

McCarthy’s grandmother, Carolyn Alexander, was down for the day.  He said that she follows his efforts very closely and had made a practice of betting on his horses.

“She told me a couple weeks ago she’s going to stop  betting me because I get too short of prices,” he said with a laugh.

“I told [jockey Horacio] Karamanos in the paddock, ‘We’re going to be 50-1,'” said Larry Murray, trainer of Bear Access. “I said, ‘They might put you on the front end and forget about you. Nobody might go with you,’ and that’s exactly what happened.”

The first time past the wire, with Bear Access already having established a clear advantage, one railbird yelled, “I win — I’ve got the 10 (horse, Bear Access)!”

Perhaps he was a bit ahead of himself, but then again, perhaps not.  Karamanos put the field to sleep on the front end, strolling through a half-mile in 50 seconds flat and three-quarters in 1:15 1/5.  When the real running started, Bear Access had enough in the tank to hold favored Devilish Love at bay.  Defending champ Monster Sleeping was fifth.

“I always wanted to run her in the Maryland Million because we don’t get very many Maryland Million horses,” Murray, who trains for Howard Bender, said.  “Most of ours are by Kentucky stallions.”

Classy Coco was all by her lonesome as she approached the wire. Photo by The Racing Biz.

Not this four-year-old filly, though, who’s by the late Gators N Bears.

“We gave her the winter off and pointed to this race,” Murray said.  Bear Access paid $134.20 to win, the longest price in Maryland Million history.

With a crowd of 18,870 on hand, it was Trombetta who, albeit unknowingly, spoke for most of the day’s connections.