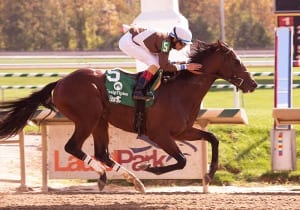 Hillwood Stable LLC’s Golden Years took the lead down the backstretch, then fended off his nearest rival to win the $100,000 Maryland Million Nursery for 2-year-olds, the opening event on Jim McKay Maryland Million Day at Laurel Park.

Sent to post as the heavy favorite under Victor Carrasco for trainer Rodney Jenkins, Golden Years covered the 6-furlong distance in 1:10.54 over the fast main track. The son of Not For Love won by a length and a half, with Legal Punch taking second. Stonebriar finished third.

“A win like this lifts the heads in the barn,” said Jenkins. “We’ve run second here in four stakes in this meet. We knew this was a good horse. He knew a little more about racing this time. He’s never worked too much by himself, so when he’s working in company he’s very aggressive. When he gets in front he kind of waits but then when they get close he runs hard.”

The winner remains unbeaten after two starts having left the maiden ranks at Laurel on September 10.

“Last time he got squished a little bit at the start and got behind horses,” Carrasco said. “Today he broke really, really, really well, even closer than I was expecting. I went to the left hand at the top of the stretch and he responded well.”

The win was the first Maryland Million score for Carrasco, the 2013 Eclipse Award winner for outstanding apprentice, and the second for Jenkins.

The victory was the 29th for the progeny of Not For Love who is tops among Maryland Million stallions. His sons and daughters will be competing in all nine stakes races this afternoon.