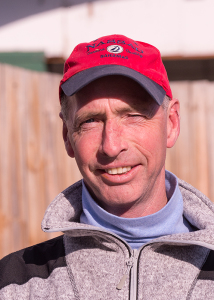 Though he’s no fan of the limelight, Pimlico-based trainer Kieron Magee is gradually becoming a household name in Maryland racing.

Magee, 53, who won his first race in 1999, emerged on the Maryland racing scene in a big way last year when his trainees won 49 races and earned just over $900,000. Magee has already topped that in 2014; he’s posted 64 wins to date and his runners have already exceeded the $1 million mark in seasonal earnings, which he admits was one of the primary goals for the barn this season. Along the way, Magee shared the training title at the Laurel winter meet and won the title at Pimlico, something which brought him great pride and reinvigorated his love for the game.

“Being a Baltimore [County] resident and being stabled at Pimlico, winning the training title at Pimlico really meant a lot to me,” said Magee, who lives in Sparks with his wife Kelly and their daughter, Kierra. “When you see one of your horses win a race, especially one that you recently claimed for one of your owners, it really makes you feel good. It helps remind you why you get up every morning at 3:45 and then get to the track by 4:30.”

Magee said that he and his wife, who is the granddaughter of former trainer Barbara Kees, get attached to the horses in their barn — a difficult thing in the risky claiming business.

“I know it’s a business, but you really can get attached to the horses,” Magee said. “My wife really loves them. Sometimes she gets all choked up and starts crying when we lose one via the claiming box. We like winning races, but we also like the animals and do whatever we can to do right by them when they’re in our barn.”

Saturday was yet another object lesson about the risks of the game.  He began the day with three runners entered but took just one of them back to the barn post-race; two others, Margaret Ownzit and K C Kacey, both were claimed at Penn National.

The one not claimed, a six-year-old Medallist gelding named Sortano owned by Jim Wolf, won for the third time this year, in $16,000 claiming company, and pushed his seasonal earnings to nearly $75,000.

“In many respects, I think Sortano represents the benchmark for our barn,” Magee said. “When I claimed him (in November of 2013), I thought I could change some things with him and win some races with him. I really thought he would do well in the starter handicaps. He won an allowance at Charles Town going seven furlongs and he won a starter on the grass at Pimlico going a mile. It looks like a mile is going to be his best distance.”

Even with the Saturday, October 18 Maryland Million Day fast approaching, Magee has no plans to change his approach to the game. Most of his owners, including Wolf, are interested in playing the claiming game, and Magee has only a trio of maidens in his nearly 40-strong barn. While many Maryland trainers will be eager to garner the spotlight that day, Magee admits he will likely be elsewhere.

“Last year I remember taking the day off,” Magee said. “Unless I have one in or am looking to claim something, I usually don’t go to the track. I know how much Maryland Million Day means to the sport in our state, but I don’t have anything in barn that’s eligible to run in any of those races. I’ll probably take the day off. We’re going to have a very busy meet throughout the fall and winter months at Laurel, so anytime I can take a day off from the races I usually try to take advantage of it.”

That sort of flexibility is essential in the claiming game, a business in which trainers and owners buy horses without the opportunity to “look under the hood.”

“You never know until about a week after you claim one what you can do next with the horse,” Magee explained.  “I study the past performances and look over the condition book, but you really can’t map out a campaign for a lot of these horses.”

That was never truer than last Wednesday afternoon at Laurel.  Magee sent out Two Punch Too to an apparent victory in a claiming race for horses that had never won two races; and he claimed runner-up Burst of Fire out of the race for $7,500 for Wolf. But Two Punch Too was disqualifed and placed third, and Burst of Fire was moved up to the win.  That meant that Magee lost a victory — and his new horse, Burst of Fire, lost the condition and would have to face more accomplished horses in subsequent races.

“That probably could not have played out any worse,” Magee said. “We thought we had a winner and I was glad to claim the second-place horse. When you claim one, you hope they win by 20 or get beat a head. He got beat a head by my horse. But they took down Two Punch Too and put up Burst of Fire, so I lost the win and now I lost the condition with the one I just claimed. It was the worse-case scenario. But I guess those things can happen in this game. That’s why you can’t really plan too far ahead.”