For the second straight year, all of the horses on offer were bred in one of eight states: Maryland, Pennsylvania, New York, Kentucky, West Virginia, Virginia, Florida, and New Jersey.  But the composition of the group changed substantially; whereas a year ago, one-third of the horses sold were bred in Kentucky, New York, and Florida, this year that number fell to about 29 percent.

What’s more, the gross value of the out-of-region horses dropped by about $1.5 million.  In 2013, those horses accounted for fully 42 percent of the event’s total sales; yesterday, they accounted for just 27 percent. 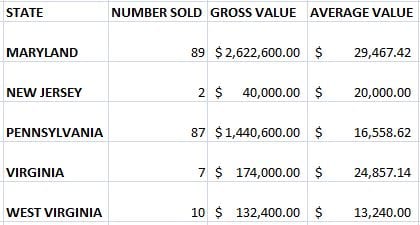 Horses bred in Maryland proved to be the sale’s brightest spot.  More Maryland-breds sold — 89, versus 71  year ago — and they sold for more money.  Maryland-breds averaged $29,467 yesterday, a solid increase from the $23,546 they logged a year ago.

Ellen Charles’s Hillwood Stable LLC bought the sale’s two richest horses and led all buyers with $513,000 in total purchases.  All In Sales bought eight horses — more than any other purchaser — with a combined value of $177,000.

On the sell side, Bill Reightler sold 37 horses, the most of any consignor.