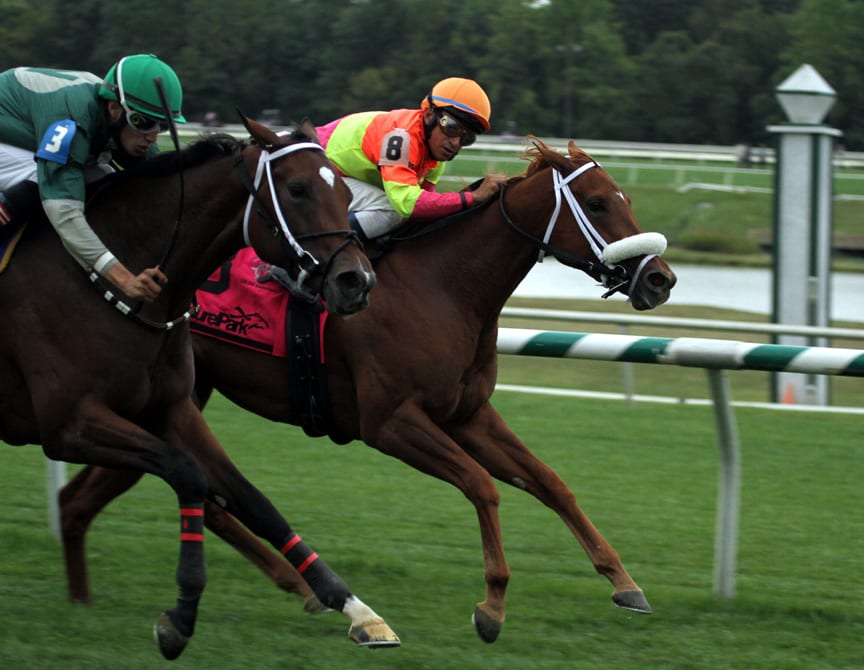 Time hasn’t been kind to the Selima Stakes.

The two-year-old filly race, once a Grade 1 event, lost its grade altogether for the 2000 running; four times since that year, it hasn’t been run at all.

Busher and Bed o’ Roses took the Selima; so did Heavenly Cause and Moms Command.  On the other hand, Its last three winners — Softly Lit (2011), Mystic Love (’12), and Aibhilin (’13) — have a combined total of two post-Selima victories.

Never mind all that, though; Saturday’s 86th running of the grand old race has come up about as stiff as you could hope for in a juvenile event in September.  No fewer than five of the 13 runners are already stakes winners, and six others have won either a maiden special weight race or an allowance event.

Trainer Cal Lynch and owners David and Margaret Wimer won this 5 1/2 furlong turf test last year with Aibhilin, and they’re back again with morning line favorite Harlan’s Honor (5-2).  The daughter of Harlan’s Holiday impressed in her last, the Colleen Stakes at Monmouth Park, when she simply ran the field off their feet in a front-running score.  The show horse that day, Nicky’s Brown Miss, returned to win a $200,000 stake at Kentucky Downs earlier this month.

In many juvenile events, that resume would make Harlan’s Honor’s victory seem a foregone conclusion.  But, while hers may be the best record here, it’s hardly the only impressive one.

Consider, for example, Concealedwithakiss (5-1).  The Eddie Plesa trainee beat maiden claimers by 11 at first asking, and she then returned to take Monmouth’s Sorority Stakes by two (over Coco’s Wildcat, another stakes winner who’s in this field).  This will be the daughter of Political Force’s turf debut; while on the one hand, nothing in her close-up pedigree suggests grass — Grade 1 winner Political Force never tried it, and Concealedwithakiss’ dam, Bold Thunder, by Chief Seattle, was winless in four tries on it — on the other, this filly has been outrunning expectations all along.  Her three siblings to race are a combined one-for-48.

Then there’s 8-1 Coco’s Wildcat.  The Kathleen O’Connell trainee, who will break from the outside post, won at first asking before registering a dominant, front-running score in the Cassidy at Gulfstream.  She chased Concealedwithakiss — in vain — all the way around the Monmouth strip in the Sorority before settling for second.  But there’s some turf in her pedigree, and breaking from the outside might be an advantage here in a group that has plenty of speed.

Unhindered (15-1) and Kawfee Fa Marfa (12-1) are the other stake winners in the group.  Unhindered took Woodbine’s My Dear over the synthetic, and her one turf try — a third (via disqualification) against allowance foes — was inconclusive.  But new trainer Mike Trombetta sees enough to take the shot, and a return to her first couple of races would put her in the mix here.  Kawfee Fa Marfa, a Rick Violette trainee, certainly came out of the gate running in her career; her lone start to date was a five-length win in the Small Wonder for Delaware-certified runners.  There’s plenty of reason to think Kawfee Fa Marfa will take to the turf in her first time over it, too; her dam, Idealistic Cause, earned over $240,000 on the green, and among Kawfee’s half-sibs is Interpatation, who earned $1.2 million turfing.

Beyond the stakes winners, three others in this group already own turf wins.  Ham Smith trainee Miss Bullistic, a daughter of local stud Bullsbay, won nicely over the Laurel lawn in her first grass try, against maidens, and earned a competitve Beyer speed fig of 70.  Mercer Mill Mae’s lone turf try, against maidens at Kentucky Downs, was also a winning one; and trainer Wesley Ward is an ace with juvenile turf sprinters.  And Majestic Bloom closed nicely to win against New York-breds on the Saratoga lawn in her career debut.