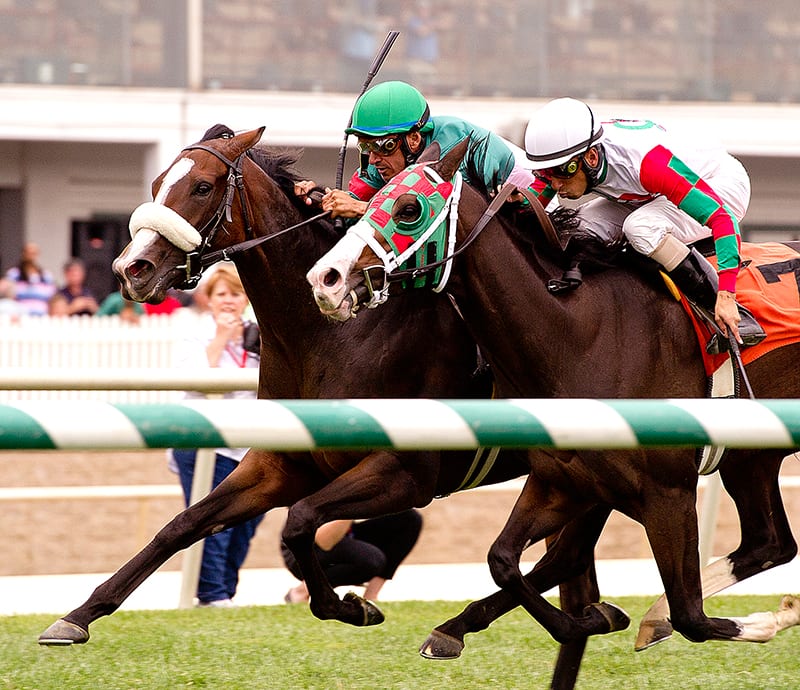 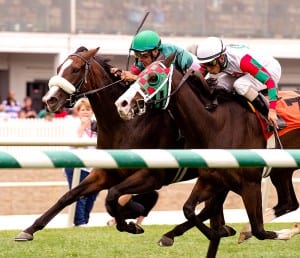 The Laurel Park racing office produced a terrific card Saturday afternoon. The 12-race program features over $800,000 in purses with more than 125 entries. The six turf stakes races drew a total of 74 runners.

“When I worked for Bill Mott I used to get on a lot of talented horses in the morning,” said Julian Pimentel, who will be riding the son of Parker’s Storm Cat for the 31st time Saturday. “But this is the best horse I have ever ridden in the afternoon.”

Heaven’s Runway, a winner at Saratoga on the turf last out against optional claiming company, is the 6-1 second choice in the Laurel Dash. Other contenders include Boltin’ Out (8-1) and Bold Thunder (8-1), who finished behind Ben’s Cat in Turf Monster (G3) and Parx Dash (G3) this summer.

“I have Ben’s Cat the lowest price on the card,” said Maryland Jockey Club handicapper Keith Feustle. “If the Cat stumbles it is anyone else’s ballgame. There is plenty of speed in the race so Ben’s Cat will have a target to run at. Grateful Nation (10-1) ran huge over this course last week and figures to get the jump on Ben’s Cat and hope he can hold him off.”

The $100,000 Laurel Turf Cup (race 10) will bring together 14 runners going 1-1/2 miles. Reflecting, from Shug McGaughey’s powerful string, is the 5-2 morning line favorite. The son of Elusive Quality enters the race off a second place finish in the Yankee Affair Stakes at Belmont Park at Saturday’s distance. Second choice Under Control (7-2) was second in Laurel’s Japan Racing Association Stakes earlier this month.

“Reflecting is very consistent and McGaughey is going to get plenty of attention at the windows,” Feustle said. “But this is a great betting race. There are two live longshots in here. Manchurian High (6-1) and St. Albans Boy (8-1), who I think is hitting his stride right now and is crying out for the extra distance.”

Madame Giry is the prohibitive 6-5 favorite over 11 others in the $125,000 Jameela Stakes (race 8) for Maryland-bred fillies and mares. The 5-year-old has won three-of-four starts at the 6-furlong distance.  Tizgale (7-2), Maryland Million Ladies winner Monster Sleeping (6-1) and C C Gold (8-1) figure to be the biggest threats to the defending champion.

“Madame Giry is certainly proven but the horse that intrigues me is Tizgale,” added Feustle. “She has been off since May when she had trouble in The Very One on Black-Eyed Susan day. She took some play that day but had no chance after a bad break. She is working forward to this spot and it will be interesting to see if she can rate off the speed.”

Scampering is the lukewarm 4-1 favorite among 14 fillies and mares in the 1-1/16th mile $100,000 Lady Baltimore Stakes (race 7). The McGaughey trainee won an allowance race at Saratoga in July before a dull performance in the Violet Stakes (G3) at Monmouth Park last month. Graham Motion has three live runners in the race: Lady of Gold (6-1), Joy (8-1), and Zucchini Flower (10-1).

“This was one of the hardest races I have ever had to line,” Feustle said. “I went back and forth and ended up making Scampering the favorite. She has maintained consistency on the turf though she was disappointing in her last start. A horse that beat her at Monmouth, Fasnacloich (8-1), is an up and comer. Hammy Smith is known to step up in these kinds of races. Graham is loaded. Lady of Gold looks like she is about ready to run her best race. This is a really good race. If the favorite is lower than 3-1 or 7-2, I would be shocked.”

A field of 10 is entered in the 5-1/2 furlong $100,000 Laurel Futurity (race 5) for 2-year olds. The even money favorite is Cyclogenisis, who left the maiden ranks with a three-length score on the grass at Saratoga in his only start.

“Cyclogenisis comes in off a big win on the grass,” added Feustle. “His 77 Beyer (speed figure) stands out over the field. He beat an eight-horse field with an explosive move to win clear. Nobody else in this race has any proven turf form.”

“The horse that she beat came back and was a clear winner at Kentucky Downs,” Feustle said. “This filly looks like she has a bright future sprinting on the turf.”