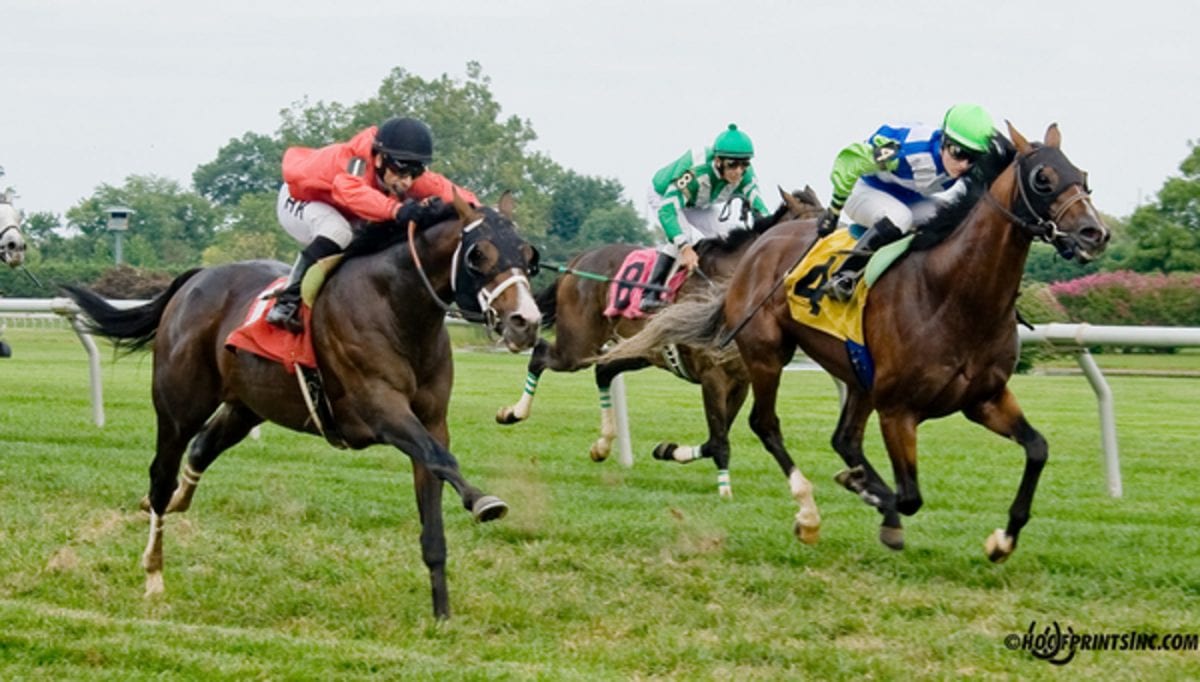 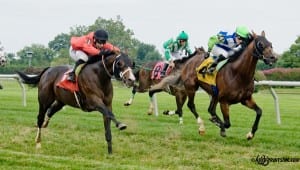 Other Cheek (right) gets pipped at the wire in his last start by Dramedy. Photo by HoofprintsInc.com.

The best horse Roy and Gretchen Jackson ever owned and one of the greatest Thoroughbreds of this generation took his first step to stardom over the Delaware Park turf course.

Barbaro made his debut over the Delaware infield course back in 2005 and went on to become one of the most popular stars of the sport with wins in the Florida Derby and Kentucky Derby before tragedy struck shortly after the start of the 2006 Preakness.

The Jacksons, who made a valiant but unsuccessful attempt to save their stricken star, have continued to race under the Lael Stables banner, and on Saturday their trainer Arnaud Delacour will send out a lightly raced but talented homebred Smart Strike colt named Other Cheek for his first career stakes start in the Grade 3 $150,000 Kent Stakes for sophomores at nine furlongs over the Delaware turf course.

No one is drawing comparisons between Other Cheek and Barbaro, and Delacour admits racing a colt with just three races under his belt against graded stakes company calls for a “leap of faith.”  But the French-born horseman said sometimes you have to give young horses a chance to show just how good they can be early in their careers.

“We realize Other Cheek will have to improve like four or five lengths to be competitive at this level,” Delacour remarked. “But he’s improved with each race and we were encouraged with his last start (against allowance/optional claiming company at a mile and a sixteenth on the turf) even though he was beaten right on the wire.”

Though a February foal, Other Cheek, who is out of the stakes-placed Seattle Slew mare Nice Nelly, did not debut until this July.

“He’s been a little immature and green and a little slow to come around and he likes to look around and fool around a bit, especially in the stretch,” said Delacour. “I think that’s one reason why he was caught last time. The other horse (Dramedy) was out in the middle of the course and he didn’t pick him up until the last minute. Otherwise, I think he might have resisted him a bit better.”

Which doesn’t mean that he was unhappy with his charge, pointing out, “They came home in :23 and change, and that’s really solid time.”

Other Cheek had some minor “growing pains” as a 2-year-old, and Delacour said the decision was made to allow him to fill out and come into his own, which delayed his debut. The Lael runner broke slowly in his debut at Monmouth and came from well back to finish less than four lengths behind the winner in a mile turf test. He broke much sharper in his second start when he led most of the way in a mile and a sixteenth maiden tilt at Penn National to leave the winless ranks by a length and a quarter.

In the Kent, Other Cheek will break from the two slot in the seven horse field. He looks to have the best early speed of the group, but Delacour says it’s not imperative he be in front.

“He’s certainly an eager type of horse and likes to run on, but I’m not convinced he’s strictly a speed horse,” the conditioner said. “I’ll let the rider decide how to place him. I’m sure he’s going to be close up. [W]e realize this is a big challenge for this horse but he’s doing great right now. He seems to be learning a little more about how to be a race horse every time he runs and like I said before, sometimes you have to give them a chance to surprise you.”