The 8-year-old is the fourth choice, at 5-1, in the Dave’s Friend, a 6-furlong test on the main track and is a 12-1 morning line shot in the Japan Racing Association at 1 1/16 miles, scheduled to be contested on the turf. Forest Boyce will ride. 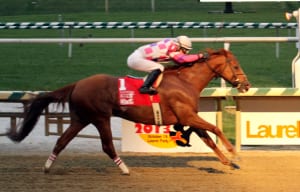 “It all really depends on weather,” Keefe said. “He has run well on the turf. He has run in the Japan twice, once on the turf (2012) and once on the main track (2011) when he won. The year he finished fifth was a remarkably good race off a layoff and I think he can handle the turf. I cross-entered him in the Dave’s Friend because it is a shorter field and definitely on the dirt. I am leaning towards that one unless the Japan comes off the turf then we would go that route. Obviously three-quarters is not his best distance but he broke his maiden at the distance early in his career and he is very sharp right now. He is so smart. He knows he is getting ready to run. He knows my routine. This isn’t the perfect scenario because one race is not his preferred distance and the other is not his preferred surface but we gear everything up for Maryland Million day.”

Keefe said Saturday’s season debut will be used as a prep race for the $150,000 Maryland Million Classic on October 18, a race Eighttofasttocatch has won two of the previous three years, including a 3-1/4 length victory last year.

“We gave him time off at the beginning of the year and were hoping to run at Pimlico but he was getting a little filling in one of his ankles that he had not had before so we decided to stop so he could be fresh for this meet,” added Keefe, who will run in the Chicago Marathon six days prior to Maryland Million. “We are going to retire him at the end of the year. I could have brought him back sooner but that would have meant shipping around during the summer and to me that doesn’t make a whole lot of sense.”

After finishing third in the 2010 Maryland Million Turf, the son of Not For Love has responded with 12 victories in 26 main track starts, including 10 stakes scores. He is currently 15-of-46 lifetime and is just $85,415 shy of becoming Keefe’s first millionaire.

“Right now I am thinking three races to end his career as long as he is healthy: Saturday, the Maryland Million Classic and the Jennings Handicap (Dec. 6), a race he has won three years in a row,” Keefe said. “It would be great for him to reach the million dollar milestone. He has been the best horse in my barn in terms of earnings on the track and because of his personality. He is a wonderful horse to be around. He will retire to our farm and we’ll try to turn him into an event horse.”

Thirteen runners are entered in The Japan Racing Association Stakes with Legendary set as the 8-5 morning line favorite. A minor stakes winner in Great Britain, the Niall Saville trainee has made four starts in the United States this year, posting two wins at Belmont Park and a third place finish at Saratoga in the Lure Stakes. Sheldon Russell has the mount.

Seven sprinters are entered in the $100,000 Dave’s Friend and Bern Identity is set to break from the rail as the 9-5 morning line choice. The Indian Charlie colt is two-for-two this year after winning the My Frenchman and Tie The Cat Stakes, at Monmouth Park and Saratoga respectively for trainer Kelly Breen. Multiple stakes winner Trickmeister is 5-2 second choice.

The $100,000 Thirty-Eight Go Go at a mile on the main track goes as the sixth race. The 9-5 favorite is Sheer Drama, who will carry Trevor McCarthy for trainer David Fawkes. She’s made three stakes starts, with her best effort a second place finish in Belmont’s Belle Cherie last year. She’ll meet six other fillies and mares, including Delaware Park’s Justakiss Stakes winner South Andros.

The first stakes of the afternoon is the $125,000 All-Brandy (race 4) for registered Maryland-bred fillies and mares at a mile and an eighth on the turf. Graham Motion’s Joy, the 7-5 program favorite, won the Christiana Stakes at Delaware last year and the Perfect Sting Stakes on the yielding turf at Belmont on July 4. She will carry Alex Cintron against seven others including 9-5 second choice Nashly’s Vow, a four-time winner on the grass.