The Racing Biz has been tracking claiming activity in the mid-Atlantic region and reporting on it weekly for the last several months, in our Claimbox report.  We continue that, along with our Midlantic Claiming 7 — the trainers who have been busiest over the prior 30 days, ending in this case on August 19, 2014.


A sluggish week of mid-Atlantic claiming activity nevertheless led to significant turnover in the Midlantic Claiming 7 list of the region’s trainers who have claimed the most horses in the last 30 days.

Still, the name at the top of that list is a familiar one.  Patricia Farro has claimed 13 horses in the last 30 days to lead all trainers by a comfortable margin.  It the third straight week she topped the list.  Jorge Navarro, with eight claims, is second; and John Locke has seven.  Farro was also the only trainer whose claims topped $100,000 in total value, reaching $193,000 as a group.  Hugh McMahon led the top seven in the average value of his claims; his five were worth a total of $87,000, an average of $17,400.

There was considerable turnover among the group.  Scott Lake, Kieron Magee, and Howard Brown, Jr. all dropped off.  They were replaced by Locke, Ramon Preciado, and Michael Pino.

Farro also led all trainers in net gain of horses.  She’s lost just two at the claimbox in the last 30 days, giving her a net gain of 11.  Locke was second in this category, with a net gain of four.

Claiming activity was slow; fewer horses were claimed than in any week since June, and their dollar value hit a low not seen since April.

Parx Racing was the region’s busiest track with 15 horses claimed, and the value of those horses — $153,500 — was also tops.  The average value of the 10 horses claimed, $11,250, was the highest in the region.  Penn National also saw 10 claims during the week, while Delaware had five and Charles Town, just three. 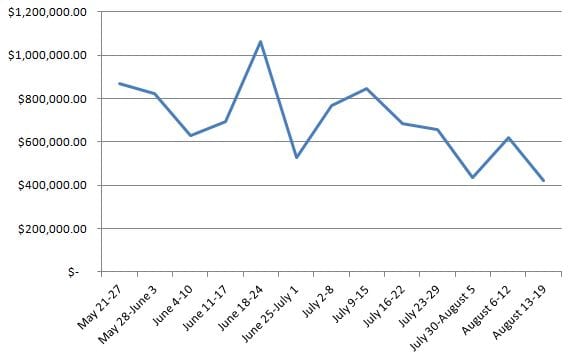