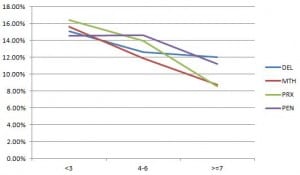 Conventional racing wisdom tells us that post position matters and that it matters most on speed favoring tracks, where inside horses can gain an advantage by zipping to the front and staying there.

Among mid-Atlantic tracks currently racing, Monmouth Park and Delaware Park generally have reputations as the region’s speediest tracks.  In separate interviews, for example, both of Delaware’s top two riders this meet, Alex Cintron and Daniel Centeno, suggested that the track’s speed bias significantly influences the tactics they use.  That suggests these facilities would be the tracks where post position mattered most.

Well, yes.  Except when no.

We reviewed Equibase post position data from the dirt races at Monmouth, Delaware, Parx Racing, and Penn National in 2014.  We excluded Charles Town because the track, with its bullring configuration, cards races around one, two, and three turns, making comparison with standard-sized tracks difficult.

Certainly, Monmouth lived up to its billing.  Indeed, Monmouth’s two-turn races were more biased by post position than any races run at the other tracks.  The inside three posts at Monmouth won at a 15.6 percent clip (102 wins from 654 starts), versus just an 8.71 percent win rate for horses starting from the seven-hole or farther (40 out of 459).  What’s more, the correlation coefficient for post position versus win percentage was -.877, which indicates a very strong relationship (in other words, as post position goes up, win percentage goes down, and those move in near-lockstep).  That was the strongest such relationship among the four tracks. 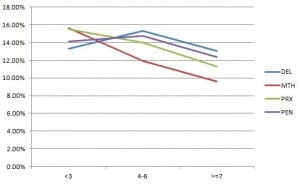 As for Delaware, however, the data tell a different story.

At route distances, Delaware shows a stronger correlation (-.514) than at sprint distances — but it’s nowhere near as clear as Monmouth’s.

As for the other two tracks, Parx Racing’s numbers looked very much like Monmouth’s, while Penn National’s were more akin to those from Delaware.  Indeed, in Parx’s route races, the difference between the strike rate of the inner three posts and posts seven and beyond was nearly eight percent — 16.44 percent to 8.52 percent — the largest such gap.

OTHER FACTS AND FIGS