Bayern will arrive for Haskell on Thursday 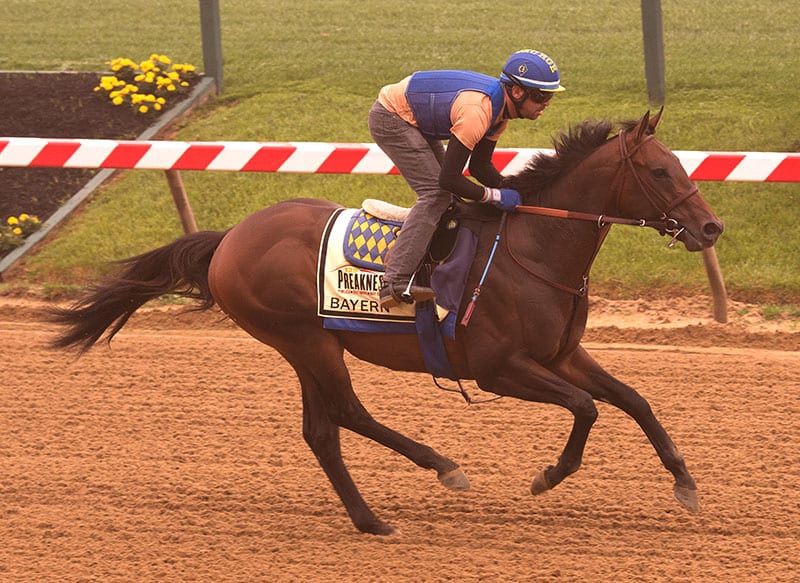 After breezing five furlongs in :59 1/5 over Del Mar’s all weather surface Monday morning, Baffert, who has trained a record six Haskell winners, confirmed the son of Offlee Wild for the mile and an eighth Haskell and that Martin Garcia, who was aboard for the work, will be aboard in Monmouth’s Grade 1 race.

Garcia, no stranger to the Haskell, won this race in 2010 atop Lookin at Lucky and again in 2011 with Coil.  A win on Sunday would tie him with Craig Perret for most Haskell wins by a jockey.

Bayern, who whistled to a 7 ½ length victory in the seven furlong Woody Stephens Stakes (G2) on Belmont Stakes Day, has won three of his six starts for owner Kaleem Shah Inc.  He won his debut on Jan. 4 of this year and took an entry level allowance next out in February, both at Santa Anita.  After a third-place finish in the Arkansas Derby (G1) he put his nose down first in the Derby Trial (G3) only to be disqualified to second.  He followed that up with a start in the Preakness Stakes and then his dominating score in the Woody Stephens.

Irish You Well, who took the Long Branch Stakes over the Monmouth strip on July 5, has been stabled here since May.  As a maiden he took on graded stakes company, finishing third in the Illinois Derby (G3) at Hawthorne and the Peter Pan (G2) at Belmont Park.

“He’s been there for quite a while and he loves the track there,” said trainer Wayne Catalano, who conditions Irish You Well for Donegal Racing.  “He broke his maiden on it and has been training well over it.

“He was third behind Tonalist and Commissioner in the Peter Pan and they went on to be one-two in the Belmont, so he deserves his shot.”

Irish You Well will get a new rider in Jose Lezcano in the Haskell, as that duo will face a field that is expected to include the filly Untapable as well as  Albano, Encryption, Just Call Kenny, Medal Count, Social Inclusion and Wildcat Red.  The field for this year’s 47th renewal of the Haskell will be drawn at noon on Thursday, July 24.

“There is no question that it’s a tough, touch race,” Catalano said.  “This is a big test for him, but he’s been over that surface and he’s been running well so everybody wants to give it a shot.”