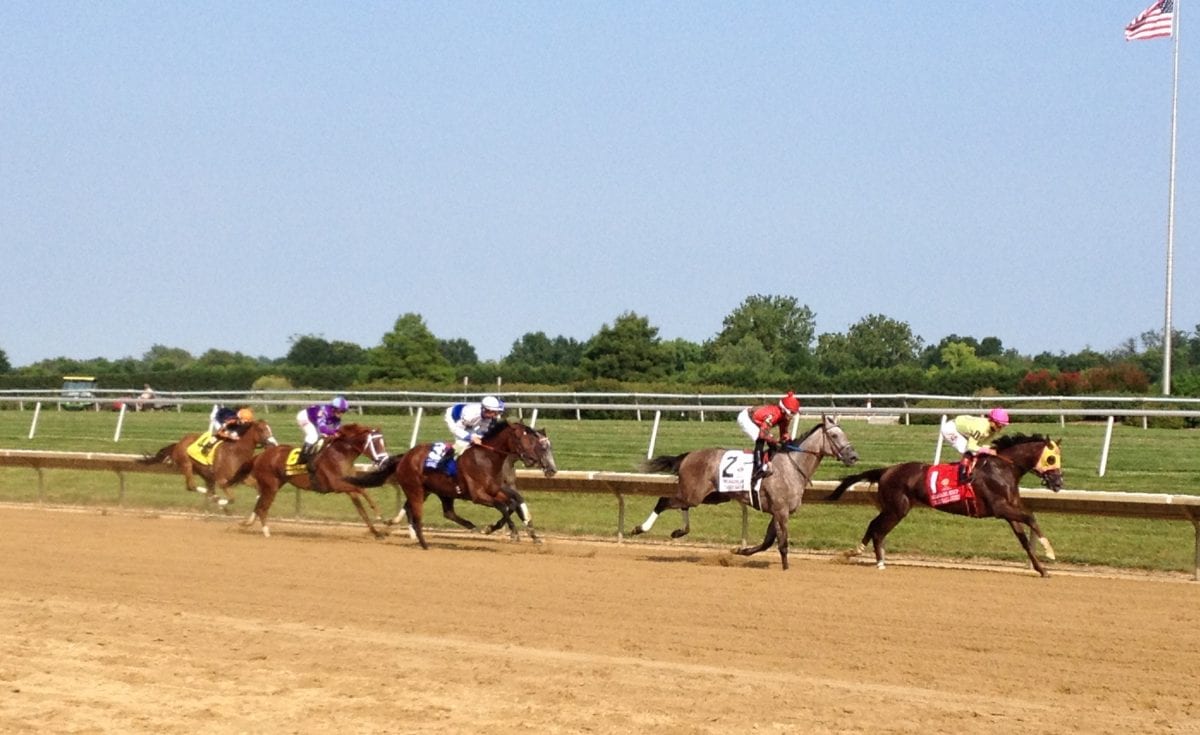 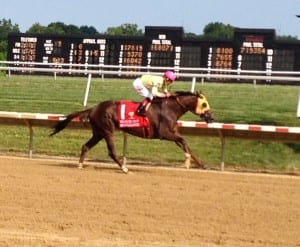 Belle Gallantey edges away. Photo by The Racing Biz.

The five year-old mare was a racing non-entity, a horse who had made 36 career starts, had only four wins and still had yet to win her first allowance condition.  She’d been claimed four times in her career and, after starting out in Southern California, had raced since mid-2012 in New York.

Yet none of it had made much difference.

That she would become, by Saturday evening, a Grade 1, Delaware Handicap winner and conqueror of 1-5 favorite and four-time Grade 1 winner Princess of Sylmar — well, let’s say that it didn’t seem likely at all.

Certainly, it’s not what trainer Rudy Rodriguez, who became the fifth — and almost certainly, final — trainer to claim the daughter of After Market, envisioned when he dropped the claim slip.

“We was looking for horses for the winter, and she looked like she could go two turns on the [Aqueduct] inner track,” explained Rodriguez, who’s been training on his own for less than five years yet has racked up more than $20 million in purse earnings.

“In the winter, there’s not much,” he added, meaning, not very many competitive horses at Aqueduct.

That’s something of an understatement.  Switched into the Rodriguez barn and stretched out to route races, Belle Gallantey notched three consecutive open-length victories, inspiring Rodriguez and owners Michael Dubb, Bethlehem Stables LLC, and Gary Aisquith to take a crack at the Grade 1 Ogden Phipps.

She finished fifth that day, at odds of 25-1, but a closer look at the chart shows that she lost by less than two lengths after a less-than-perfect trip.

“Last time she showed she could compete with this group,” Rodriguez noted.

“Up until Wednesday, we weren’t coming,” said co-owner Mike Caruso, who races as Bethlehem Stables LLC.  “We don’t want to run horses over their heads because sometimes it just knocks them out. And this one had such a good race in the Ogden Phipps and lost by two.”

And there were question marks, which an ebullient Caruso ticked off: “She’s never gone a mile and a quarter; had the biggest race of her life last time – would she bounce?  Never has really won on the front end – usually she likes to lay off a little bit.”

Yet Caruso, who grew up making a once-a-year journey to Monmouth Park, and Dubb kept coming back to that bit about the front end.

“The thing we kept talking about was no speed,” Caruso said.

That lack of speed meant that Belle Gallantey would likely be able to control the pace up front.  If she did, she’d have at least a puncher’s chance of taking the field a long, long way. 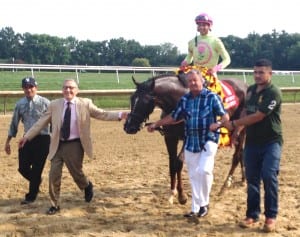 “I said, ‘Mike, how many times do you get a chance to run in a grade 1?'” recounted Caruso.

Finally, they decided to go for it.  “Truthfully, I think we would have been pleased if we were on the board,” said Caruso.  “Now we’re ecstatic.”

Belle Gallantey led at every call, doled out moderate fractions early, and kicked home nicely late, with the last quarter mile her fastest of the race.

Rodriguez cited her calmer demeanor as the key difference in her success.  “We are just rying to do little stuff that works for us and getting her to settle because she was very nervous,” he explained, “make sure she relaxed and be comfortable.”

He added, “We treated her very good, and she’s treated us excellent.”

All of which added up to a lot of smiles in the winner’s circle.

“You got to take these moments in life, and anything, because you don’t get a lot of them,” said Caruso.  “This is what you live for.”