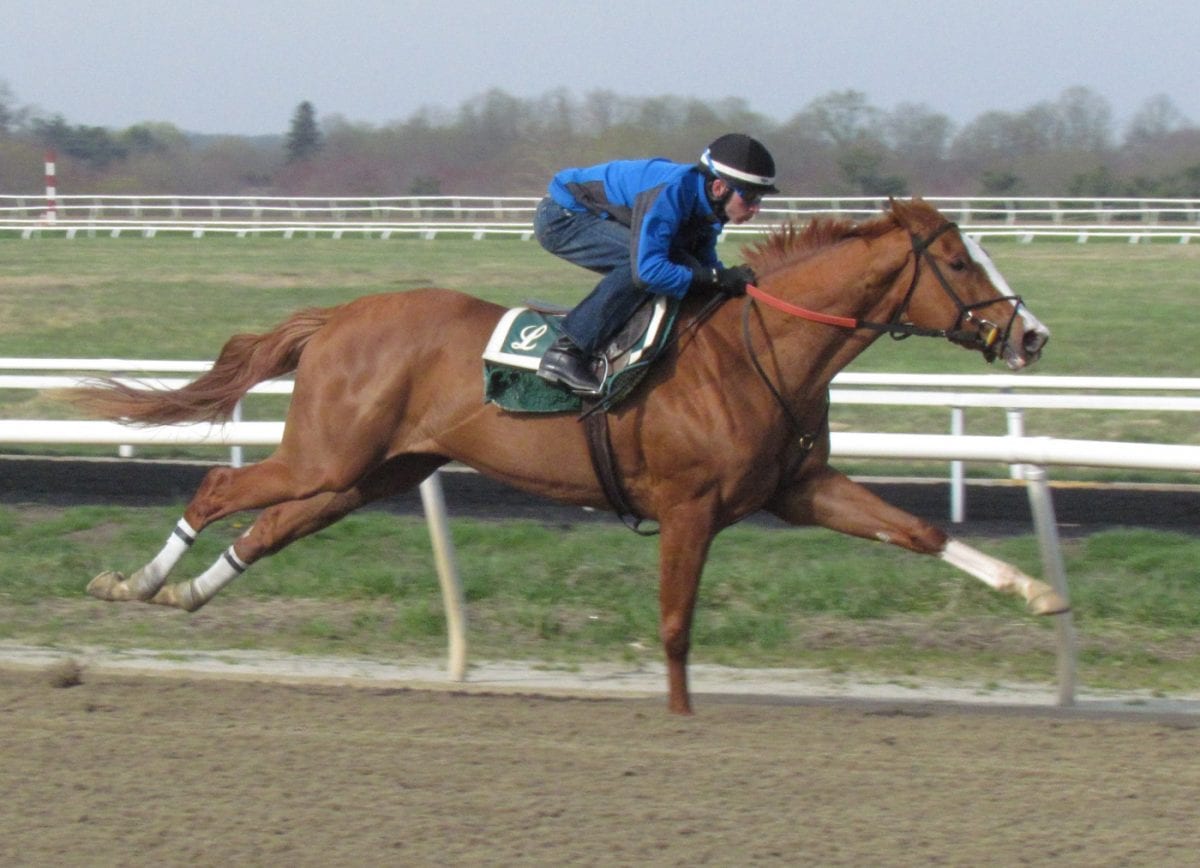 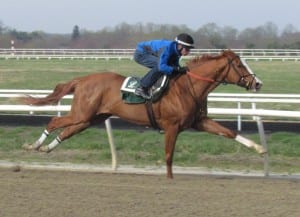 Pixie Dust stretches her legs in a morning work. Photo by Fenneka Bentley.

James L. “Chuck” Lawrence, II grew up watching some of the greats of racing compete at Delaware Park in races like the Delaware Oaks and Delaware Handicap.

Such stars as Light Hearted, Desert Vixen, Proud Spell, and Blind Luck have captured the Delaware Oaks.  Now, after training for more than 30 years, Lawrence will get a chance to be part of Oaks history on Saturday when he sends his homebred Pixie Dust out in the Grade 2, $300,000 fixture at a mile and a sixteenth.

Pixie Dust, a Pennsylvania-bred daughter of Ecclesiastic out of the Sea Salute mare, Seagrapes, will be making her fifth career start in the Oaks and will also be trying two turns and open company for the first time.  But Lawrence says everything Pixie Dust has done both in the mornings and in her races has him convinced the filly will be right at home racing at middle distances. Her mother has produced two $100,000 winners; her half brother, James Lee, won over $141,000 with all of his wins coming in route races.

“She’s very manageable,” Lawrence pointed out the other day as he returned to his home after running at horse at Belmont, “and she’ll do anything you ask her to do. I can put anybody on her in the morning because she just lopes along like she doesn’t have a care in the world until you ask her. Then when it’s time to go, she goes.”

She broke her maiden by more than four lengths against state-breds at Parx Racing in April.

“The day she broke her maiden, she broke in front of her field and Alex (Cintron) took her back off the lead and she had no problem with that at all,” recalled Lawrence.  “Then when he asked her she kicked in like a good horse. She has tactical speed but she’ll relax for you and she really likes to run by horses.”

Pixie Dust has two wins, a second, and a third from four starts.  She finished third in her only try against stakes horses, in the New Start at Penn National when she was beaten less than a length.

With several speed rivals in the field, like Honey’s Ryan, Image of Anna and Vero Amore, and with Pixie Dust drawing the rail, Lawrence is hopeful his charge will get the perfect stalking trip.  She’ll have Cintron aboard, as he has been in all of her races.

“Certainly being able to have Alex on her was a factor in us going in the Oaks,” the trainer admitted.  “He’s gone to Penn National twice to ride her, he comes to Fair Hill to work her and really likes her. If you’re going to run against this type competition you don’t want to have to go into the race having to use a rider who’s never been on your horse before.”

Of course, it also doesn’t hurt that Lawrence feels a personal connection to the Delaware Oaks.

“I had a race at Parx picked out for her (Pixie Dust),” the trainer said, “but I grew up watching the Oaks and DelCap, and it’s always been a dream of mine to someday win one of those races. I don’t know if she has the quality it takes to beat these kind of horses but we’re going to take a shot.”

Pixie Dust races for the Lawrence Stable, which is comprised of the 48-year-old trainer, his wife Beth, 5-year-old son Chace and 3-year-old daughter Ashby.