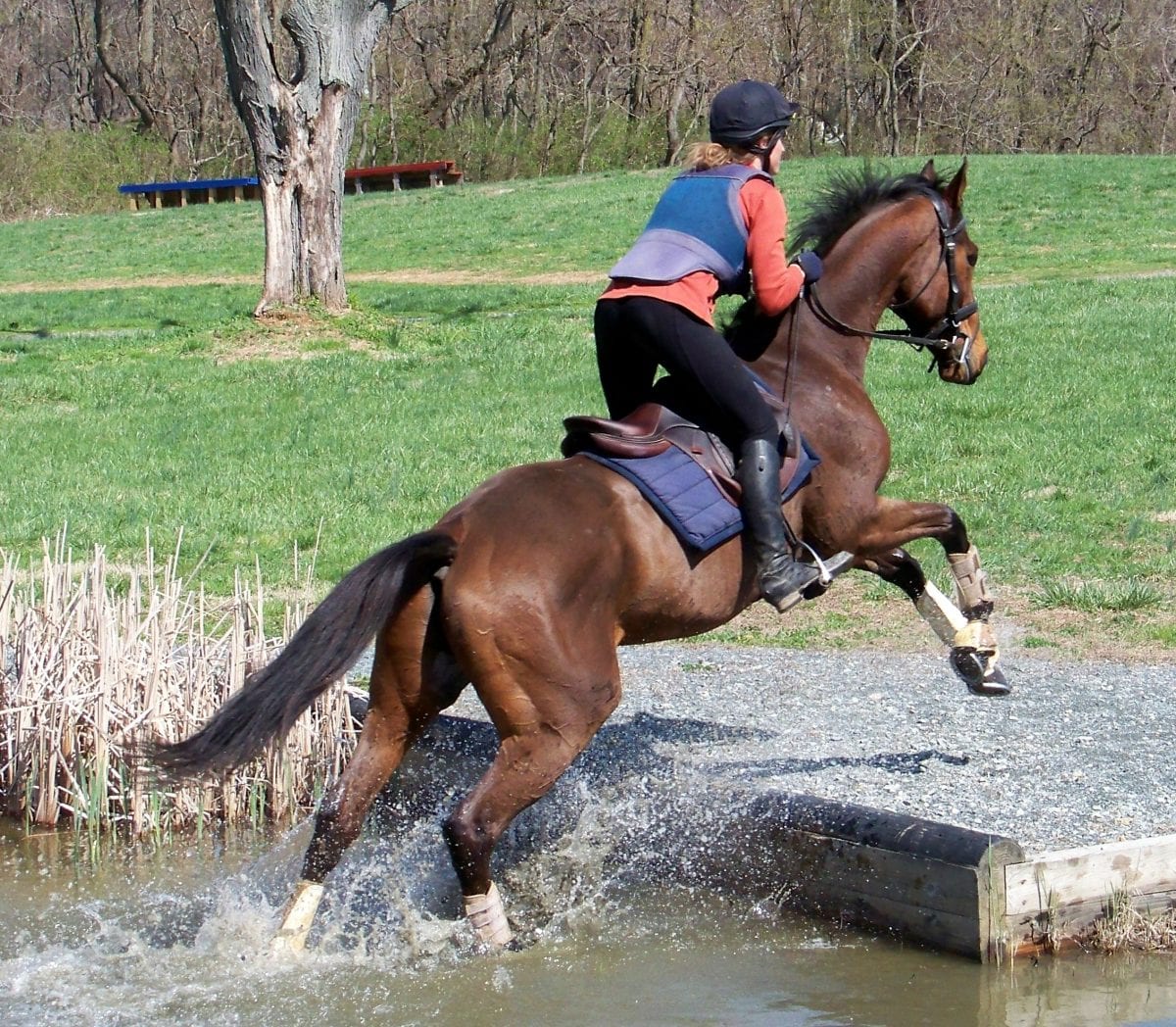 In early March, Maryland-based trainer Pat Dale was preparing Third Regiment, a Pennsylvania-bred retired Thoroughbred racehorse, for the next step in his second career: a performance in the Battle of the X’s in Texas, after which he’d be auctioned off to a buyer approved by Remember Me Rescue, which was coordinating the event. 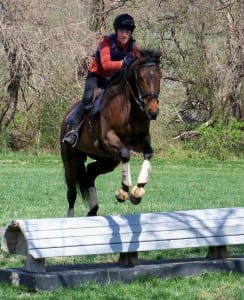 With thirty years of experience buying, training, and selling horses, Dale knows that what she does is a business, and through the course of her career, she’s bid farewell to dozens, if not hundreds, of horses. But this one was different.

“I’m going to cry when I leave him,” she said at the time.

And cry she did, as she left Texas and drove home with an empty trailer. But before long, the tears of sadness turned to tears of joy, when she learned that Third, along with four of his former stablemates, was coming back to her farm for good.

Owned by Rich and Karen Papiese’s Midwest Thoroughbreds during his racing career, Third Regiment was one of three horses the racing and breeding entity bought back at the Texas auction so they can serve as what the Papieses are calling “OTTB [off-track Thoroughbred] ambassadors.”

“We thought these horses had a lot of ability to be good ambassadors,” said Rich Papiese. “Pat will assess them and let us know what they’re best suited for.”

In addition to Third Regiment, the Papieses sent Home Field and Stevender to Dale after the Battle of the X’s; they have also placed Jawbone (another PA-bred) and Impy’s Star with her to be re-trained.

But unlike most of the horses Dale works with it, these five will not be retrained and then sold; instead, they will serve as models of what off-track Thoroughbreds can do, competing in Thoroughbred classes at horse shows, showcases, and exhibitions.

“We want to bring more attention to what Thoroughbreds can do off the track,” explained Papiese. “We want to get more people involved, so they can see the intelligence and athleticism of these animals.”

Since getting back to Dale’s Three Plain Bays Farm in Conowingo, Maryland in April, Third has participated in a couple of combined tests, one at Fair Hill, one at Blue Goose in Cochranville, Pennsylvania. Though still green, he “absolutely behaved himself,” said Dale.

“The whole premise was to see how he handled the experience, and he handled it with all the class in the world,” she said. 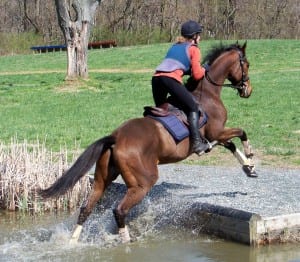 Third Regiment and Tara Ziegler splash around the course. Photo by Pat Dale.

Though he can be distracted, he doesn’t spook, a result, said Dale, of the time he spent at the track.

“That’s where being a racehorse is a huge advantage,” she explained, “because they see so much at the track.”

He didn’t jump completely cleanly, but after competing in the show ring, said Dale, he “sauntered” to the cross-country course.

“He rocketed around, totally in control, and handled every single element like he’d been doing it his whole life,” she said admiringly. “Then he walked back to the trailer smoking a cigarette with a swagger.”

She also said that one of the dressage judges remarked that when he’s further along in his training, he’ll be “brilliant.”

Unfazed by water, he jumped off the bank and galloped through the lake; ridden by four-star advanced three-day competitor Tara Ziegler, the farm’s resident rider, he was definitely in the bridle but manageable, said Dale.

Home Field will shortly begin a jumping career, and both Impy’s Star and Jawbone, an unraced three-year-old, will be pointed to eventing. Stevender, Dale said, will be a “spectacular” all-around horse.

While devoted to all of her horses, Dale makes no secret of her particular affection for Third.

“This horse has totally stolen my heart,” she admitted.

He acts like a big horse, she said, and he won’t eat treats of any kind, but he seemed happy to be back when he arrived in April. Like all the Midwest horses at Three Plain Bays, they will be cared for throughout their lives by the Papieses, who contributed a barn to Remember Me Rescue’s Texas facility and who hope to expand their aftercare efforts in the Mid-Atlantic, where many of their horses races.

“If we can be a small part of making things better, we want to,” said Papiese.

You can follow the horses’ progress at the Facebook pages for Three Plain Bays and Third Regiment.