For Aldana Gonzalez, “confidence to take the chance”

Aldana Gonzalez grew to love horse racing as a youngster watching her aunt Blanca Gonzalez ride in her native Argentina.  Then, 12 years ago she followed her aunt to the U.S., a 23 year-old greenhorn with a dream. 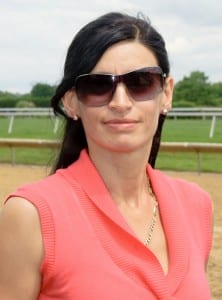 “Yes, I loved racing but had a lot to learn when I arrived in this country,” Gonzalez admitted the other day.  “I started like most folks do, on the end of a shank as a hotwalker.”

Fast forward to 2014.  Gonzalez has risen through the ranks, and this summer she’s at Delaware Park as the trainer of 22 head for Canadian owner and breeder Bruno Schickedanz. Gonzalez who worked with top horsewoman Joan Scott for five years, took over a division of Schickedanz’ horses at Tampa Bay Downs this winter, winning eight races at that meeting.

Since moving to Delaware Park Gonzalez has gotten off to a good start, winning with three of her 11 starters while finishing second with two  others for a 27 per cent win rate. Her first six months heading up a stable have been a learning experience, and Gonzalez says that lessons learned working under Scott have been an invaluable help now that she is on her own.

“Joan Scott is such an outstanding horsewoman, and she is also an amazing businesswoman,” Gonzalez.  “Being able to work with her, to watch how she handled different problems with horses, and also how she handled dealing with others like vets, farriers, and of course, her owners, was an education I couldn’t have gotten anywhere else.  It was a big gamble leaving the spot I had, but the knowledge I’d gained watching Joan and being around her gave me the confidence to take the chance.”

Schickedanz, a multi-millionaire land developer and homebuilder from Canada, has won more than 2300 races and $34,000,000 in 34 years as a thoroughbred owner and breeder and has been the leading owner in races won in Canada 10 times. He was also the center of some controversy in 2010 when his Canadian Horse of the Year Wake at Noon broke down on the track at Woodbine at age 13 after having been retired for several years.

Initially banned from Woodbine for one year, Schickedanz appealed the ruling to the Ontario Racing Commission and after several hearings on the matter Schickedanz’ suspension was stayed and he was placed on probation by the Ontario Racing Commission on the condition he pay for $34,000 in expenses incurred by the ORC investigating the matter and donate $16,000 to a local university for equine research.

“I had heard about [the controversy], and I talked with Mr. Schickedanz about it and also talked to other people in the organization including his farm managers,” Gonzalez explained.  “He also said Wake at Noon was a personal favorite of his and that he visited him almost daily on the farm and would have never knowingly done anything to harm him or threaten his well being.”

Gonzalez added, “After talking to him and other people in the organization I felt confident I was going to work for an organization that had a commitment to do the right thing with their horses from a health and welfare standpoint.”

Gonzalez admits her string is basically a “blue collar” group with few high profile runners.  But she has high hopes for Dash of Dazzle, a homebred Sardegna gelding who left the winless ranks at Tampa in April while posting a very good 1:10.39 time for six furlongs.

“He was beaten just over a length here in a tough optional allowance sprint here on opening day and came back today, (Friday) to work a very sharp half in :48,” she said.  “He’s a nice, honest sort we hope we can do some good with here.”