Welcome to the Preakness, California Chrome 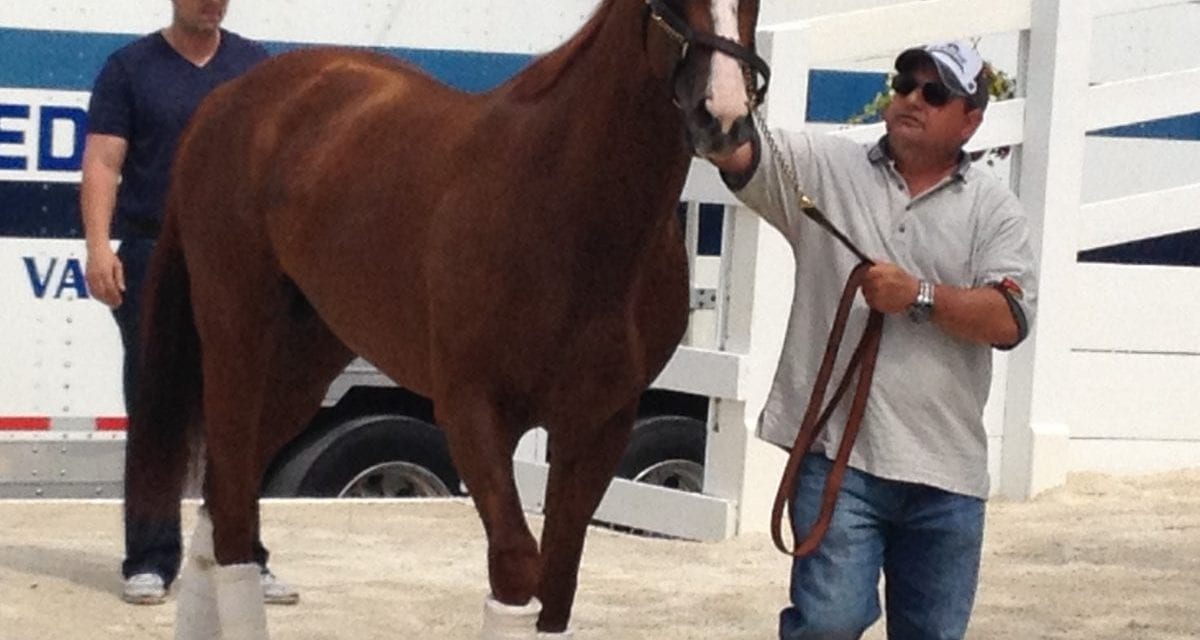 The 3-year-old California-bred colt, who captured the Run for the Roses at Churchill Downs by 1 ¾ lengths on May 3, was soon joined at Pimlico by Preakness candidates Ride On Curlin and General a Rod, who accompanied the Derby winner on his flight from Kentucky but arrived on another van.

California Chrome, who has won five stakes races in a row by a combined 26 lengths, is expected to be heavily favored to win the $1.5 million Preakness and become the first California-bred to capture the Middle Jewel of the Triple Crown since Snow Chief made his way into the Pimlico winner’s circle in 1986. Three other California-bred horses – Candy Spots (1963), Kalitan (1917) and Old England (1902) – had previously prevailed in the 1 3/16-mile spring classic.

Alan Sherman, the assistant trainer for his father Art Sherman, was at Pimlico to greet California Chrome, who was bedded down in the Preakness Stakes Barn in Stall 40, the stall traditionally reserved for the Kentucky Derby winner, as photographers snapped his every move.

“Everything went great,” said Sherman, whose father returned to Southern California a couple days after the Kentucky Derby to tend to the rest of his stable based at Los Alamitos. “He just stood there. He loved getting his picture taken.”

The 77-year-old Art Sherman, who became the oldest trainer to saddle a Kentucky Derby winner on May 3, will be making his first visit to Pimlico after his scheduled arrival in Baltimore on Tuesday. He is not a complete stranger to Maryland, however, having ridden at old Bowie Race Course in 1959.

Following training hours at Churchill Downs Monday morning, California Chrome and the others were vanned from Louisville to Lexington, Ky., where they boarded a flight that landed at Baltimore-Washington International Airport at 1:46 p.m. The vans carrying the trio of Preakness contenders, as well as other candidates for Preakness Weekend stakes, received a Baltimore City Police Dept. escort to Pimlico.

Alan Sherman said he’d send the Derby winner to the track Tuesday at 6:45 a.m. but is undecided whether he’ll jog or have a light gallop.

“I haven’t made up my mind. We’ll see how he eats up tonight,” said Sherman, who reported that California Chrome would not have another workout leading up to the Preakness. “He’s fit. I’m not worried about him being fit.”

Sherman expressed no qualms about bringing back California Chrome in the Preakness on just two weeks rest.

“I’m not scared, I’m just excited,” he said. “It’s quite the experience. We’ve never gone through anything like this before.”

Ride On Curlin, trained by Billy Gowan for owner Daniel Dougherty, closed from 19th and last  in traffic to finish seventh in the Derby, 6 ¾ lengths behind California Chrome.

“He shipped good,” said Gowan after 10 or 15 trips around the shedrow of the Preakness Stakes Barn with Ride On Curlin. “He’s got a good mind; nothing much bothers him. I rode on the plane with him and in the van with him. It was good. We got a police escort, so we didn’t have to stop.”

Gowan said he’ll take the colt out for a gallop over the Pimlico surface Tuesday morning at about 8:30 a.m.

Mike Maker-trained General a Rod, who is owned by Skychai Racing and Starlight Racing, finished 11th in the Kentucky Derby following a troubled trip.

“The trip was no problem, everything was very good,” said Joel Berrenlos, exercise rider for General a Rod, who will be stabled in Barn D. “He looks good and he’s ready to go to work, so we’re hoping for the best.”

Maker was due to arrive later Monday evening.

Pablo Del Monte had been scheduled to fly with the Derby winner Monday before trainer Wesley Ward made a late decision to postpone his departure from Kentucky. Pablo Del Monte is slated to join fellow Preakness candidates Bayern, Dynamic Impact and Ria Antonia on a flight originating from Louisville on Wednesday.

Vina Del Mar Thoroughbreds and Black Swan Stable’s Kid Cruz made an early evening arrival Monday at Pimlico. The Linda Rice-trained son of Lemon Drop Kid, who was slated to van from Belmont Park, captured the $100,000 Federico Tesio Stakes at Pimlico on April 19.