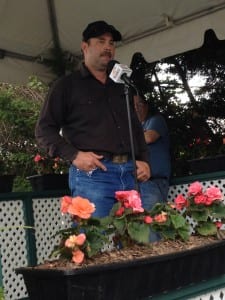 A phalanx of police motorcycles pulled into the parking lot behind Pimlico’s grandstand, followed by three long horse vans.

A crowd of media milled around.  A photographer yelled at everyone to get out of his way.  A helicopter whirled overhead.

Bronco Billy Gowan, Ride on Curlin’s trainer, flew with his horse, then took the van from Baltimore-Washington International Airport to Old Hilltop.  When was the last time you had a police escort? a reporter asked him.

Gowan, who knows a softball when he sees one, laughed.  “When I went to jail,” he said.

Gowan had the air of a man happy to be where he was — and why not?  Ride on Curlin, who ran second in the Grade 1 Arkansas Derby and third in two prior graded stakes before finishing seventh in the Kentucky Derby, has earned him that much.

And quite a dream it is for a trainer who told the assembled masses he has just four horses in training — though, he hastened to add, he also has two babies getting ready for the track.

The 48 year-old has been training since 1994 but never had more than seven wins in a calendar year, or earnings topping $122,000, until Ride on Curlin came along.

The son of Curlin out of the graded stakes-placed Storm Cat mare Magical Ride has earned more than $414,000 in 10 starts with eight in-the-money finishes.

Of course, Gowan won’t be the only optimist on the grounds, for another few days, at least.

For one thing, the Triple Crown dream, unfulfilled these last 35 years, remains alive until at least Saturday. 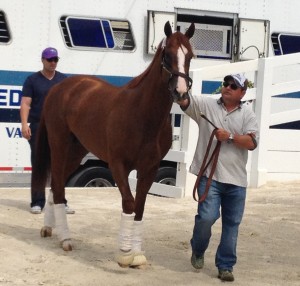 California Chrome makes his way off the van — finally.

Three Preakness-bound Derby horses arrived in the motorcade, but, truth be told, the crowd only cared about one of them: Kentucky Derby winner California Chrome.

The flashy-looking chestnut, owner of five consecutive wins following his boffo Derby performance, was dubious about the crowd when he arrived.  He poked his head out, surveyed the scene, then dug in his heels.  He wasn’t moving.

Eventually, his handlers turned him around and backed him off the van, butt first.  Surely, there’s symbolism of one sort or another there.

Once free of the van, Chrome turned and seemed to bask in the attention.  “I think he loves it,” said assistant trainer Alan Sherman.

Sherman himself seemed less enamored of the attention but did allow, “We’re just being us.  It’s an awesome feeling having a horse of this caliber,” something, he said, that had not previously happened to their operation, run by his father Art.

Meanwhile, around the corner, Social Inclusion and his people watched the hubbub with something approaching bemusement.  Social Inclusion had been the stakes barn’s only Preakness-bound resident since last Thursday and now had company.

That’s not lost on Sanchez, who described Azpurua as something of an idol in his native Venezuela when the younger man was growing up.

“He never had the right horses [to win classic races],” Sanchez said of Azpurua.  “Now in the last years of his life, he’s getting what he deserves: good horses.”

He has one of those for sure in Social Inclusion, who burst onto the scene with a shocking 10-length score — in track record time — over the highly touted Honor Code in a Gulfstream allowance.

His follow-up, a third place finish in the Grade 1 Wood Memorial, did nothing to tarnish his rep.

Now, suggested rider Luis Contreras, who flew in from his Woodbine base to breeze the horse this morning, he might be doing even better than before.  Repeatedly, he described the horse as “very light” as he cruised across the Pimlico surface, a contrast, he said, to the track surface at Aqueduct for the Wood.

Certainly, in the moments after the horse’s half-mile work, in 47 seconds flat, there were smiles aplenty on the faces of his connections.

For them, Preakness season had already begun.

And for Sanchez, who turned down a reported $8 million offer for his prize colt, the chance to share it with Azpurua made it about more than brown horses running in circles.

“To tell you the truth,” he said, “this is the dream of a lifetime.”