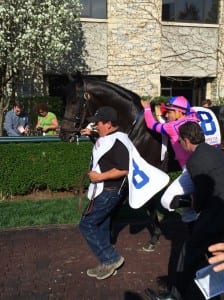 Dance With Fate about to win the Grade 1 Bluegrass. Photo by Chris Sorenson.

It’s our second Turf Ten of 2014 — Nick’s picks for the top ten three year old horses with at least one North American start on the turf in 2014.

In previous years, the roster of the leading three year-old turf runners and the list of probables for the Virginia Derby have been one and the same. However, with the summer meet at Colonial Downs, along with its Virginia Derby, at least in question, and with the introduction of the $1.25 million Belmont Derby in New York this July, the arena for the top turf three year old performers changes, providing more options for a division whose universe was once anchored in central Virginia.

The removal of the synthetic surface at Keeneland will be missed by many who may be following three year-olds onto the summer turf.  What a swan song in its impact on the Turf Ten.

Next major turf stakes? The $250,000, Grade 2 American Turf at Churchill Downs on the Kentucky Derby undercard.