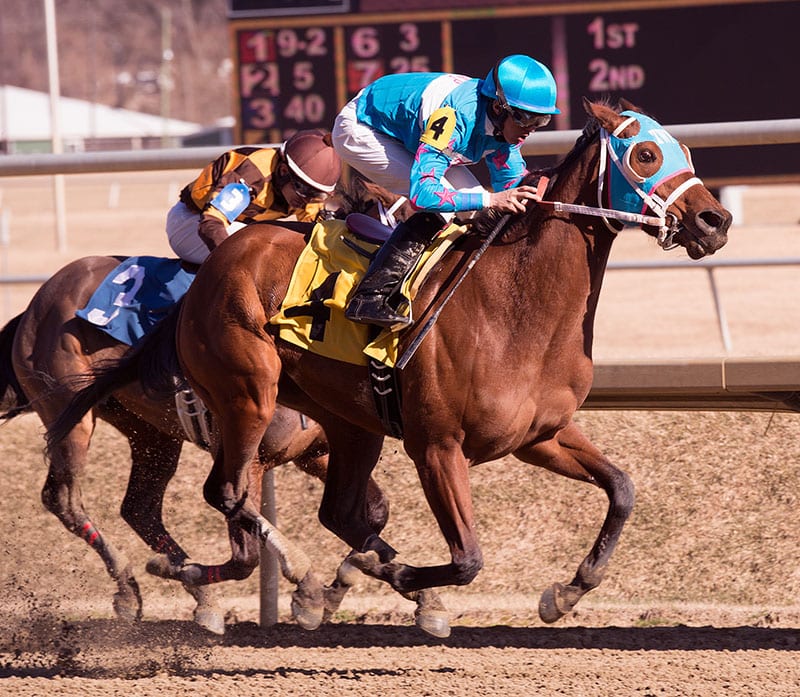 Six Maryland-bred fillies and mares face off in Saturday’s $75,000 Geisha Stakes, a 1-1/16th mile test on the main track at Pimlico Race Course.

Addison Run, a lightly raced daughter of Unbridled Song, is the 9-5 morning line favorite. The 4-year-old has been off the board just one in five lifetime starts for trainer Larry Murray.  She earned her second career victory in her season debut at Laurel Park in February then missed by a neck a month later. Julian Pimentel is her regular rider.

“She really has done nothing wrong. I was disappointed we didn’t win that last race. Julian said she was a little intimidated being on the rail that day but she was really game in defeat,” Murray said. “I am very anxious to run her two turns. She gives me the impression that is what she wants. She is training extremely well for this spot (three bullet works since her last start).”

Murray also entered CC Gold (9-2), who finished second to multiple stakes winner Embarr in the April 5 Dahlia Stakes on the turf. After winning two of her first four races in 2013, the daughter of Touch Gold ran in the Monmouth Oaks (G3) where she clipped heels with another horse and missed the remainder of the year.

“She has always been very forward in her training and acted like a nice horse,” added Murray. “She missed a lot of time after the race at Monmouth. She had a nasty puncture wound in front of the ankle but she is doing great. I was impressed with her effort in the Dahlia. When Embarr went by her she kept trying and thought we might have won it, losing by a head.”

Celtic Katie (3-1) finished second in the Conniver Stakes at Laurel Park last month, her second runner-up finish in a stakes race this year. The daughter of Posse was also second in the Nellie Morse in January. The Chris Grove trainee worked a 5-furlong bullet at the Bowie Training Center Saturday morning. Javier Santiago has the mount.

Damon Dilodovico claimed Brenda’s Way (7-2) for $15,000 and has five in the money finishes in as many starts with the filly. Leading rider Trevor McCarthy will be aboard the daughter of Weigelia.

Steady N Love (5-1) is the only stakes winner in the field. The Gary Capuano trainee captured the Caesar’s Wish at Laurel, then followed with a close second in the Twixt Stakes here three weeks ago. Victor Carrasco continues in the irons.

Charlie Renee (15-1) has a pair of fourth place finishes in stakes races this year, the Wide Country and Twixt. The Any Given Saturday offspring will be ridden by Horacio Karamanos for trainer Ferris Allen.