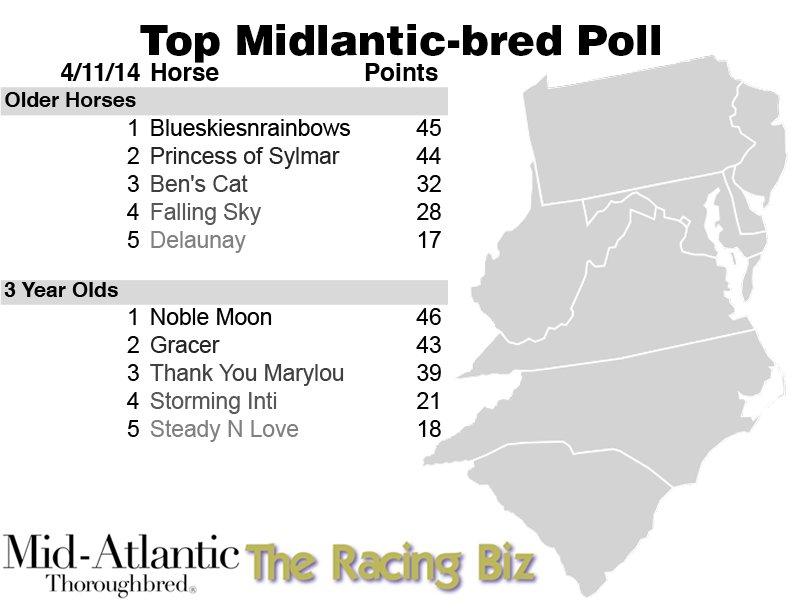 Two horses making their seasonal debuts made instant impacts on the Older Runner poll.  Multiple Grade 1 winner Princess of Sylmar returned to the races at Aqueduct with a clinical victory in the Cat Cay at 3-5 odds.  The Pennsylvania-bred now has nine wins from 12 career starts.

Meanwhile, at Pimlico, ageless Ben’s Cat kicked off his eight year-old season with an easy win in the Mister Diz for Maryland-breds.  It was the 25th win of his career and his fifth in the Mister Diz.

Though both of these popular runners received substantial consideration from poll voters, neither nailed down the top spot.

That honor went instead to Virginia-bred Blueskiesnrainbows, despite his fifth place finish in the Grade 3 Tokyo City Cup on March 29.  Bred by Edward Evans, Blueskiesnrainbows is a son of English Channel out of the Deputy Minister mare Cho Cho San.  Owned by Bad Boy Racing LLC and Whizway Farms, Blueskiesnrainbows has one win — in the Grade 2 San Pasqual — from three starts this year.  Overall, he has a ledger of 25-7-3-3 and earnings north of $670,000 for trainer Jerry Hollendorfer.

The three year-old poll also had one big mover.  Fresh off a third-place effort in the Grade 1 Ashland, Virginia-bred Thank You Marylou jumped from three points in the poll to 39 — and third place.  The daughter of Birdstone, bred by Mr. and Mrs. C.W. McNeely and owned by Ken and Sarah Ramsey, has a career mark of 4-2-1-1 and earnings of over $178,000.  Oddly enough, all four of her starts have come in stakes company.

The top of the sophomore poll, however, remained unchanged with Noble Moon and Gracer running one-two.  Noble Moon, a Virginia-bred son of Malibu Moon out of the Kingmambo mare Mambo Bell, most recently finished sixth at long odds in the Grade 1 Wood Memorial.  Bred by the Estate of Edward P. Evans, he owns a win, in the Grade 2 Jerome, from two starts this season.  He’s trained by Leah Gyarmati for Treadway Racing Stable.

This marked the second semi-monthly edition of the poll.