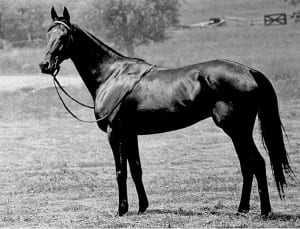 The Maryland Thoroughbred Hall of Fame today announced its class of 2014, adding two new members to the dozen that entered in last year’s inaugural class.

The Hall of Fame, a project spearheaded jointly by the Maryland Horse Breeders Association and the Maryland Racing Media Association, aims to “celebrate the excellence of state-bred Thoroughbred horses.”  The Hall — at this time a virtual museum accessible here — came into being last year with a terrific inaugural class that included national Hall of Famers Challedon, Cigar, Elkridge, Gallorette, Jay Trump, and Safely Kept.

This year’s pair of inductees includes one, Tuscalee, who is also a member of the National Hall of Fame.

Though tiny, Tuscalee set the standard for jump wins, notching 37 of them in a dazzling career.  Ten of those wins came in the 1966 season, in which he earned Steeplechaser of the Year honors.

Bred and campaigned by Alfred H. Smith, Tuscalee was born at Smith’s Blythewood Farm in Upper Marlboro, Md., on April 11, 1960. He was a son of the Maryland stallion Tuscany, who stood at Sam Pistorio’s farm in Ellicott City. His dam, Verna Lee (by British Buddy), was purchased by Smith at a Timonium auction with Tuscalee in utero.

Concern was the first Maryland-bred to win the Breeders’ Cup Classic, scoring narrowly over Tabasco Cat to win the 1994 edition.

Concern, who won seven races and more than $3 million in his career, was known for his strong late kick and his thrilling rallies.

A celebration to recognize this year’s class of inductees will take place on Thursday evening, April 3, at the historic George Peabody Library in Baltimore during the Maryland Horse Breeders Association’s annual awards dinner.

For more: Tuscalee and Concern.