“This horse,” Kid Cruz, had gone from maiden claimer to Triple Crown nominee in a flash.  Now, with a flashy worst-to-first score in the one-and-one-eighth mile Private Terms for three year-olds, he’d opened some eyes — and kickstarted some dreams.

For a slow starter, it was a rather sudden arrival.

“I never thought we would be so far back,” explained jockey Julian Pimentel, who patiently piloted the glamorously bred son of Lemon Drop Kid-Layreebelle, by Tale of the Cat.  “I figured we would be in the middle of the pack, but it took me awhile to get him going.”

Kid Cruz made up 18 1/2 lengths, according to the official chart of the race — 25 by race caller Dave Rodman’s estimation.  A whole lot, either way you slice it, in a race in which he lagged out of the picture altogether before shifting wide on the turn for home and finding a gear his rivals didn’t have.  He won by a widening four lengths, with Joint Custody, who led in the stretch, in second and late-running Matuszak in third.

Arriving late — fashionably late, you might say — has become something of a theme for Kid Cruz. 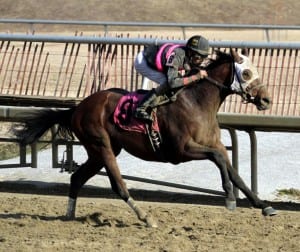 His debut, in which he finished seventh of nine on the Aqueduct grass in November, was dismal.  But Brandt saw something, and so did Rice.

“I just loved this horse when I saw him [in his debut],” Brandt explained.  “I just felt that this horse wasn’t quite ready for his first race, and he really didn’t like the turf.  He didn’t look like he traveled very well.”

For his second start, he shifted to the dirt — and into maiden claiming company — won by six, and shifted barns as Rice claimed the colt for $50,000 for Brandt’s Vina Del Mar Thoroughbreds, along with Black Swan Stable.

And then he fell off the map: no starts for more than two months, until late January.

“After we claimed this horse, we evaluated him and thought he was a little immature mentally and detected some slight sensitivity in his left shin,” explained assistant trainer Sam Randazzo, who saddled the horse on Saturday.  “So we backed up on him a little, freshened him up.”

He returned with a fast-closing second in allowance company.  His breezes improved after that race, Randazzo said.  The horse is bred to run long.  They thought he would like Laurel.  They took a shot.

“This horse – he’s still learning what it’s all about,” said Brandt, joined in the winner’s circle by his partner Rick Boylan — who, he hastened to add, had immediately endorsed claiming the horse — and numerous friends.  “I think the longer he goes, the better he’s going to be.  I feel very fortunate.”

Brandt himself knows something about patience, and about improving over time.  He’s owned horses, on and off, since the 1980s, and with Boylan since 2005.  Perhaps 30 in all, he estimated.  Kid Cruz is the first to win a stake for him.

Then again, Kid Cruz has more going for him than impeccable breeding and a top barn: mom’s prescience.

For, though Brandt chuckled at his mother’s bold predictions for Kid Cruz, he didn’t dismiss them.

“I brought her funeral service program tonight to the races,” he said.  “And I’m like, ‘Mom, we’re going to take you the whole way.’  We’re nominated to a few other stakes in the next few months, and wherever Linda [Rice] wants to go…”

Where that’ll be remains unclear.  Brandt says that, “to me he feels like a Belmont horse,” and Randazzo thinks that Kid Cruz will “run further than what he ran today.” 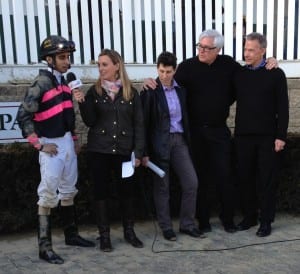 Rider Julian Pimentel chats with Gabby Gaudet after the Private Terms. Assistant trainer Sam Randazzo is to Gaudet’s left, with co-owners Steven Brandt and Rick Boylan next to her. Photo by The Racing Biz.

All that — along with a rumored bid from a major stable for the horse — is in the future.

For now,  Kid Cruz’s winning the Private Terms at Laurel — a track Brandt, from nearby Frederick, said he and his friends visited weekly when he lived there — was enough.  Sharing it with Rick, his friends — and yes, mom — made it even better.