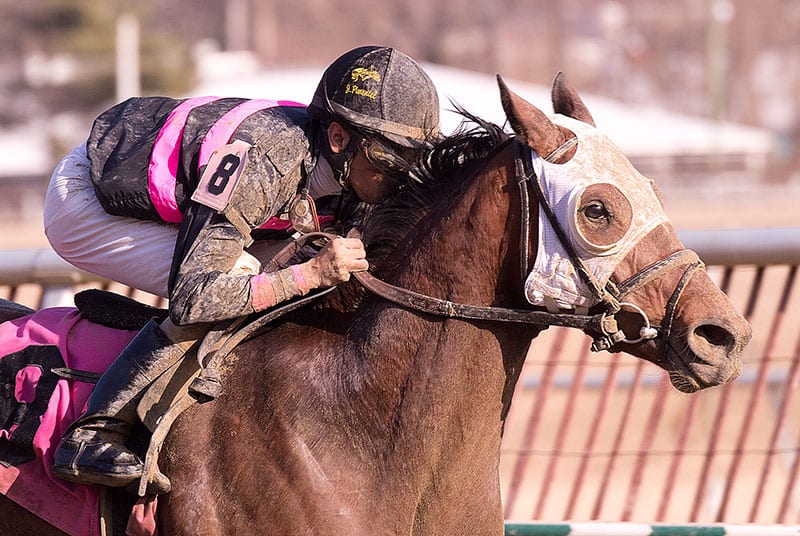 Vina Del Mar Thoroughbreds LLC & Black Swan Stables’s Kid Cruz sustained a rally from the back of the pack, wrested the lead in deep stretch and drew away to win the $100,000 Private Terms Stakes over nine other 3-year-olds this afternoon at Laurel Park.

Julian Pimentel was aboard the Linda Rice trainee, who was claimed in November after breaking his maiden. Today, the son of Lemon Drop Kid covered the 1-1/8th mile distance in 1:54.82 and paid $10.40. Joint Custody loomed a winner but finished second, four lengths back. Matuszak rallied to take third. Baratti, the betting choice, was sixth.

“I never thought we would be so far back. I figured we would be in the middle of the pack but it took me awhile to get him going,” Pimentel said. “He wasn’t going anywhere but around the three-eighths pole he kicked in by himself and got rolling.”

Kid Cruz beat maiden claimers in his second start and was claimed by Rice. He made his season debut in late January with a second place finish around two turns against allowance runners at Aqueduct.

“After we claimed this horse, we evaluated him and thought he was a little immature mentally and detected some slight sensitivity in his left shin so we backed up on him a little, freshened him up,” assistant trainer Sam Randazzo said. “He started training very well for his last race and he ran very well that day to just miss by a half a length. His breezes between that effort and today were getting progressively better. Linda thought that the mile and an eighth here at Laurel and his running style would be suited to the Private Terms. I do think he will run further than what he ran today so we could see him in some longer races in the future.”

Kid Cruz, who is nominated to the Triple Crown series, improved to two-for-four lifetime with earnings of $101,375.

TRAINING TITLE GOING DOWN TO THE WIRE

With three weeks remaining in the Laurel Park winter meeting, the battle for top trainer looks as if it will go down to the wire.

Hugh McMahon saddled Royal Sparkle ($24) to victory in today’s seventh race to move into sole possession of first place with 14 victories, one more than Kieron Magee and Juan Vazquez. Claudio Gonzalez (11) and Mike Trombetta (10) are within striking distance.

Trevor McCarthy is poised to win his first career riding title. The 19-year-old apprentice has 40 victories, 12 more than Victor Carrasco. McCarthy has 13 multiple-win days during the meet, which includes this afternoon when he rode two winners.