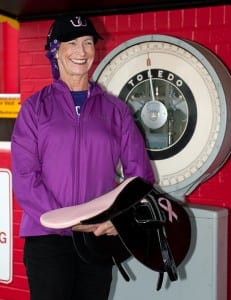 Female apprentice jockey Barbara Jo Rubin made her Maryland debut a successful one as she registered a win and a second — aboard a 30-1 shot — on opening day at Pimlico.  The following day she had two winners at Waterford Park, now Mountaineer, in West Virginia.  Rubin thus became the first woman rider to win a parimutuel race in Maryland.

Rubin had been set to unveil her riding talents on January 15, 1969 at Tropical Park but male riders there threatened to boycott, and someone threw brick through a window in the trailer set up to be used as her dressing room.  Under pressure from track management, trainer Bryan Webb took her off her scheduled mount.  Nonetheless, Rubin and Webb would not be deterred.

Soon after the Tropical Park experience Rubin traveled to the Bahamas where she won a race on January 29, 1969, and her appearance did not draw such ire from her male counterparts.   Rubin won her first race in the United States at Charles Town on February 22, 1969 after Webb convinced racetrack owner Irv Kovens to permit her to ride.  That made her the first woman to win a parimutuel race at a recognized track in the United States.

On March 15, 1969 Rubin rode 13 -1 longshot Bravy Galaxy, running under trainer Buddy Jacobson’s name, to victory in her first mount in Aqueduct — the first time a woman had ridden in a race in New York.  Rubin won aboard her second mount in New York the following day.

Rubin’s appearance in the Big Apple was big news; she was interviewed by Walter Cronkite and Joe Garagiola for the major television networks and  appeared on the “The Ed Sullivan Show” and “To Tell The Truth.”

Don Fair, supervisor of field operations for the Morning Telegraph and the Daily Racing Form commented that “a woman’s place is in the clubhouse.”  But Francis Dunne, steward of the of New York State Racing Commission correctly stated,  “This could be the dawning of a new day.”

Rubin was impressive out of the gate, winning with 11 of her first 22 mounts.  During her career she braved insults from fans and fellow riders, with her male counterparts often cutting her off during races.  At Waterford Park riders once slashed her with their whips.

Barbara Jo Rubin rode less than one year due to injuries sustained in several spills.   She has returned to Pimlico to compete in the Lady Legends race on Black-Eyed Susan Day.  She won 22 of 89 starts during her one season of racing.

Diane Crump was the first female to compete at a recognized American racing venue, debuting on February 7, 1969 at Hialeah.

For Email Marketing you can trust.
[/boxify]