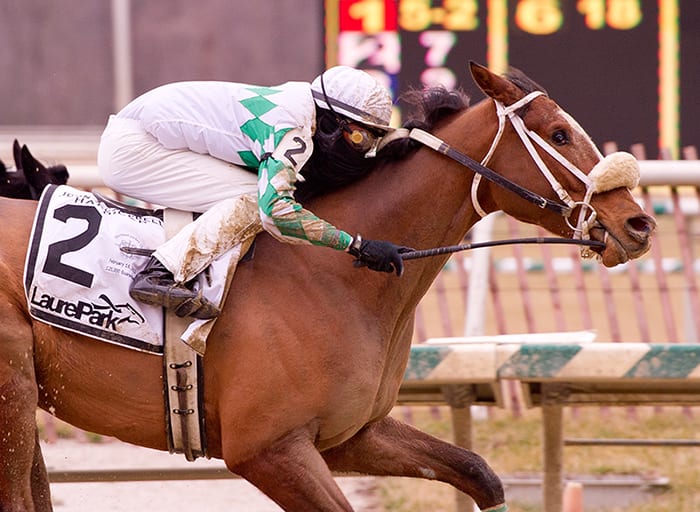 Trainer Linda Gaudet has a 40 percent chance of winning the $100,000 John B. Campbell Handicap, the co-feature Saturday afternoon at Laurel Park. The 1 1/8 mile test for older runners is race six on the card headlined by the $300,000 Barbara Fritchie Handicap (G2).

Managed Account, who finished first or second in seven of 10 starts since being claimed by Jamie Ness a year ago, is the 3-5 morning line favorite. The son of Malibu Moon won a pair of stakes races last fall and ran a career-best 94 Beyer speed figure in a third place finish in the Native Dancer Stakes here January 25.

Wild Louis has hit the board in 10-of-14 starts since being claimed by Gaudet in December 2012, including a runner-up finish in the Maryland Million Classic and a solid third in the Jennings Handicap behind Eighttofasttocatch last fall.

“He is a very consistent horse who is easy to train,” Gaudet said. “He is a nice horse. He eats, he trains and is just good to be around. If we had 50 of him, we would be really happy.”

Concealed Identity won six times in his first 14 races, including three stakes, but the son of Smarty Jones has visited the winners’ circle just once in his last 20 starts, a victory in the 2013 Campbell at odds of 7-1.

“We were looking for an easier spot for him but this race didn’t come up tough,” added Gaudet. “He likes the distance and has been training great since his last start (January 25). He has two bullet works and he couldn’t be coming into the race any better.”

Two horses looking for their first stakes wins, Mercenary (6-1) and Behemoth (6-1), round out the field.