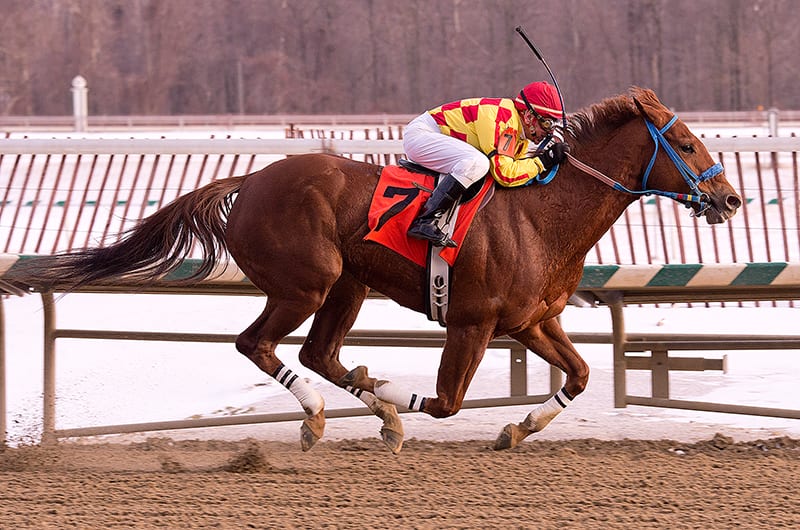 The storied $300,000 Barbara Fritchie Handicap (G2) kicks off holiday racing this weekend at Laurel Park. The 60th edition of the Fritchie has attracted 10 fillies and mares, who will race seven-furlongs.

Maryland Jockey Club handicapper Keith Feustle has tabbed La Verdad as the 5-2 morning line favorite. After finishing off the board in her debut, La Verdad has reeled off five straight front-running victories, four against optional claiming company at the New York tracks. Jose Ortiz has been aboard the Yes It’s True filly in all her starts for trainer Linda Rice.

“We are ready to try stakes company and the timing is right,” Rice said. “She is a big filly with a lot of natural speed. We were hoping to rate her off the pace last time but it didn’t work out. We’ll see how she does with the added distance.”

An early resume in claiming races made Centrique (3-1) eligible for the Claiming Crown Glass Slipper at Gulfsteam Park, a race she won as the odds-on favorite. She followed that effort with a second win at Gulfstream, this time over allowance company. The Marty Wolfson mare has finished in the money in 20-of-30 lifetime starts. Edgard Zayas has the riding assignment.

Trainer Michael Hushion has won two of the previous six Barbara Fritchie Handicaps, winning with Golden Dawn (2008) and Harissa (2011). The Belmont Park-based conditioner is sending last year’s runner-up My Wandy’s Girl (4-1) in search of another Grade 2 score. The daughter of Flower Alley, a Puerto Rican import, won her North American debut at Aqueduct in the 2012 Pentelis Stakes then she finished in the money in three graded races: Gazelle (G1), Barbara Fritchie (G2) and Ruffian (G2). After a six-month absence, she returned in December to post a fifth place finish in the Garland of Roses. Rajiv Maragh will ride for the first time.

Winning Image (9-2) captured the What A Summer Stakes at Laurel in her most recent try. The Southern Image mare has eight stakes wins on her resume for trainer Michael Oro with earnings of nearly $600,000. Tony Black, who ranks 23rd on the all-time win list with 5,205 winners, said the 7-year-old is as quick as any horse he has ever been aboard.

“It was exciting to hear Tony say that. He actually was very impressed with her when he worked her one morning and said he had not been on anything as good as her since 1989,” Aro said. “She is one of a kind to me and is appropriately named. She is determined and likes to win.”

John Servis will ship Villette (6-1) from Parx Racing, where she’s won four of her last five starts. Her best effort was a victory in the Foxy JG Stakes last April. The Petionville mare returned from a nine-month absence to win against optional claiming company on January 14. Stewart Elliott has the mount.

“She has been a really nice mare since day one,” Servis said. “She was ready to run but we got hit by the quarantine which set us back. When we finally got a chance to run her last month she was on go. She is going to be close to the pace but she does not have to be on the lead. She is a nice filly and she’ll give it all she’s got.”

Kiaran McLaughlin shipped Baragah (12-1) to Laurel from Belmont Park for her past two starts, resulting in an allowance victory in December and a fourth place finish behind Winning Image in the What A Summer Stakes on January 25 despite a troubled trip. Alex Cintron retains the mount.

“We were just unlucky in that last race. The first two finishers are really nice. We were probably third best that day but ran fourth,” said McLaughlin’s longtime assistant Artie Magnuson. “She’s improved quite a bit but we are stepping up in company. We’ll be sitting off the pace and hope to make a nice run.”

Larry Murray entered both More Than a Cruise (15-1) and Access to Charlie (20-1) but indicated he will likely be running the latter in her final career start. The Indian Charlie mare has finished on the board in 13-of-22 starts for $251,220. She earned stakes victories in the 2011 Twixt Stakes and 2013 Geisha Stakes, both at Laurel. Julian Pimentel will ride.

“She is going to the breeding shed after this start so I am hoping to go out with a bang,” Murray said. “She has been a very productive runner. If she could be third in the Fritchie and get some graded black-type that would be perfect. She is a cut below the top horses but she has been very sound and tries every time. She has run some big races. Hopefully she can run by a few down the lane and hit the board.”

Murray said More Than a Cruise would be pointed towards the Conniver Stakes at Laurel on March 22, a race where she finished second to Bold Affair a year ago.

Flattering Bea (20-1) won the Ms. Shenandoah Stakes at Charles Town right out of the maiden ranks and has finished first or second in seven of her last 10 starts. Her most impressive effort was a surprising, near-miss second in the Miss Preakness Stakes last spring at odds of 52-1. Crystal Pickett trains the Flatter homebred. Sheldon Russell will be aboard for the first time.

“She has been the nicest filly to train,” Pickett said. “Nothing seems to bother her. She has a great attitude. She runs her guts out every time so the key is giving her time off between races. Sheldon came to work her the last two times and she loves him. I was looking for a patient rider because she loves to have speed to run at and Sheldon fit the bill. This is certainly a step up in class but she belongs.”

Sunlit City (30-1) is 4-of-12 lifetime but finished ninth in her only stakes try, the Safely Kept Stakes.

The Campbell drew a field of seven older runners, including Bold Curlin. The Mike Trombetta trainee was an impressive winner of the Native Dancer Stakes here last month.

(Featured image, of Winning Image in the What a Summer, courtesy of the Maryland Jockey Club.)