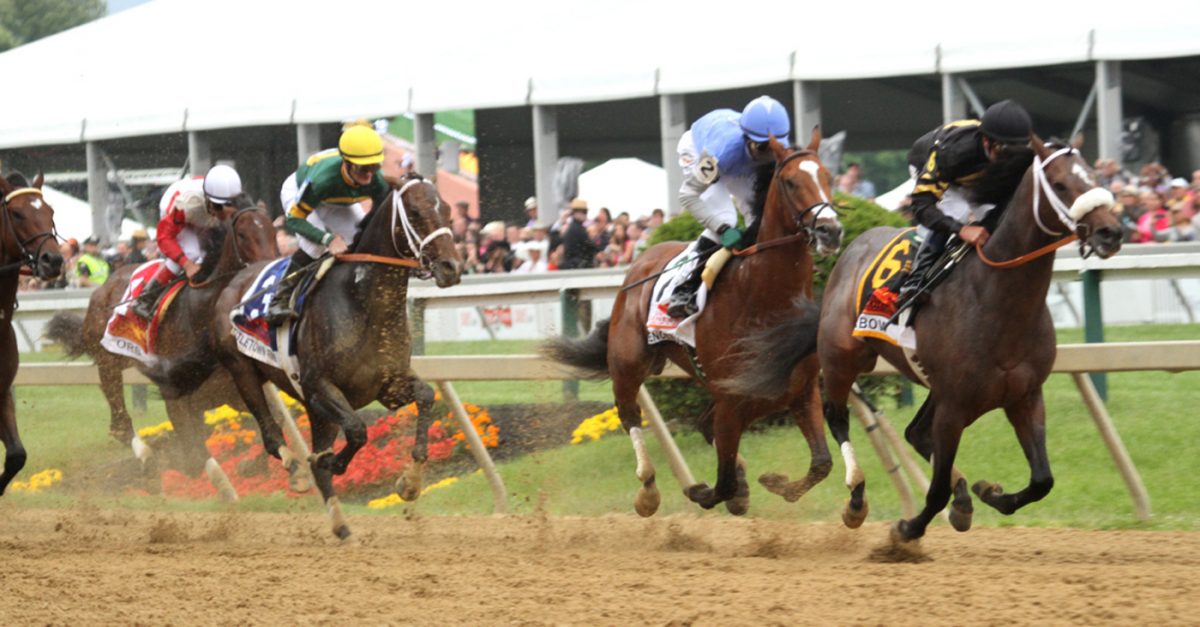 Extrasexyhippzster was much the best in the Miracle Wood for trainer Mike Trombetta. Photo by Laurie Asseo.

And certainly Extrasexyhippzster’s connections, at this point, deserve the chance to dream.  The homebred son of Stroll has, after a fourth place finish in the Marylander, won back-to-back stakes, taking the six furlong Don Rickles at Aqueduct and the one mile Miracle Wood at Laurel (here).  What’s more, there aren’t many on the list of early nominees who’ve run a higher Beyer figure than his career best of 93.

The list of nominees to the Derby, Preakness, and Belmont also includes many with even better credentials, horses like the unbeaten Eclipse champ Shared Belief, Breeders’ Cup Juvenile runner-up Havana, and Cairo Prince, easy winner of Gulfstream’s Holy Bull.

Also among the nominees is a sizable the group of unraced horses, the Harbor Fogs and Guggenheims and Grizzly Songs of the group.  The likelihood of a horse — unraced by February of his sophomore season — winning a Triple Crown race is, of course, vanishingly small.  And yet, that they have not yet run is, in its way, its own argument for nominating them; they could be good enough.  They have not yet proven otherwise.  In racing, that can be reason enough.

Which gets us to yet a third group of horses, perhaps the most interesting of all: those who have raced and, well, to date anyway, aren’t very good.

What do we make of the nomination of High Bidder?  He’s winless in four starts and was most recently sixth in a maiden claimer at Gulfstream, at odds of 57-1.

How about Aniar?  The best of his two results to date was a seventh-place finish in a maiden special weight event at Churchill Downs.

Or Canadian Winner who, to date, isn’t?  He’s been 10th, fifth, and fifth in three career starts.

Or Russian Humor and Decisive Edge?  They finished right behind each other — in ninth and tenth — in their last start, in maiden company.

All bidding to be the next Guadalcanal, and who can forget him?

Pretty much everyone, actually.  He was a five-race maiden when he entered the starting gate for the 2008 Belmont.  Sent off at 25-1, he was never involved and finished seventh, which, for what it’s worth, was better than that day’s favorite, Big Brown, managed.  Speaking of forgettable, that day’s winner was Da’Tara, who’d won only a maiden race prior and never won again.

[pullquote]There are more horses nominated to the Triple Crown this year than there were in 1989 — a year in which the crop of eligible horses was twice as large as it is today.[/pullquote]

It’s a curious lot, indeed.  Some of the apparent no-hopers belong to big outfits that probably nominate most of their sophomores.  In other cases, a semi-rational calculation takes place: young horses can improve suddenly, and if one of yours does, $600 today is a lot cheaper than $6,000, the fee at the next deadline, or as much as $200,000 to supplement a horse into the series.  And, with $5 million in purse money in the three races, why not take a stab?

Of course, there will always be people who — for reasons of pride or prestige or whimsy, or because they’re terrible handicappers — drop a name on the list just to see it there.  At least they get to see the little crown next to the horse’s name in the program.

But there’s more to it than that.  The 413 early nominations represent — without including any late nominations — 1.6 percent of the Thoroughbreds born in 2011.  That’s the highest percentage of the foal crop nominated to the series since the inception of the current system, in 1986, and it’s no outlier, merely the continuation of an upwards trend.

Put a different way, there are more horses nominated this year than there were in 1989 — a year in which the crop of eligible horses was twice as large as it is today.

There are many reasons for this, possibly as many as there are nominees: the increasing money in the Triple Crown purses, the growing importance those races and the concomitant decline in prestige of virtually all other races outside of the Breeders’ Cup, the fact that $600 today isn’t quite as expensive as $600 was in 1986.

However you slice it, there’s every reason to think these trends will continue, for which Triple Crown Productions no doubt thanks you.

(Featured image, of Oxbow in the 2013 Preakness, by Laurie Asseo.)