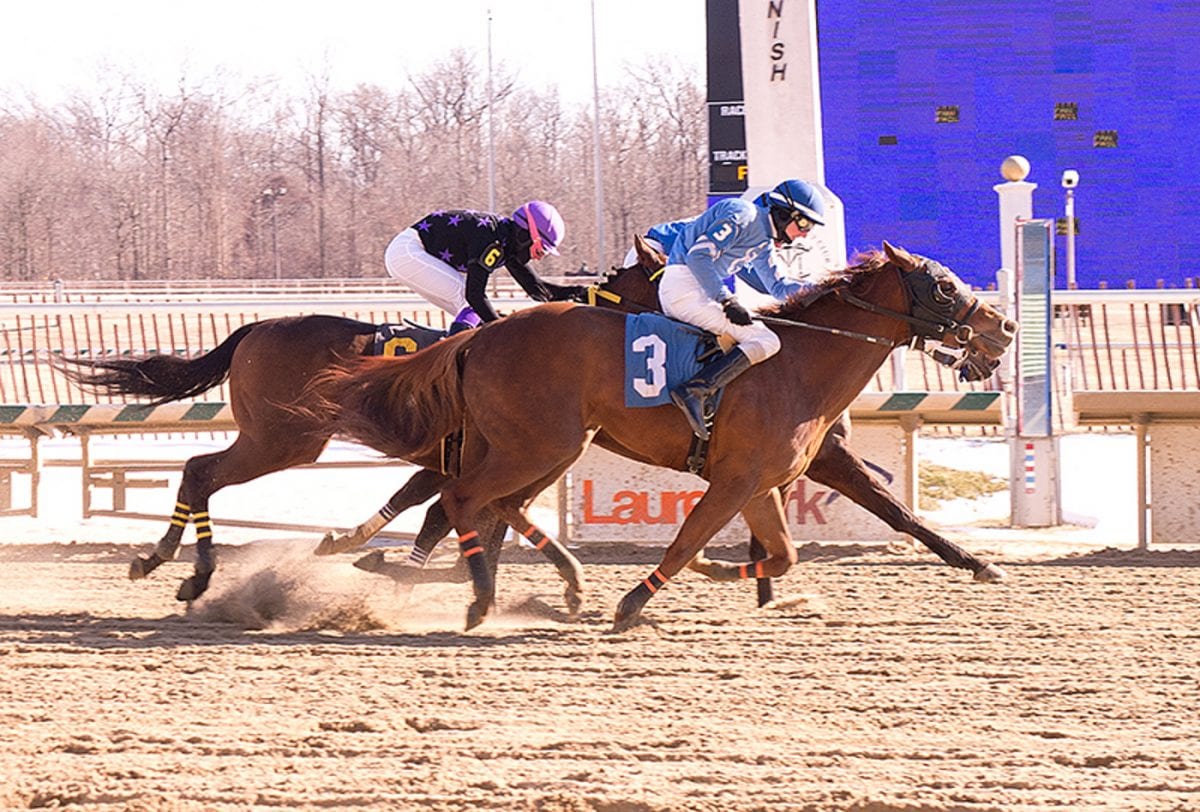 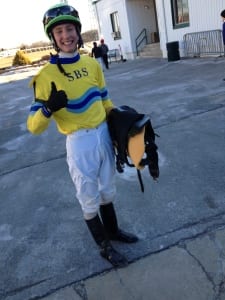 Trevor McCarthy is all smiles after a three-win day at Laurel Park.

Chances are, Trevor McCarthy was sore this morning.

“Put it this way,” one observer said of McCarthy’s no-feet-in-the-irons victory yesterday at Laurel Park.  “He probably feels like a gymnast who fell on top of the balance beam 40 times in a row.”

Chi Chi’s Pride, McCarthy’s mount in a $5,000 claiming race, stumbled badly leaving the gate.  “He broke a little awkward,” the five-pound apprentice explained, “and I lost my balance and ended up losing my left iron first and then the right.”

Happens all the time, riders losing their irons, but try as he might, McCarthy couldn’t find them again.  For the first half of the race, as McCarthy tried in vain to regain them, he was little more than baggage on the horse’s back.  “Having no control at all,” track announcer Dave Rodman described it.

That’s not what McCarthy did, however.

What he did, well, no one I spoke with at the track had seen before: not Ferris Allen, who’s been training for nearly 40 years, not Keith Feustle or Bill Brasaemle, who prepare the official race charts at Laurel for Equibase, not a handful of owners I spoke with.

“I just couldn’t get ’em back in,” McCarthy said of his feet and the irons.  “So I just said, ‘Forget about it, just worry about the race and try to get him home to win.'”

Rounding the turn, Chi Chi’s Pride, who’d been dawdling in seventh, began to close into what had been a fast early pace.  McCarthy switched from trying to find his irons to trying to win a race.

“I had pretty good balance,” he said later.  “Just tried to keep my legs in as tight as possible, stay balanced.  I tried to stay as balanced as I could and ride the horse at the same time.”

In the course of the race, McCarthy steered the horse off the inside to pass a rival, then between horses, and then farther outside again to win in a three-horse photo finish over Carnbrea’sdestiny and Pelican Cove.  He managed all that while urging the horse strongly enough that the chart described his efforts as “enthusiastic riding.” 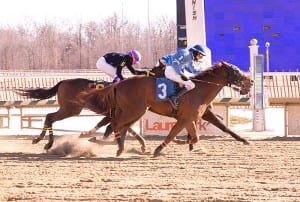 Chi Chi’s Pride beat Carnbrea’sdestiny by a nose, with Pelican Cove a half-length farther back.

“It was pretty wild,” said McCarthy.  “Probably the wildest thing I’ve ever experienced.”

Asked how he managed it, he shrugged.  “Just hang on, I guess,” he answered.

McCarthy went on to add two more wins on the day, giving him seven in a remarkable two-day run.  “It’s been a pretty phenomenal two days,” the rider said.  “Today, to start out like that, losing the irons and winning, is pretty cool.”

“Luck has a big deal with it,” he said.  “You know, luck and a lot of good horses I’m riding, a lot of good trainers and good owners.”  Not to mention — which he did — the grooms and gallop guys.

He apparently was disinclined to tinker with his good luck, either.  He never — not even after the race — found the irons.  He returned to the winner’s circle aboard Chi Chi’s Pride, long legs dangling off the side of the horse.

Though he did make one change, come to think of it.  In his two wins later on the card, he went straight to the lead and didn’t look back.