No irons, no problem for Trevor McCarthy 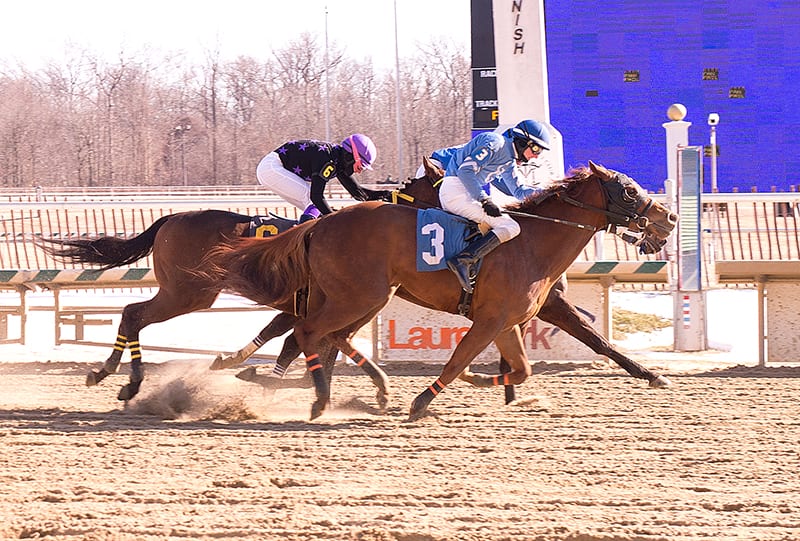 Trevor McCarthy has ridden 171 winners in his young career but none more exciting than scoring with Chi Chi’s Pride in Thursday’s third race at Laurel Park.

At the break, the 4-year-old gelding bumped with Carnbrea’sdestiny causing McCarthy to lose his irons forcing the jockey to ride the entire race with his feet out of the stirrups. At the top of the stretch, Chi’s Chi Pride was fifth but rallied between rivals and got up at the wire to beat Carnbrea’sdestiny by a nose. The John Salzman, Jr. trainee paid $10.80.

“It was the wildest experience I have ever had in a race,” McCarthy said. “We came out of the gate and he leaned to the right and I went with him. When I leaned back left I lost my left stirrup and then lost the right while trying to recover. I did try to get them back in at the half-mile pole but it didn’t happen. I gave him a tap on the shoulder at the top of the stretch and he came running. It was fortunate we were able to get the win.”

Last April at Pimlico Race Course, jockey Xavier Perez made national news when he lost his irons aboard Spicer Cub. The horse then bolted around the parked starting gate along the outside rail and still nearly won, losing by a nose. The replay has been viewed nearly 140,000 times on YouTube.

“The only other time I have seen something like it was with Xavier last year,” added McCarthy. “My dad (retired rider Mike McCarthy who won 2,907 races from 17,180 mounts in 21 years) texted me and said ‘you are wild’. I guess this never happened to him.”

One day after matching his career-high with four wins, the 19-year-old visited the winners’ circle three times this afternoon, also finishing first with Petie’s Boy ($5-race 4) and Grace Is a Beauty ($6.60-race 7). He leads the Laurel winter jockey standings with 18 victories.

Here is a replay of the race: http://youtu.be/IKYz-li3Qik