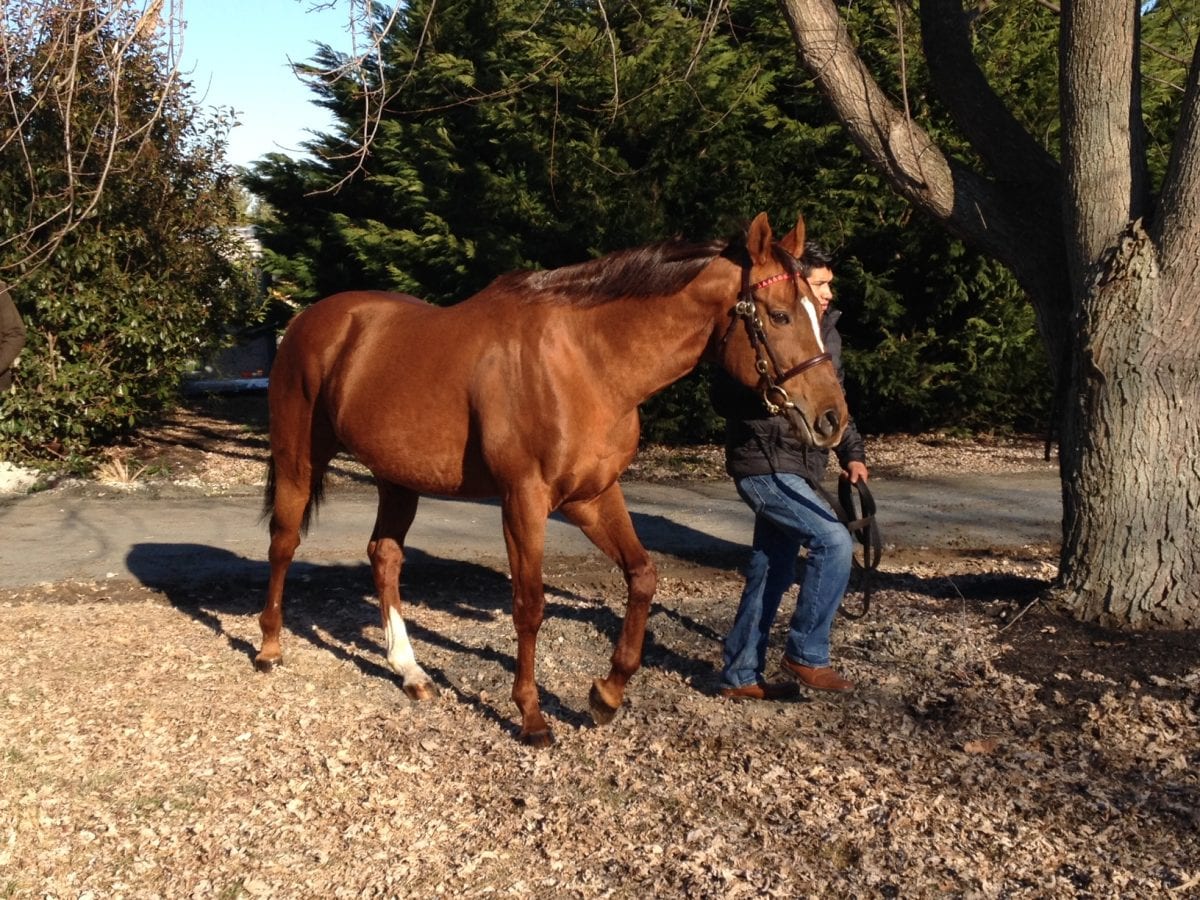 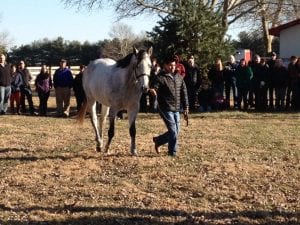 New sire Despite the Odds, a son of Speightstown, struts his stuff at the Heritage Stallions open house. Photo The Racing Biz.

It’s almost February, and that means that the breeding season is fast approaching. This year, there are several new stallions in the Mid-Atlantic region for breeders to consider, and we’ll look at them in a two-part series.

Maryland’s newest operation, Heritage Stallions in Chesapeake City, welcomes two new stallions to stud – Despite The Odds and Hunters Bay – as well as new stallions to the region Showing Up, Giacomo and Plan.  They’ll join Street Magician, whose first foals will be two year-olds this year.  Their pedigrees and race records should appeal to a wide variety of breeders.

Giacomo won the Kentucky Derby, Showing Up won the Hollywood Derby, and Hunters Bay was a champion in Canada. Their sires include Ghostzapper (Hunters Bay), Speightstown (Despite The Odds), Storm Cat (Plan), Holy Bull (Giacomo) and Strategic Mission (Showing Up). Farm manager Louis Merryman is very enthusiastic about the group.

George Rowand started Bonner Farm in Virginia with his family in 1980.  From a mare than won just $450, and using modest stallions, he bred and managed grade 1 winners Miss Josh and Royal Mountain Inn as well as graded stakes winners Highland Springs and Highland Crystal  He is the author of “Diary of a Dream: My Journey in Thoroughbred Racing.”

“Despite The Odds is a half-brother to a champion in Canada,” Merryman said. “He was a really talented horse that had some hard luck. I think that people who are breeding to race are going to like this horse.”

Despite The Odds is a gray son of champion sprinter Speightstown and is out of Lady Aloma, a stakes-winning daughter of Breeders’ Cup Mile winner Cozzene. She is the dam of Chopinina, a champion turf mare in Canada, as well as another stakes winner. Speightstown has been very successful at stud. He finished second on the general sires list in 2013 and sired 10 graded-stakes winners, including four grade 1 winners last year.

Despite The Odds won the grade 3 Hill Prince Stakes, contested over a mile on a sloppy track, and finished second in the Jersey Derby and the Long Branch Stakes while amassing earnings of $261,429. He is standing 2014 for a $1,500 stud fee. His race record indicates that he has sprinter’s speed, but he could carry it at least a mile and seemed effective in the slop.

“Hunters Bay,” Merryman continued, “I love him. He’s quite possibly the most attractive horse I’ve ever seen come off the track.”

Hunters Bay was the champion older horse in Canada, and he is by champion Ghostzapper and out of Smok’n Frolic, who won over $1.5 million and is by Smoke Glacken. The 7-year-old enters stud with a race record that includes $611,091 in earnings after victories on dirt and polytrack and a second to reigning Horse of the Year Wise Dan in the Woodbine Mile on grass. He stands for $6,000. Winning at distances from 7 to 10 furlongs, he still seemed most effective at middle distances. Mares that match that profile might be most suitable for Hunters Bay, and mares that have some Hail To Reason blood in their pedigrees could work well with Hunters Bay. 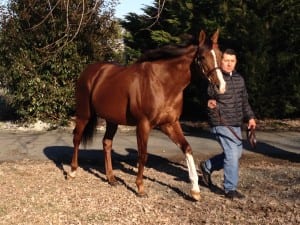 Now let’s take a look at the stallions that are moving to Heritage. The headliner in terms of race record has to be Giacomo. The Kentucky Derby winner in 2005, Giacomo has a lovely 14 percent stakes horses from starters. He sired seven stakes winners in 2013, and his foals won $2.1 million. As one would expect from a Derby winner, Giacomo has stamina in his pedigree, but his babies have shown surprising versatility, winning from six furlongs through the middle distances to longer, which certainly opens up the possibilities for breeders. Heritage’s pedigree analysis shows that he has done very well with mares from the Caro bloodline. Giacomo is standing for $5,000.

Showing Up won $1.6 million in his racing career, taking the grade 1 Secretariat Stakes and the Hollywood Derby as well as the Colonial Turf Cup at Colonial Downs. He set track records at Colonial and at Gulfstream Park, and in spite of his distance ability, his foals have won going short and middle distances. Research shows that he matches well with mares who have blood from the Northern Dancer line. He stands for $3,000.

“Showing Up was bred by the Jacksons – who bred Barbaro – and he won on all surfaces, and his foals are winning on all surfaces … dirt, turf and synthetic … so that should have appeal to breeders around here,” Merryman related.

Breeders looking for impressive pedigrees with some stamina might want to take a look at Plan, a son of the spectacular Storm Cat who is out of $3.5 million earner Spain, the Breeders’ Cup Distaff winner. Spain is by Kentucky Derby winner Thunder Gulch. Plan won $192,000.

“Plan has a great pedigree, and he’s a really interesting horse,” Merryman said. “I handled a lot of Storm Cats when I worked for Coolmore, and this horse is an atypical Storm Cat. Number one, he’s about as level-headed as a horse could be, and number two, a lot of Storm Cats tend to be on the short side, like a sprinter, and this horse is still muscled, but he’s taller and longer and extremely correct.”

Plan will stand 2014 for $4,000. He broke his maiden in Ireland at 7 furlongs before emigrating to America where he ran second in the grade 1 Secretariat Stakes at 10 furlongs. He has some solid stamina in his pedigree, and other Storm Cat stallion have done well with Nijinsky- and Alydar-line mares.

(Featured image, of Showing Up, by The Racing Biz.)