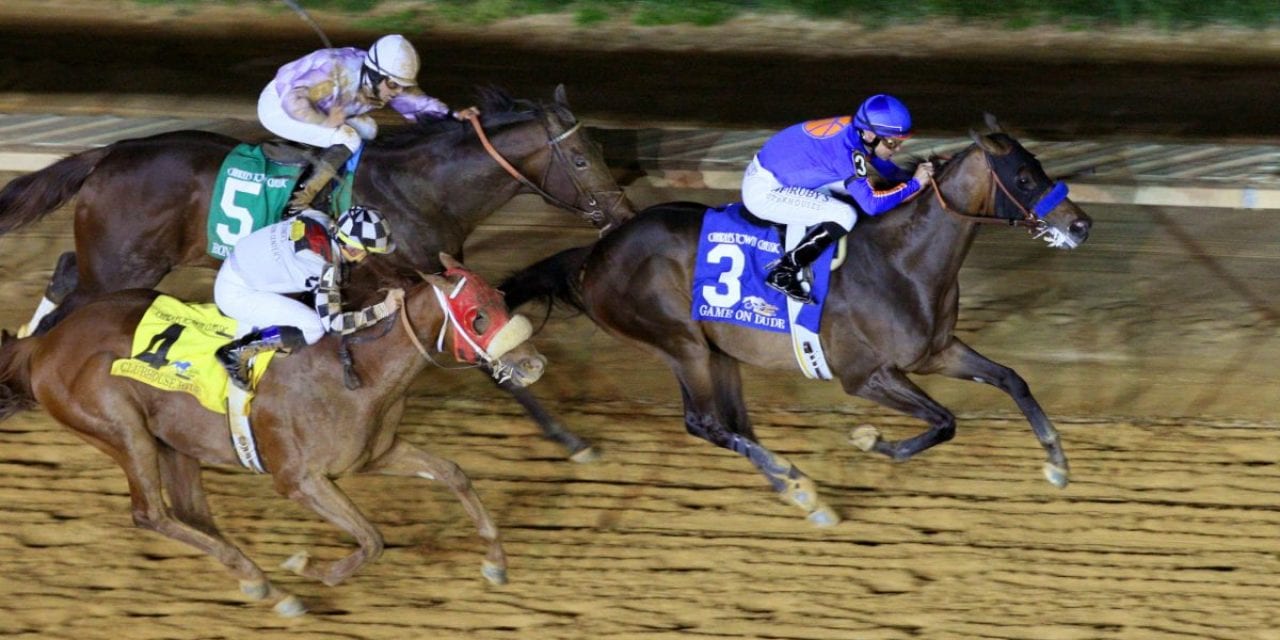 Two horses that won at Charles Town this year — and two others that won at Charles Town and Penn National in prior years — are Eclipse Award finalists, following an announcement made by the National Thoroughbred Racing Association, Daily Racing Form and the National Turf Writers and Broadcasters this morning.  Charles Town Classic winner Game on Dude and Sugar Maple presented by CANTER Mid-Atlantic victor Dance to Bristol are joined by Groupie Doll and Princess of Sylmar, each of whom won in the region last year, in seeking year-end hardware.

2013 saw Game on Dude, a finalist for champion older horse, took his second crack in the Grade 2, $1,500,000 Charles Town Classic against a field that included multiple Grade 1 winner Ron the Greek, Santa Anita Handicap runner-up Clubhouse Ride and the race’s defending champion, Caixa Eletronica.  The Bob Baffert trained gelding came into the race off a pair of blowout victories in the San Antonio and Santa Anita Handicap, races he both won for the second time.

Unlike in 2011 where he finished behind Duke of Mischief – but ahead of fellow 2011 champion older male nominees Acclamation and Tizway – Game on Dude was able to take down the top prize in the Charles Town Classic, besting Clubhouse Ride and Ron the Greek by a half-length.  The $1,000,000 payday was the biggest of the now seven-year-old’s career which has seen him bank more than $5.7 million in earnings. In addition to the Charles Town Classic, Game on Dude swept the three biggest older horse races in California in 2013 when he tacked on a victory in the Grade 1 Hollywood Gold Cup and 8 ½ length win in the Grade 1 Pacific Classic to his Big ‘Cap score.

Game on Dude is a finalist for the Eclipse Award with 2012 Horse of the Year Wise Dan and 2013 Breeders’ Cup Classic winner Mucho Macho Man.

Dance to Bristol, a finalist for champion female sprinter, gave trainer Ollie Figgins, III the first ever win by a Charles Town based conditioner in a Grade 1 this past year when she took the Ballerina at Saratoga as part of a 10 race campaign that produced 3 graded stakes wins.  While her biggest stakes win came in upstate New York, her first stakes win of 2013 came in the $200,000 Sugar Maple on the Charles Town Classic undercard. Going off as the second choice in the 7 furlong Sugar Maple, Dance to Bristol waltzed to a 9 length win, which would be the third of 7 consecutive victories she would run up between February and August.

After her winning streak was ended by Cluster of Stars in the Grade 2 Gallant Bloom, Dance to Bristol ended her season and career with a sixth place finish in the Breeders’ Cup Filly & Mare Sprint.

The winner of the Breeders’ Cup Filly & Mare Sprint – and herself a finalist for the champion female sprinter crown – Groupie Doll will be in search of her second Eclipse Award, having taken honors in the same category last year.  Trained by Buff Bradley, Groupie Doll made an appearance at Charles Town in 2011 when she finished a fast closing second to Strike the Moon in the now graded Charles Town Oaks.  After commanding $3.1 million in the sales ring following her second Breeders’ Cup victory, Groupie Doll closed out 2013 with a fourth place finish against males in the Grade 1 Cigar Mile at Aqueduct.

The third finalist in the female sprint division, Mizdirection, capped her career with a second consecutive win in the Breeders’ Cup Turf Sprint.

Champion three-year-old filly finalist Princess of Sylmar didn’t run in the region in 2013 but got an earlier start at home, kicking off her career at Hollywood Casino at Penn National Racecourse back in 2012.  Owned by King of Prussia Stable and trained by Todd Pletcher, the Pennsylvania-bred Princess of Sylmar made her career debut in a maiden special weight at Penn National on October 12, 2012.  The fourth place finish in her first lifetime start was followed up with a 19-length maiden breaking score a month later.

After leaving Penn National, Princess of Sylmar would race one more time as a two-year-old before embarking on a three-year-old campaign that included 6 wins in 8 starts, with 4 of those wins coming in Grade 1 events.  After upsetting the Kentucky Oaks field at odds of 38.80-to-1, the daughter of Tapit took the Coaching Club American Oaks and Alabama at Saratoga before defeating multiple Eclipse Award winner Royal Delta in the Beldame.

Following the Beldame, King of Prussia Stable’s principle owner Ed Stanco decided to pay the healthy sum of $100,000 to supplement his star to the Breeders’ Cup Distaff, a race where Princess of Sylmar didn’t fire her best shot and could do better than a sixth place finish.  The top two finishers in the Distaff, Beholder and Close Hatches, join Princess of Sylmar as finalists for champion three-year-old filly.

Winners in the 17 different equine and human categories will be announced at the 43rd annual Eclipse Awards dinner and ceremony, presented by Daily Racing Form, Breeders’ Cup and The Stronach Group on Saturday evening, January 18 at Gulfstream Park.