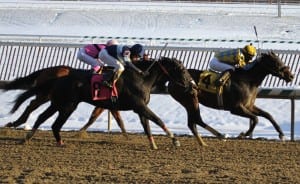 Broad Rule splits Service for Ten, outside, and Warrioroftheroses, inside, to win the Fire Plug Stakes. Photo by Laurie Asseo.

When the field entered the paddock for the $100,000 Fire Plug Stakes on Saturday afternoon at Laurel Park, there were a number of very familiar faces in the stalls alongside their horses. But listed in the program was the name of a trainer that even hardcore Maryland Thoroughbred racing fans might not have recognized.

After more than two decades of working as an assistant trainer to Damon Dilodovico at the Bowie Training Center, Emanuel J. “Mike” Geralis walked into the stall alongside Service For Ten and then gave jockey Sheldon Russell a leg up on the five-year-old Service Stripe gelding. It was hardly the first time Geralis had done either, but in one respect, it was considerably different from any other day at the track for him: for the first time, it was his name in the program as a horse’s trainer.

“I have to admit, when the horses were all in the paddock I was a little nervous,” said Geralis, a graduate of Crossland High School in Temple Hills, MD, and longtime friend of Dilodivico, who graduated from nearby Friendly High School.  “I think I had a few butterflies. But once the horses headed onto the track I felt fine.”

Service For Ten is one of three horses that Geralis trains at Laurel for owner Mark Lapidus, who typically spends much of the winter in Florida but made the trip north to see his gelding run.  Geralis will also train Bowman’s Boy and Always A Contest for Lapidus, while Dilodovico still has eight horses in his Bowie barn, including the ageless veteran Immortal Eyes, a winner of 18 of 48 career outings and hero of September’s $350,000 Frank J. DeFrancis Memorial Dash.

When the field turned for home in the Fire Plug, Warrioroftheroses, a versatile sort that Dilodovico trains, and Service For Ten looked for an instant as if they were going to finish one-two. But in the final furlong, Broad Rule, last year’s upset winner of the Fire Plug, split horses and surged through to defend his title.  Service For Ten finished a game second, and Warrioroftheroses was a solid third.

Dilodovico and Geralis practically grew up together in southern Prince George’s County, outside of Washington, DC.  Their grandmothers lived near each other, and they attended neighboring county high schools.  Then both cut their teeth in the business working at Bowie as assistants to trainer Dale Capuano.

Dilodovico went out on his own in 1991 and has done very well, saddling 586 winners from 3,070 runners that earned over $11 million through 2013. In each of the last two years, his runners earned over $1 million.

“Mike has always been there with me,” Dilodovico said. “I’ve known him for over 30 years and he’s my best friend. I encouraged him to go out on his own. Mike’s got a great head for the game. He knows the racing, inside and out from top to bottom and I know he’ll do well.”

It won’t hurt that all three of the horses Geralis has are solid runners.

He expects to find an allowance race in the condition book for Bowman’s Boy later this month.  Always A Contest, a nine-time winner and earner of more than $150,000, has returned to training, but is still roughly one month away from making his seasonal debut.  And Service For Ten will likely run next month in either the $100,000 John B. Campbell Handicap at Laurel on February 15 or in the $250,000 General George two days later. 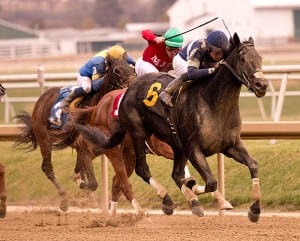 “Last year he nearly went wire-to-wire in the Campbell, then he tired a little late and ducked out into Norman Asbjornson and bumped him pretty good and then Gaudet’s horse [Concealed Identity] ran by us both,” he recalled.  “I’ll see how he comes out of the race and look at the nominations for both races.”

Lapidus said he would leave the scheduling up to Geralis and looked forward to seeing all three of his horses run at Laurel. Lapidus admits he is very selective when it comes to claiming horses.  He would like to find a few more runners to add to the Geralis barn at Laurel, but right now he is content with the trio he has.

“I know Mike will put the horses in the right spots,” Lapidus said. “I like seeing my horses run, whether it’s a claiming race or a stakes race. It just gives me a thrill to see the horses run and when they win, obviously, that’s a bigger thrill. I can’t wait to see how Service For Ten runs next month. I really wanted him to win Saturday, not for me but for Mike.”

Saturday’s Fire Plug Stakes may have marked the first time that Geralis and Dilodovico ran horses against each other.  But won’t likely be the last.  At some point Service For Ten will likely be in the same race as Immortal Eyes, a horse that Geralis usually saddled each time the horse left Maryland to compete in stakes in Charles Town.

“He’s the best horse that I’ve ever been around,” Geralis said of Immortal Eyes, who will likely make his seasonal debut in the spring for Dilodovico. “It’s going to be different to look across the stalls at him when I run against him at some point. It was a little different on Saturday running Service For Ten in my name and then seeing Damon saddle Warrioroftheroses and then realizing that we were trying to beat each other. I was hoping we would finish one-two in the Fire Plug – and I wanted to win it.”