Favorite things: “Something in his eyes”

Our “Favorite things” series looks back at our — and your — favorite stories, pictures, and videos of 2013.

During 2013, The Racing Biz teamed up with two regional equine nonprofits — Thoroughbred Placement Resources and Thoroughbred Retirement Foundation at James River — to promote caring for end-of-career racehorses.  As part of that, our series of “Retired Thoroughbred, Happy Endings” focused on horses who have had happy endings and the people that have enabled that to happen, such as this story about Lacrosse Moon.

“It was something in his eyes,” Lynn said later.

That something — a way of looking at us, rather than through us, I suppose, though it was more than that — began a relationship between us and Lacrosse Moon that we expect to last a long, long time.

It began in September 2009.  A local partnership had shares available in a 2 year-old son of Malibu Moon. He was a chubby colt that had had some early bad luck, but he was now ready to start training.  You could describe him as a strapping chestnut with two white rear socks and a white blaze that looked a little like an ostrich.  You could have described us as excited to be new owners. 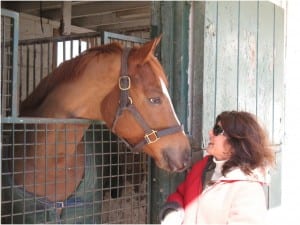 Even though his racing career ultimately did not start until the last race on the 2010 Preakness card 2010, we visited him each Saturday at Laurel Park in the barn of Rachael and Troy Lively.  It got to the point that Rachael could tell when Lynn was nearby — because Lacrosse would get so excited.  Nothing could keep him from looking for Lynn. He knew the lady with the carrots was on the way.

The relationship continued to develop despite warnings that you should not fall in love with a race horse.  Horse racing is a business, the warnings said.

Yet we could hear another voice, too: that of Michael Blowen, founder of Old Friends.  He told us that if people were not interested in taking care of their horses after their racing careers, then they should just race cars, which are disposable. Animals are not.

Lacrosse Moon’s partnership career would end in September 2011 with just one victory. Since he was not productive for the partnership, he was entered in the Fasig-Tipton Timonium December 2011 auction and the partnership dissolved — a common practice in the industry.

It was then that we decided to attempt to purchase him at the auction.  Lacrosse had provided us with so much fun and excitement that we felt it was our time to step up to ensure his well-being.  We knew there was a chance that he could be purchased by someone who might not prioritize his best interests, so off to the auction we went to try to buy Hip #261.

The bids climbed to, and then past, our $2,000 maximum. I turned to Lynn to say that was our limit.  But before I could get the first word out of my mouth, Lynn shrieked, “Don’t you let him go!”

I felt a hush over the room — even though I’m not sure it really happened — briefly thought about where I might live if I didn’t go higher,  got the auctioneer’s attention, and bid $2,500. The seconds seemed like an eternity as I waited to be outbid, but the next sound was “SOLD! For $2,500 to the gentleman in the back.”

We had our horse, and soon he was back in training.

Watching him train on the track was just as thrilling in 2012 as it had been in 2009. He loved to train and he loved his time on the track. Joanne Jones of HRTV even pronounced him as the “storybook horse” for HRTV as she relayed our story to the HRTV audience.

He — well, I — loved to document his progress and daily activities on his Facebook page. His fan club soared to 79 friends — not Zenyatta, but not bad for a horse with one career win!

Though Lacrosse Moon would never win for us, he did manage two very exciting seconds and four thirds in 17 starts. Friends and previous partners showed their support by coming to all of his races.

Perhaps never winning was our fault, since Lacrosse actually belonged in a $5,000 claiming race. But Lynn simply would not risk losing him to a claim.

On April 5th, Lacrosse was entered. The morning was normal. Lacrosse was alert and seemingly ready to run. At noon, Lacrosse was vanned to Pimlico for the race, but when he walked off the van, he was lame. We had to scratch.

X-rays showed  a chip in the knee, which required surgery.  The surgery revealed further injuries — more chips, damaged cartilage, and a slab fracture. 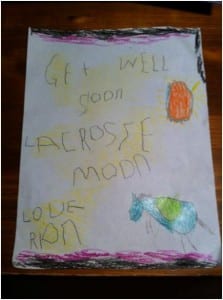 Lacrosse Moon — whom the doctor described as “one tough horse” — had to be retired.

Others might think we are “stuck” with an injured gelding that apparently is useless. But in reality, he is stuck with us. He introduced us to good friends and taught us everything we know about ownership: how much the backside workers do, how difficult it is to find the right conditions in which to race, and how much must go right to win.

Michael Blowen’s words continue to resonate in our minds. We did not make a two-year racing purchase at Timonium but a lifelong commitment.

Lacrosse Moon has touched many lives. Four year-old Riley Bodnar is now taking riding lessons after meeting him. Rion Nogel, just two when she visited Lacrosse for the first time, posted this get well card on Lacrosse Moon’s Facebook page when her dad told her that Lacrosse Moon was “sick.”

And we hope he will continue to touch others during his recovery and hopefully new career.

Lynn is taking riding lessons, and we hope that she and Lacrosse Moon can enter a horse show in the future.

For his part, Lacrosse Moon is on the road to recovery.  He is currently walking every day and is at least eight months away from having anyone on his back.

We will never know what caused Lacrosse Moon to pick that day to limp off the van. We do know that before each race, Lynn would whisper in his ear that the number one goal was to come back safely. Maybe he knew he could not promise that on April 5th. Maybe he knew we would not abandon him if he could not race. And maybe it was just time for a rest. No matter what it was, no one should ever underestimate the power of love between human and horse.

If you do doubt that love, go race cars.

A horse does not have to win to be a champion. To us, Lacrosse Moon will always be a champion, and he knows it.  You can see it in his eyes.

Michael will continue to document Lacrosse Moon’s recovery and new career on the horse’s Facebook page.