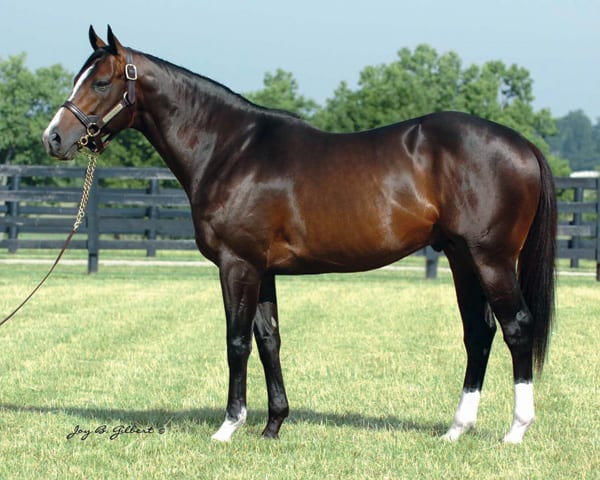 Breeders’ Cup Sprint-G1 winning stallion Silver Train died suddenly on Sunday, December 29 after a swift attack of colic while shuttling back to the United States from Brazil, according to Northview Stallion Station.

SILVER TRAIN has been among the nation’s leading young sires since his runners first appeared in 2010. He sired 14 stakes winners, six of them graded/group winners and two champions.

The winner of four graded races including the Breeders Cup Sprint (G1) and Metropolitan Mile (G1), Silver Train moved to Northview PA in September 2011, after being purchased by HnR Horseracing LLC. He had just completed his second season of Southern Hemisphere duty at Siquiera & Mercadante in Parana Brazil before his unexpected passing.

“Silver Train was all class, the consummate professional and will be sorely missed,” stated majority shareholder Hank Nothhaft.   “Given his proclivity for producing winners, we expected big things from Silver Train for years to come. Given our expansive plans for him in 2014, his sudden passing was a real shock.”

Each of the past three years, Silver Train’s progeny earnings have exceeded $3 million. He is represented by 30 stakes horses around the world, including Italian champion and Scandinavian champion miler SILVER OCEAN, Panama champion imported juvenile filly LADY OIL, Gr.1 winners ENAITZ and KING TOMATE (in Mexico), and graded/group winners J J’S LUCKY TRAIN and GUARAGUAU. He is the sire of five juvenile stakes horses in 2013.

“This is truly a solemn day with the unexpected passing of such a promising young sire, it is with a heavy heart we look towards the new year,” commented Carl McEntee agent for HnR Nothhaft Horseracing LLC.