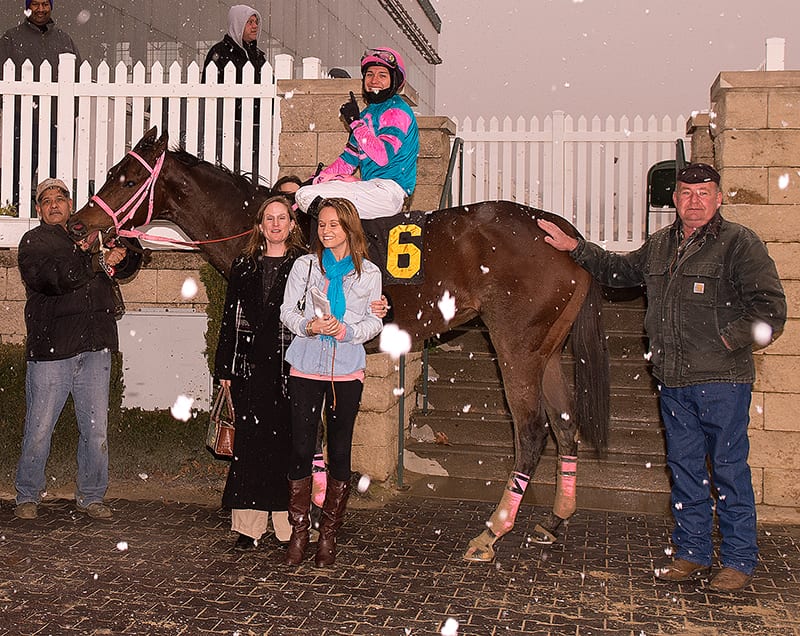 The twenty-year-old Juarez, who is the son of former rider Calixto Juarez and the grandson of exercise rider Charlie Linton, broke just a little 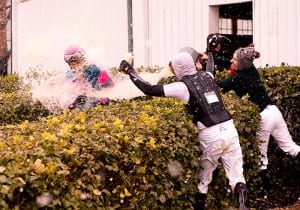 Bug rider Nik Juarez gets a bath in honor of his first win. Photo by Jim McCue, Maryland Jockey Club.

tardily aboard Love Heart as the field left the starting gate in the six furlong test. Juarez was unfazed as he carefully steered the daughter of Lion Heart to the outside and slowly gained on the leaders, finally reaching the front a furlong from home. Love Heart won by ¾’s of a length in 1:14.18 and paid $3.60.

“He is very hard working and honest,” said his proud father. “As long as he remains focused, I see a bright future.” The elder Jaurez had 513 wins in a career that spanned from 1990-2010.

“That was terrific,” said the beaming rider as he dismounted in the winners’ circle. “I want to work hard to keep getting better, to be the best.”

Juarez has been exercising horses for trainer Tim Keefe. He is a native of Westminster, Maryland and a graduate of Winters Mill High School.

On a side note, Juarez is the second 10-pound apprentice to achieve a career mark this week at Laurel Park. On Thursday, 37-year old South American native Carlos Gutierrez won for the first time since his arrival in the United States.