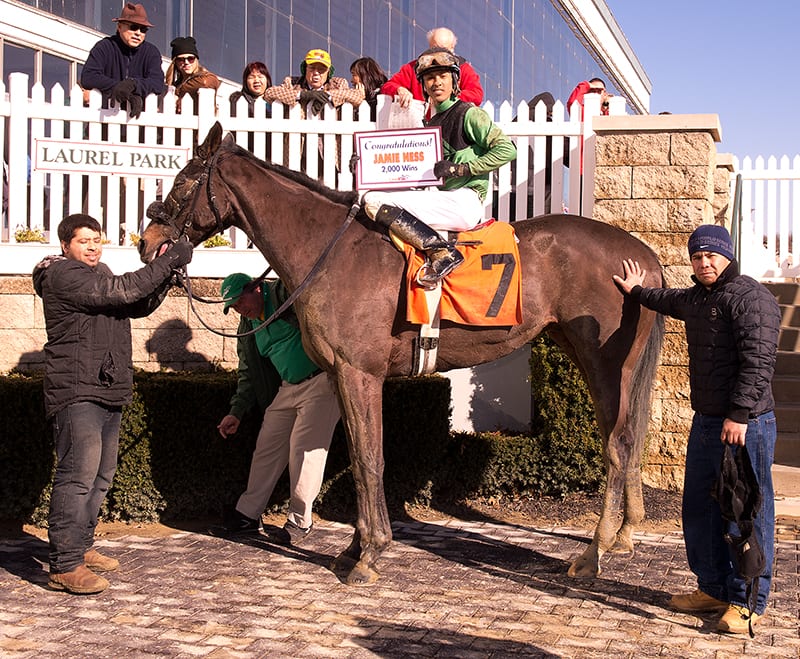 Trainer Jamie Ness won for the 2,000th time in his career when Caylee’s Song took today’s second race at Laurel Park. The 6-year-old gelding beat six other claimers and paid $4 as the even money favorite. Ness narrowly missed reaching the plateau in the opener when Pelican Cove was beaten a head.

Ness watched on his iPad from Tampa where he is spending the Thanksgiving holiday with his family. He is looking for his seventh consecutive training title at Tampa Bay Downs when that meet opens next week.

“I felt pretty good about reaching the milestone today,” Ness said. “It just seems like yesterday I won my 1,000th. The last 1,000 came pretty fast. I am happy for my staff and my owner (Midwest Thoroughbreds).”

“I took my bumps and bruises the first few years and just tried to learn how to do things right,” added Ness. “I made a lot of mistakes and every time I did, I tried not to do it again. With experience you get better just like any business. We started to get better and better each year. The last few years we have stayed consistent and that is what I am most proud of.”

Last year, the 39-year-old led all North American conditioners with 395 victories, including 83 at Laurel and Pimlico, after finishing as the runner-up in 2010 and 2011.

Ness has 20 victories at the current fall meeting, two behind Hugh McMahon.

“I bought a house near the Baltimore airport in September and plan on spending the winter here in Tampa and in Maryland,” Ness said. “I will keep 35 or 40 horses at Laurel, a barn full at Tampa and a few at Gulfstream. I will be back and forth all winter.”

Red-hot apprentice Victor Carrasco was aboard for the milestone score. The 21-year-old won two races on the holiday card, also reaching the wire first with Isolation Road in the opener. He leads the Laurel fall standings with 41 victories and ranks 17th in North America with 184 scores.

“I am happy to be part of Jamie Ness’s 2,000th winner,” Carrasco said. “I just keep working hard and appreciate the trainers for giving me opportunities.”

Carrasco has won 21 races at Laurel so far this month and in the process moved to the top of the North American apprentice rankings in both victories and earnings ($3,622,465).