Voices of jockeys are strangely quiet in racing policy debates 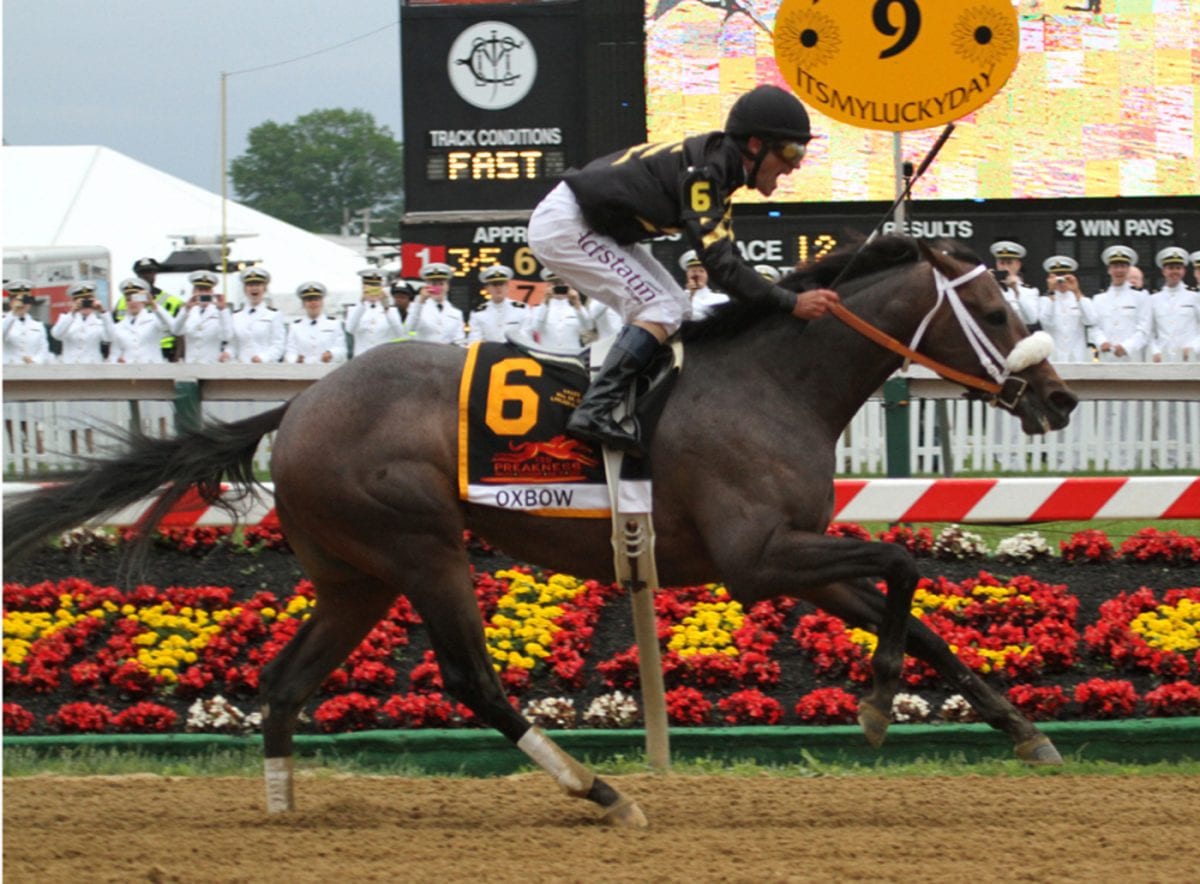 They are voices we don’t hear very often in racing policy discussions, those of jockeys.

When we think of them, we tend to think of, say, Gary Stevens or Mike Smith.  It’s easy to call up an image of Stevens pumping his fist as he and Oxbow zipped across the Pimlico finish to win the Preakness; or of a wide smile creasing Smith’s hang-dog face after another win by Royal Delta. 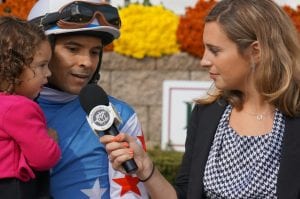 Richard Monterrey holds daughter Daniella while talking with Gabby Gaudet after winning the Maryland Million Nursery aboard It’s a Bang.

For a handful or riders, that’s real life.

Then he sat down with his daughter, Daniella, who’s not yet three.  Near him sat a small handful of other riders.

The issue bedeviling him — when apprentice weight allowances must be taken (here) — is an obscure one, and it’s an open question as to how significant it is to his business and livelihood.

But the truth of the matter is that Richard Monterrey telling the Racing Commission that he’s struggling to make a living is much closer to the experience of most jocks than is Stevens or Smith winning big races.

Monterrey’s mounts this year — all year — have earned about $1.1 million.

His voice, and those of other middle-of-the-road riders trying to cobble together enough work, should be heard.

You’d imagine that they would be, that jockey issues — in a sport where they are, after all, the only human athletes — would be front and center in many racing policy discussions.  They face all sorts of concerns, from the physical dangers of riding to the challenges of making absurdly low weights, from the difficulty of making a living to the prospect of insuring themselves.  As hard as this game is on most of its participants, at least the owners and trainers walk away in one piece at the end of the day; even that is not guaranteed to riders.

So, yes, you’d imagine that these issues would be front and center.

And you’d be wrong.  As Teresa Genaro reported (here), for example, only one state racing commission — Delaware’s — was represented at the International Conference on the Health, Safety, and Welfare of Jockeys held at Monmouth Park in September.

There are many reasons for that.

For one thing, jockeys are, by custom, independent contractors.  When you strip away the fancy term, it means they’re free to do what they want: to win all the big races, to pilfer mounts from their lesser brethren.  To ride three in a week.  To fall and get injured and depend on the charitable instincts of the racing community.

They’re also fiercely competitive with each other, a situation that doesn’t always breed the brotherhood necessary to amplify their voices.

You have to wonder if language factors in, too.  Most jocks are native Spanish-speakers, often with a somewhat limited grasp of English.  Most decision-makers are native English speakers, usually with no grasp of Spanish at all.

And then we come to the jocks’ representatives, the Jockeys’ Guild.  Under the leadership of since-ousted L. Wayne Gertmenian, the organization’s travails attracted even Congressional attention; phrases like “absolute disgrace” and “biggest mistake” attached themselves to Gertmenian and the organization (here).

These days, with Terry Meyocks the National Manager, the clouds seem to have lifted; the organization is generally considered to be well-meaning, headed in the right direction.  The Maryland Racing Commission announced yesterday, for example, that Guild representative Mindy Coleman is going to become a member of the Commission’s Health and Safey Committee, a good step.

But yesterday’s Commission  meeting was the second in recent months in which the Guild seemingly had not completed the basic spadework — reaching out to other concerned parties — that might have smoothed their proposals’ way to passage.  The result, also for the second time in recent months, was protracted debate and further delay on an issue that many jocks believe to be consequential.  “Disorganized,” one observer called the Guild afterwards, and it was hard to disagree.

Progress in strengthening the voice of the riders continues, slowly.

Meanwhile, Richard Monterrey has one mount on Wednesday and another on Friday.