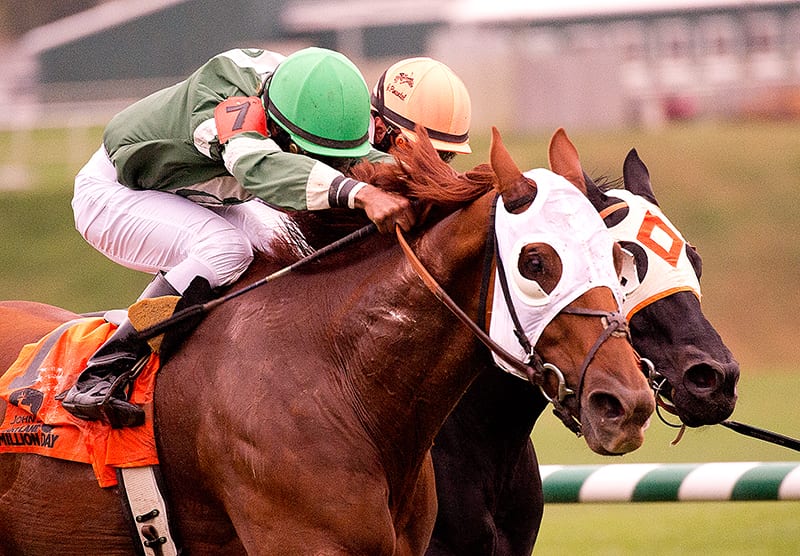 The thirty-one stakes races conducted during the Laurel Park fall meeting will take place on six selected days — including this Saturday, November 9.  The final four races on Saturday’s nine-race program are each $100,000 contests: the Geisha Stakes (race 6), the Safely Kept Stakes (race 7), the Japan Racing Association Stakes (race 8) and the City of Laurel Stakes (race 9).

“A highly competitive field,” Feustle said. “It was a tough one to make the line. Any one of the four could end up being the favorite. It wouldn’t surprise me.” 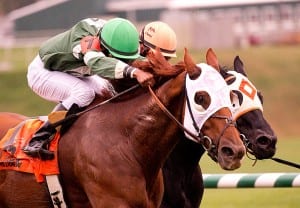 Edge of Reality, the tepid 5-2 morning line favorite, has won 4-of-8 this year, including the Smarty Jones Stakes (G3) two back. Alex Cintron will be aboard the son of Lawyer Ron for Tony Dutrow.

“I don’t usually like to handicap when I make the morning line but he matches up with some key horses, including Will Take Charge,” Feustle said. “I think he and City of Weston have faced the toughest competition recently.”

Feustle’s second choice at 3-1 is Falling Sky, who captured the Sam Davis Stakes (G3) earlier this year, was third in the Tampa Bay Derby (G2) and fourth in the Arkansas Derby (G1) before a last place finish in the Kentucky Derby (G1). The son of Lion Heart will make his first start for the George Weaver barn.

“Falling Sky has been off since May but when you look at his PP’s you see Verrazano, Overanalyze,” Feustle said. “He has run against quality opponents.”

Bold Vigilante (7-2) won three straight, including the Claramount Stakes at Saratoga, before a third place finish at Charles Town in his last start. Chad Brown conditions the son of Salute the Sarge.

“Bold Vigilante is a New York-bred but the name Chad Brown is going to spark enthusiasm at the window,” added Feustle. “Though, I think this is his toughest task to date.”

City of Weston (9-2) comes into the race off an impressive victory in the Gallant Bob Stakes (G3) at odds of 30-1. The son of Holy Bull has finished on the board in nine-of-11 races this year.

“He may attract more attention but Antonio Sano is a trainer the Maryland bettors are not familiar with and it may make this horse be a higher price,” added Feustle. “But he merits a ton of respect from a handicapping standpoint. He will not be disrespected in this one.”

In a promotion exclusively for City of Laurel residents, Saturday will feature free admission, general parking, a “Make a Bet on Us” voucher, prize giveaways and food and drink discounts. Laurel Mayor Craig Moe will make the winners’ circle presentation to the winning connections after the race.

The Japan Racing Association is set for 1-1/16th on the turf for 3-year olds and up. The gate will have a full field of runners, including back-to-back Maryland Million Turf winner Roadhog (10-1). The Lizzie Merryman trainee must contend with morning line favorite Paris Vegas (3-1), Utley (7-2), Shug McGaughey shipper Air Support (9-2) and Riding the River (5-1).

“He is a very consistent horse,” said jockey Kendrick Carmouche, who has ridden Roadhog to two straight scores. “He gives you a good kick each and every time. It is my job to get him into the right spot and hope for racing room in the end because he will do his part the last quarter of a mile.”

The Safely Kept, a seven furlong test on the main track, will feature thirteen 3-year old fillies, including Maryland Million Distaff winner Maddy’s Dance (15-1). The 2-1 morning line choice is Crazy About Me, who comes into the race with five consecutive victories. Carmouche will ride her for the first time.

“She looks like she’ll be forwardly placed,” added Carmouche. “She drew the outside post which is advantageous.”

The Geisha, for Maryland-bred or sired fillies and mares, goes one mile on the main track and has attracted seven starters. The Geisha reunites Monster Sleeping (4-1) and Daydreamin Gracie (2-1), the 1-2 finishers from last month’s Maryland Million Ladies.

Laurel Park will also celebrate Veteran’s Day Saturday. All active and retired military (and a guest) will receive free admission and 25% discount on all food and beverages as part of “Salute the Troops”. There will be a Joint Service Color Guard between races and military vehicles on display. The day will benefit Horses for Heroes-Maryland Therapeutic Riding.