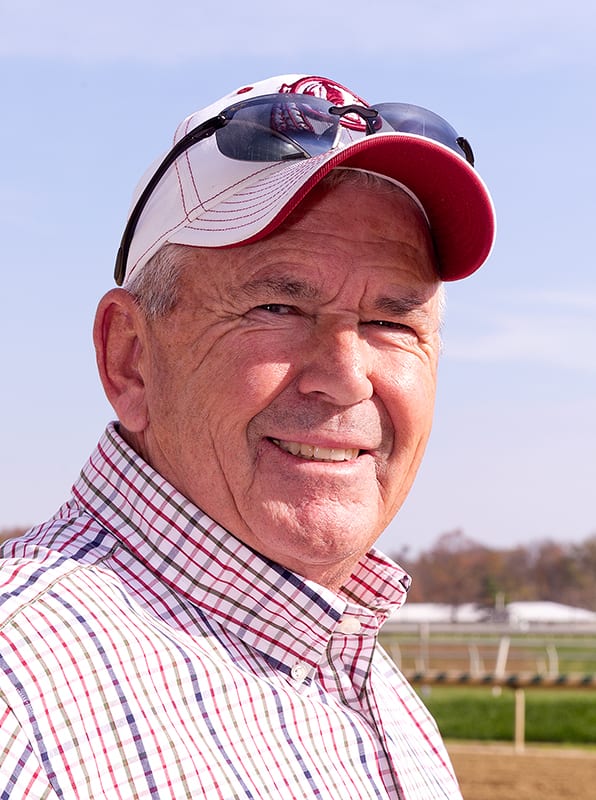 Jerry Robb is best known for conditioning Little Bold John, who retired in 1993 with 38 wins in 105 starts and earnings of nearly $2 million. LBJ’s 26 career stakes victories represents a Maryland-bred record. His victories included the Donn Handicap (G1) and the 1987 Maryland Million Classic.

On Saturday, the 61-year-old will saddle three Maryland Million runners, including the morning line favorites in the first two races on the card, the $100,000 Nursery and the $100,000 Lassie.

In the Nursery, Robb will send out Joint Custody (7-5), who is a perfect two-for-two. The son of Outflanker will face six other 2-year-old boys and drew the rail.

“Would have rather had an outside post,” Robb said. “He has speed so we’ll just have to do with what we get. It took a long time to even to get him to breeze. He’s a big lazy horse, wouldn’t do anything. Since we’ve put the blinkers on him he’s really woken up. I think he’ll be better going longer and the older he gets the better he’ll be.”

Jonesin for Jerry, a daughter of Great Notion, who has finished first or second in four of six lifetime starts is the prohibitive 4-5 favorite over seven other 2-year-old fillies in the Lassie.

Robb has six Maryland Million victories during his career and is tied for seventh on the all-time win list. Four of his other five wins were with 2-year-olds: Ameri Allen (Lassie, 1990); Carnirainbow (Lassie, 1992); Run Alden Run (Nursery, 1993) and Glib (Nursery, 2011).

Ben’s Cat has a chance to move into the record books. Owner/trainer King Leatherbury cross-entered his star into both the $125,000 Turf and $100,000 Sprint. Action Andy or Roadhog will be facing Ben’s Cat, the highest-profile runner on Saturday’s 11-race card.

Maryland Jockey club handicapper Keith Feustle made the son of Parker’s Storm Cat the morning line choice in both races.

Leatherbury said Thursday morning the decision would go “down to the wire” but expects to decide which race to start on Friday afternoon.

Roadhog comes into the race in fine form. The son of Bowman’s Band has captured a pair of stakes races in Pennsylvania since mid-July for trainer Elizabeth Merryman. The 6-year-old gelding is the 9-2 third choice in the Turf.

Action Andy has not run since finishing eighth in the Maryland Sprint Handicap (G3) on the Preakness undercard. Trainer Carlos Garcia gave the son of Gators N Bears the summer off. Since returning in August, he has logged three bullet workouts. The 6-year-old is the 7-2 third choice in the Sprint.

Ribo Bobo, who has won eight straight, is the second choice in the Sprint and an overwhelming 2-5 pick to dethrone Varborough in the $50,000 Starter Handicap, the last race on the program. The defending champ, who is two-of-12 this year, is 15-1.

Pagan Priestess is the 4-1 second choice in the $125,000 Ladies, a contentious 10-horse field. The daughter of Oratory is winless in five starts as a 5-year-old, but has finished on the board in three of her last four. Forest Boyce has been aboard all three in the money finishes  and has the riding assignment Saturday.

“We’ll save some ground with her breaking from the inside post,” Boyce said. “The last couple trips with her were pretty rough. Last time (Oct. 3 at Delaware Park) we were up against some tough company but she really ran great. I think she ran a winning race that day. She’s been running well. We will just save ground and make one run.”

Motherload Hipster is the 7-2 second choice in the $50,000 Distaff Starter Handicap. Lisa Guerrero claimed the daughter of Dance With Ravens out of her last start with this spot in mind.

The other previous winners on the program are Eighttofasttocatch, who is looking to win the Classic for the second time in three years, 2009 Turf winner Target Sighted and Classy Coco, who took the Lassie a year ago.