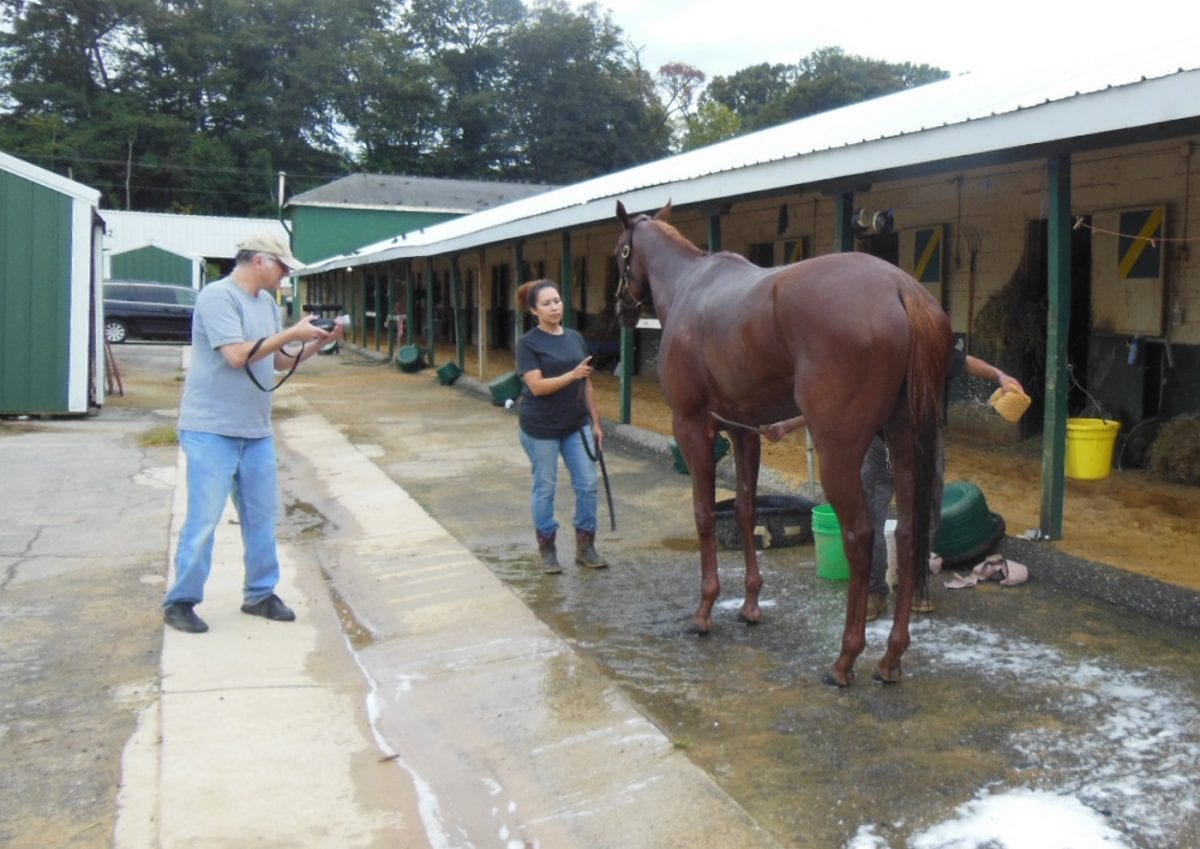 Dance to Bristol saw her seven-race win streak come to a halt when she ran second to the undefeated Cluster of Stars in the Grade II, $300,000 Gallant Bloom Handicap at Belmont Park last weekend.

But owner Susan Wantz accepted the setback with dignity.

And well she ought to.  Dance to Bristol, a $42,000 auction purchase, had won five straight stakes heading into the Gallant Bloom, including the Grade I, $500,000 Ballerina at Saratoga, securing a spot in the $1 million Breeders Cup Filly and Mare Sprint on Nov. 1. Her setback in the Gallant Bloom did not phase Wantz or trainer Ollie Figgins, III. 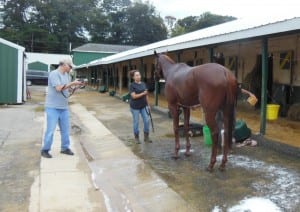 Dance to Bristol — here getting a bath while Jeff Krulik looks on — is a long, leggy sort.

“I thought she ran very well,” Wantz said. “But you have to give all the credit to Cluster of Stars. She ran a tremendous race. They really had her ready to run off the layoff and she ran exceptionally well. I don’t think Dance to Bristol was going to beat her that day. We got beat five lengths, but I don’t think we could have come within two lengths of her even if our filly had run her best race.  You have to commend Cluster of Stars – she was very good that day.”

Figgins concurred.  “I was happy with her race and I was pleased with the way she came out of it,” he said. “She chased a real nice filly who was really good that day. I didn’t have my filly completely tightened. She had two good workouts [at Bowie] but they were just tuneup works.  Believe me, before she runs in the Breeders Cup she’ll get two faster works in her, one at Bowie and probably one at Santa Anita.”

Like Dance to Bristol, Wantz is a relative newcomer to the brightest lights of top level competition.  Not that she hasn’t prepared for it.

Part 3 of a series

Over the past 20 years, David and Susan Wantz, who own and operate Copperville Farm in Taneytown, Maryland, have run a number of their homebreds around the mid-Atlantic, toiling, like most, in obscurity.

That all changed three years ago, though, when they decided to venture to the yearling sales in search of bargains.  Among the horses they’d targeted was a filly by Eclipse-winning sprinter Speightstown out of the winning Louis Quatorze mare Dance to Dawn — a horse  on which they were willing to spend in the $40,000 range.

Dance to Bristol had galloped well for the potential buyers on hand, but she was tall and narrow and her airways did not scope clean.  When the bidding reached $40,000, the Wantzes were nearly at their limit.  They made one more bid, to $42,000 — and then watched as none of the other prospective buyers went higher.  Dance to Bristol was theirs.

“We thought the prices at the sale would stay down,” Susan Wantz said. “But we were really not going to go much above $40,000 to get her. If she had gotten another bid we might not have gone higher. I liked the way she galloped at the sale. She went fast, but the knock on her was her size and her wobbly way of going and she had a minor breathing issue. But we knew if we took our time with her she would turn out to do pretty well.”

[pullquote]I treat them all with care, whether they’re stakes horses like her or $5000 claimers,” said Susan Wantz.  “I don’t have any children, so the horses are like my children.”[/pullquote]

And take their time they did.  After debuting in late September of her two year-old season, Dance had, by early the following spring, won three races, two of them in stakes company.

But following back-to-back seconds, Figgins did not like the way she came out of a race at Parx and suggested a brief vacation was in store for the filly.  Though for most horses the three year-old season provides the greatest money-making opportunities, the Wantzes didn’t hesitate.

“I love all of my horses,” Susan Wantz said. “I treat them all with care, whether they’re stakes horses like her or $5000 claimers. I don’t have any children, so the horses are like my children.  She had some issues in her back end, so we wanted to give her some time off.  She was off eight or nine months when she came back.  She got beat in that allowance race at Laurel, and that’s when we decided to switch jockeys and go with Xavier [Perez].”

With Perez aboard (here), Dance to Bristol fashioned a seven-race winning streak that included three graded events — the Grade III, $150,000 Bed O’Roses Handicap, the Grade II, $300,000 Honorable Miss, and finally the Grade I Ballerina at Saratoga, where she outlasted Book Review in a thrilling stretch drive.

The stake streak began, though, in more modest surroundings.  Back in April, she’d blitzed the field in the ungraded Sugar Maple at Charles Town.  One of her beaten rivals — Holiday Soiree — returned two weeks later to run third, beaten less than two lengths, in the Grade I Humana Distaff at Churchill Downs.

“We knew she was going to be a very good horse before the Sugar Maple,” Wantz said. “But after that race everybody started to come out of the woodwork. We even got calls from people asking when we were going to change trainers. But Ollie is an excellent horseman. He’s done a great job with her and all of our horses. She just kept winning, and when we got to the graded stakes she really displayed her talent and her class. She’s really a nice, well-natured filly and she looks elegant on the track.”

Dance to Bristol is expected to spend the next two weeks at Bowie before heading to Santa Anita around mid-October for her final preparations for the Breeders Cup Filly and Mare Sprint, where her rivals will likely include defending champion Groupie Doll, hard-hitting Book Review, and possibly Cluster of Stars, whose connections would have to ante up the supplement in order to get her in the Grade I affair that will likely decide Eclipse Award for that division.

“It’s been quite an exciting ride thus far,” Wantz said. “Anytime you have small-time owners like us with a horse like this, it’s fun and it’s exciting. We don’t have the money to buy expensive yearlings and to run in stakes races all over the country. So for us to have a filly like Dance to Bristol win those graded stakes and race against the best horses in the country is really exciting. We’ll see what happens over the next three or four weeks and see where she takes us. We’ve tried to do our best by her and she’s been good to us.”

(In the video below, Ollie Figgins, III, discusses what it means to him to have a horse like Dance to Bristol in the barn.)