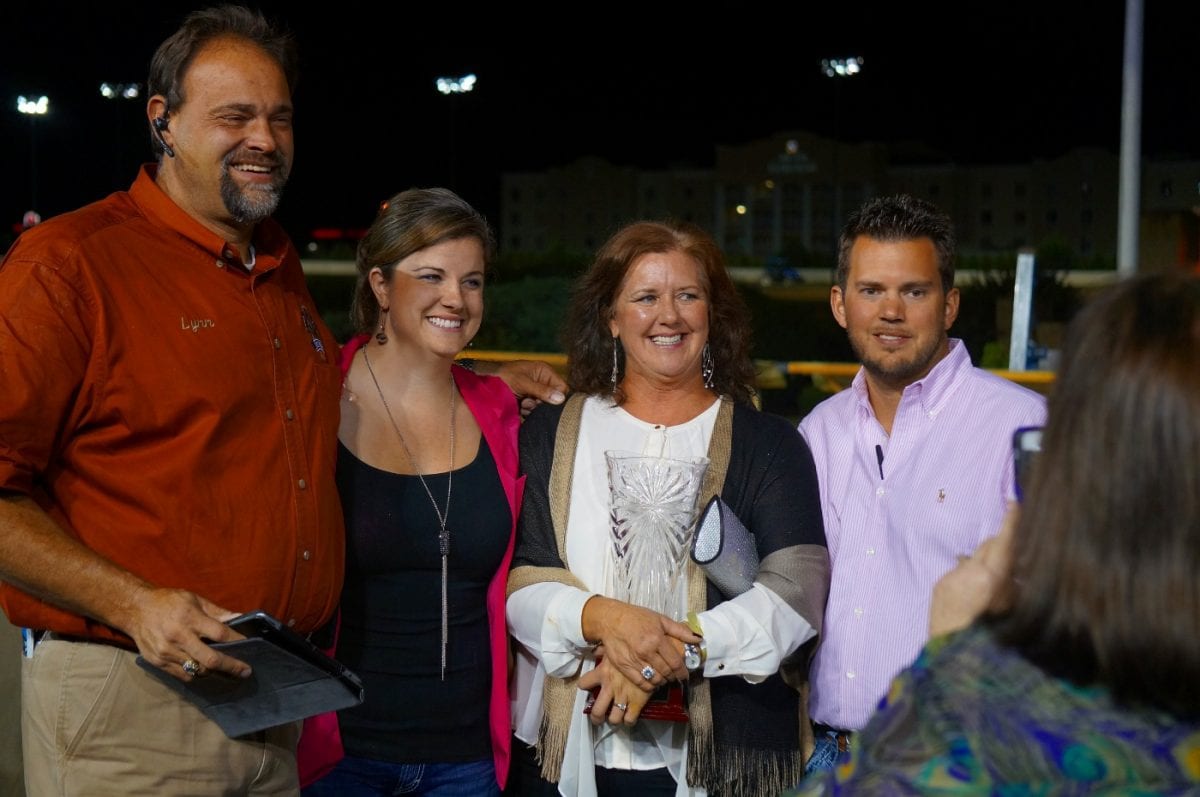 Each year the National Turf Writers and Broadcasters  Association hands out the Mr. Fitz Award to  any individual or group that typifies the “spirit of thoroughbred racing.”  That spirit was certainly on display after a couple of races on Charles Town’s stakes-stuffed Saturday card.

Lynn and Lola Cash watched their three-year-old colt Take It Like a Man splash to victory in the seven-furlong, $400,000 Researcher Stakes [formerly the Red Legend] over a rain-soaked sloppy track. While the Cashes were on hand to see their son of Run Away and Hide notch his first stakes victory for Keeneland-based trainer Kellyn Gorder, the connections of $400,000 Charles Town Oaks heroine So Many Ways, owner Maggi Moss and trainer Tom Amoss, bypassed the trip altogether, missing So Many Ways’s final victory before being sold to Japanese interests the following day. 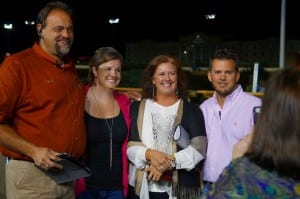 Lynn Cash (left) and Lola Cash (second from right) are all smiles following Take It Like a Man’s Researcher victory. Photo by Vas.

Lynn and Lola Cash fell in love with Thoroughbred racing early in 2012 and thought they’d get into the business in a year or two.  As it turned out, by June they were en route to Ocala, where they intended to buy one horse.  They eventually bought three, but they were the underbidders on Goldencents, hero of the Grade I, $750,000 Santa Anita Derby in the spring. The Cashes stopped bidding at $60,000, but Dennis O’Neil, brother of trainer Doug O’Neil, made one more bid and got him for $62,000.

The Cashes left with Take It Like a Man and two other runners, but until last Saturday they were always thinking about the one that got away.

“Dennis O’Neil came up to me after the sale and told me he was supposed to stop at $60,000,” Lynn Cash said in a festive Charles Town winner’s circle, before being scurried out by a track security person 22 minutes before the Charles Town Oaks. “We were the underbidders on Goldencents by $2000 and now he’s made over $1.4 million.”

“But this colt continues to get better with age,” said Lola Cash, noting he is akin to her seven kids, only one of which has yet to graduate high school. “He just keeps getting better and better. He’s much more mature now than he was a year ago. We’ve always liked him.  Now we have a stakes winner. We only have three horses, but this is exciting.”

Like several other horses in the two adjacent $400,000 stakes on the card at Charles Town last weekend, Take It Like a Man had been cross-entered for a race that day at Parx, in his case the Grade 3 Gallant Bob.

“We thought about the race at Parx, but we decided to come here,” Lola Cash said. “We liked his chances in this race. When he made his move down the backside, we thought he had a good chance of winning.”

“When he heads into the far turn, that’s when he likes to turn it on,” Lynn Cash added.

Gorder relished the media attention.  In the moments immediately after the race, he said was unsure what race was in store next for Take It Like a Man — or even whether the colt was nominated to the Breeders’ Cup.  But perhaps that’s not so surprising, since until now this hasn’t been the type of horse for which one maps out a campaign.  “He broke his maiden for $50,000, so, you know,” Gorder said with a shrug.

Take It Like a Man hardly seemed like the logical horse to upend either Bold Vigilante, the Chad Brown trainee who had won three straight races against New York-breds, or Our Double Play, hero of the $60,000 Prairie Mile at Prairie 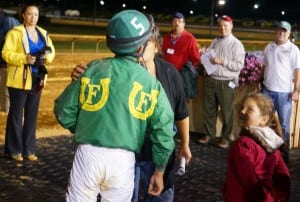 Gustavo Larrosa gets the winner’s reward after piloting Lucy’s Bob Boy in the Wild and Wonderful. Photo by Vas.

Meadows on June 1.  Though he arrived having won more than one-half of his seven starts this season, but in the latter stages of the Keeneland spring meet he won a $30,000 claiming race for three year-olds and up that had never won two races.

“He’s kind of an interesting horse to look at,” said Gorder.  “When you look at him from the side, he looks big and strong.  But when you sit on him, he’s kind of narrow.  He’s sort of like a fish.”

“He gets better every race,” noted Lola Cash, “and he’s bigger every time we see him.  He’s coming of age, so… wow.”

“Wow” is also a handy word to describe Lucy’s Bob Boy.  The gelded son of Flatter, who holds the Charles Town track record at seven furlongs, has won 15 of 19 career starts and earned nearly $600,000.  Usually a front-running sort, on Saturday he sat off a fast-paced duel between Isthmus and Tomorrow’s Tale before crusing to a two-length victory.

The post-race celebration following the horse’s win in the Wild and Wonderful was, if not quite as energetic, no less heartfelt than the Cashes’ celebration one race later.

Furr’s now-deceased uncle, Robert Furr, bred Lucy’s Bob Boy.  Michael Furr still has the mare, Love for Lucy, and she is, he reported, in foal to Flatter once again.

As for Lucy’s Bob Boy, Furr said the gelding is “by far” the best horse he’s owned.

“It’s really nice,” he added, “and I think about my uncle every day.”