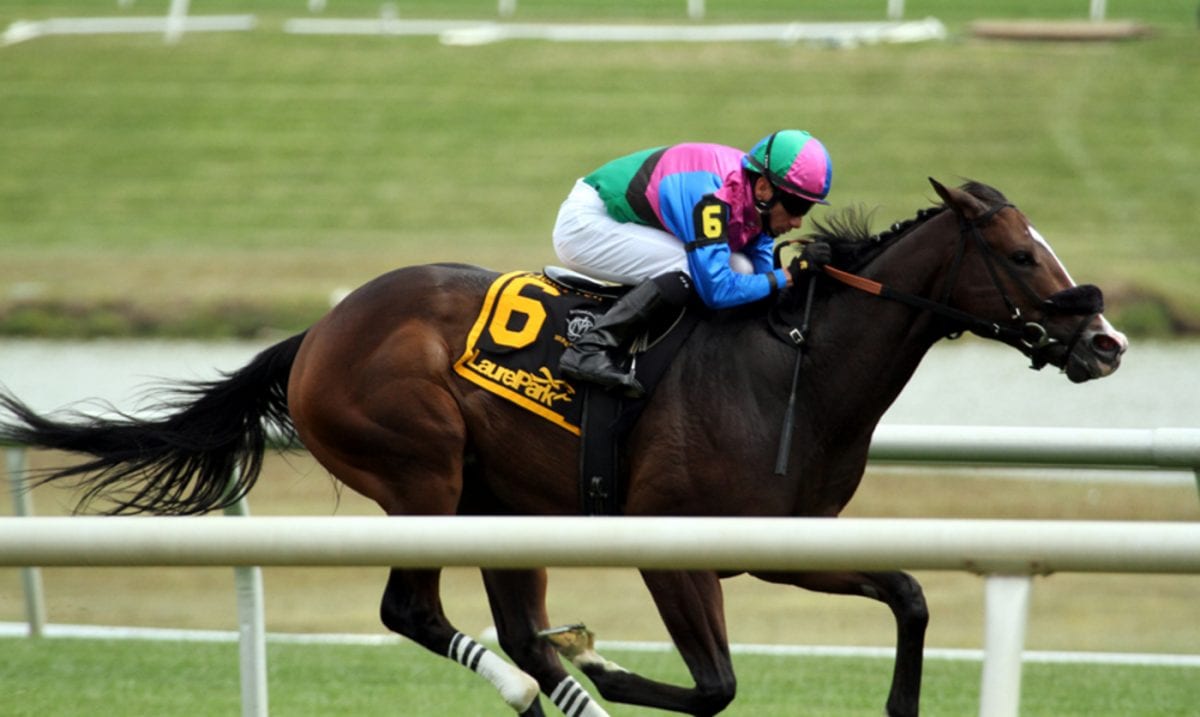 Secretariat won here.  So did Barbaro.

So, for that matter, did Mom’s Command and Shuvee, Housebuster and Smoke Glacken.

On Saturday at Laurel Park, the Maryland Jockey Club ran three races — the Laurel Futurity and Selima Stakes for two year-olds and two year-old fillies, respectively, and the Frank J. De Francis Memorial Dash — that once were among the bellwether events in their divisions.  They were races that made champions and, on occasion, helped to launch Hall of Fame careers. 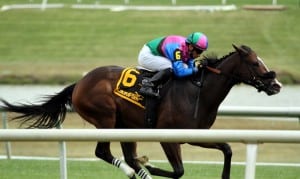 Yes I’m Lucky is much the best in the Laurel Futurity. Photo by Laurie Asseo.

No one knows what the future holds for this year’s winners — Yes I’m Lucky, Aibhilin, and Immortal Eyes — but the smart money doubts that among them is a Hall of Famer or a champion.  These days — now a couple of years removed from mothballs — all three races are ungraded.  The two juvenile contests carry purses of just $100,000, not chump change by any means, but nothing too overwhelming in these days of slots-enhanced purses.

Yet if you think the lack of a grade, or even purses that no longer stand out, have robbed these races of their cache, you had only to spend a few minutes with the winning connections to realize that nothing could be farther from the truth.

“This takes on extra meaning,” said Gareem Nicholas, the young assistant to Eddie Plesa, Jr., trainer of Yes I’m Lucky.  His charge took the Futurity impressively, winning by more than six lengths and stopping the clock in 1:01 1/5 for 5 1/2 furlongs on the grass.  He earned a Beyer speed figure of 88.

“This race was a big milestone for two year-old colts,” Nicholas added.  “It’s died down a little, but it’s still a big race, so it feels good to win it.”

As for his horse’s future, Nicholas way somewhat coy, other than allowing that we should look for Yes I’m Lucky in Florida down the road and that he thinks the horse, who has never been beyond 5 1/2 furlongs, will stretch out.  The son of Yes It’s True out of the multiple stake-winning Dove Hunt mare Whenthedoveflies has now won four of five races, with two wins on dirt and two on turf.

In the featured De Francis Dash, hard-hitting local star Immortal Eyes zipped to the early lead and never looked back.  The eight year-old Greatness gelding ran the last quarter mile in less than 23 2/5 seconds — stopping the clock in 1:08 2/5 for six furlongs — while widening his winning margin to nearly seven lengths.  His 108 Beyer speed figure was the week’s highest stake-winning figure.

“I’m just so emotional right now,” said owner Bobby Abbo after posing for the win photo with trainer Damon Dilodovico, rider Travis Dunkelberger, and some of his friends.  “To win a big race like this in Maryland…,” he added, his voice catching.

Abbo teared up during the post-race interview and did so again later.  It’s been quite a journey for his star horse.  Immortal Eyes, winner of 17 races, became a millionaire with the win.  But earlier this year, Abbo had nearly sold the horse — to another of Dilodovico’s clients.

“He’s no longer for sale, in case you were wondering,” Abbo said with a laugh.

Since then, the horse has won three times, twice in stakes, at Monmouth Park.  But returning home to Maryland gave him his biggest score to date.

Abbo says that Immortal Eyes likes to hear his hooves hit the ground, and that he likes to be by himself.  He managed both of those on Saturday, asserting a clear early lead and never having to stare down competition while skipping across the sloppy, sealed main track.  “He really heard his feet click today,” said the owner.  “He was on fire.”

Though the De Francis has produced four Eclipse-winning sprinters, most recently 2006 champ Thor’s Echo, there’s no championship in Immortal Eyes’s future.  His next stop is most likely the ungraded Fabulous Strike at Penn National.

The De Francis, of course, is also ungraded.  Whatever made Abbo’s emotions bubble up, it was not the grade.

Someone asked if it was the money.  Abbo laughed.

“Money, I got,” he said, before his voice drifted away again.  “To win a big race like this in Maryland…”