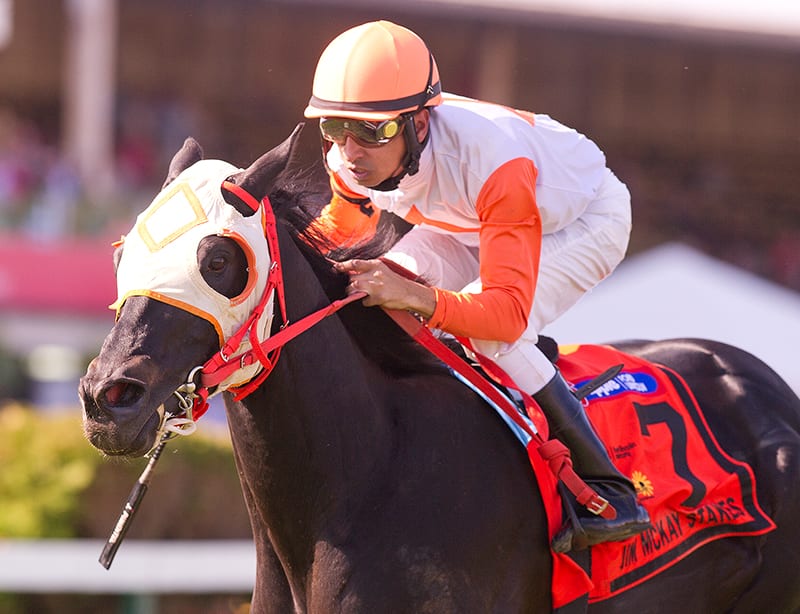 Nine sprinters have been entered in Saturday’s 22nd running of the $350,000 Frank J. De Francis Memorial Dash at Laurel Park, including local star Ben’s Cat. Post time for the 11-race card will be 1:10 p.m. Eastern.

The Fall Festival of Racing card also features five open stakes races on the turf: the Laurel Futurity for 2-year-olds, the Selima Stakes for 2-year-old fillies, the six-furlong Laurel Dash, the Lady Baltimore Stakes for fillies and mares, the 1-1/2 mile Laurel Turf Cup plus the Jameela Stakes for Maryland-breds.

Owner-trainer King Leatherbury cross-entered Ben’s Cat, one of the top turf sprinters in the country, into the De Francis Dash and the $100,000 Laurel Dash, a race he won two years ago. The 7-year-old is 8-of-12 on the dirt, including three stakes scores, though 13 of his last 14 starts have been on the grass. The son of Parker’s Storm Cat has 14 turf stakes wins on his resume.

“This has been on our radar since last year when the winner didn’t run any faster than Ben’s Cat has on the dirt,” Leatherbury said. “Once we found out it was a full field on the turf, we decided to cross-enter and will handicap the De Francis and have a choice. There doesn’t appear to be any super horses in the race. Early in his career he ran some big races on the dirt but we decided to keep him on the turf and dodge some of the really top horses on the main track. We can make more money by finishing second in the De Francis than winning the other one, which is a good situation to be in. It will be fun to handicap and see where we end up running.”

Sage Valley is the 9-5 morning line favorite. The son of Discreet Cat has a pair of graded victories this year, visiting the winners’ circle in the Maryland Sprint Handicap at Pimlico in May and the James Marvin at Saratoga in July. In his last start, the Rudy Rodriguez trainee was fifth in the Forego (G1).

“We are bringing him back a little quickly but he seemed to come out of that race pretty good,” Rodriguez said. “I think he should be close to the lead and if he doesn’t break well we will be close. It would be nice if he could run as big as he did on Preakness day. He is a very nice looking, well-bred horse. We are having fun with him and hope that continues.”

Saturday’s Charm (5-1) has had a consistent 4-year-old campaign for Steve Asmussen with five in the money finishes in seven starts, including a third place finish in the Tom Fool (G3). Rosie Napravnik, who has four career riding titles at Laurel in her career, has the call.

Brigand (6-1) won the City of Laurel Stakes here last December and crossed the finish line second in the General George Handicap (G3) two months later but was placed fifth after bumping another runner early in the race. Since then, the Bob Baffert trainee has been off the board in a pair of starts. Martin Garcia, who teamed up with Baffert to win the 2010 Preakness Stakes (G1) on Lookin At Lucky, has the riding assignment.

Il Villano (6-1) lost last year’s De Francis Dash by a nose to Action Andy but came back to win the Dave’s Friend Stakes two months later. The 4-year-old son of Pollard’s Vision has been out of the money just twice in 12 starts. The Susan Crowell trainee has been off since a second place finish in the General George (G2).

Immortal Eyes (8-1) finished a 1-1/2 lengths behind Action Andy and Il Villano in last year’s De Francis Dash despite nearly going down to his knees leaving the starting gate. It was the second close call in the De Francis for the son of Greatness who finished second in the 2011 running. Trainer Damon Dilodovico has run the 8-year-old eight times this year with  four victories, including two stakes scores at Monmouth Park over the summer. Travis Dunkelberger is his regular rider.

“We are hoping we can get it done for Mr. Abbo (owner Robert Abbo) and Immortal Eyes,” Dilodovico said. “Personally I thought he was much the best last year. He broke poorly and ran a huge race. We were disappointed to finish third but the effort was top-notch. He is an exceptional athlete. He just loves Monmouth. Even in the race he lost last out (Icecapade Stakes), he set some monster fractions and got beat by a horse on a seven race winning streak. We love the outside post. He is more versatile than it looks on paper. We could be forwardly placed or sit back.”

Dilodovico will also saddle Service for Ten (10-1). The gelding has finished in the money seven times in eight starts since being claimed by owner Mark Lapidus nearly two years ago, with five trips to the winners’ circle. Daniel Centeno, who was aboard for a victory in the Vincent Moscarelli Stakes at Delaware Park in his last start, will ride.

“Mark spotted this horse,” added Dilodovico. “I was kind of wishy-washy with the claim but he really wanted him and deserves much of the credit for the success he has had since coming into the barn.”

Broad Rule (20-1), who finished fifth in the 2012 De Francis Dash, has 11 in the money finishes in 16 starts on his home track, including a victory in the Fire Plug Stakes and a third in the General George Handicap (G3) earlier this year.

Royal Currier (30-1) was ninth in last year’s race. The 5-year-old son of Preakness winner Red Bullet is 0-for-3 this year.