For Ollie Figgins and Dance to Bristol, key now is keeping on schedule

This article is part one in a special series about Dance to Bristol, the four year-old, Bowie-based filly who recently won the G1 Ballerina at Saratoga.  Over the coming weeks, we will follow the horse and her humans as they prepare for her next race, the Gallant Bloom, and then for a planned appearance in the Breeders’ Cup.  We’ll introduce you to her, her trainer, her jockey, and others who play a role in her life, and take you inside the process of preparing a really good horse for the biggest race of her life.

His four year-old star filly, Dance to Bristol, had punched her ticket to the Breeders’ Cup with a hard-fought win in the Grade 1 Ballerina at Saratoga.  But that race, on August 23, was more than two months from a date in Santa Anita — longer than the trainer wanted between races.

That Dance to Bristol would be in this spot today, on the brink of entering the biggest race of the season with a legit shot to get the money, was not apparent to anyone a year ago.  Well, anyone other than Figgins. 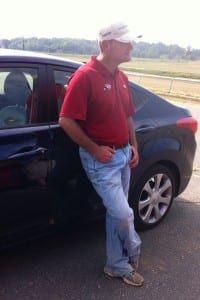 A relaxed Ollie Figgins chats about his star pupil.

“I knew pretty early on that she was a nice filly,” Figgins said. “When they [David and Susan Wantz] bought her, she was small but she was tall and leggy. The vets said she had a possible breathing issue, but nothing serious that we could see.”

By the early part of her three year-old season, Dance to Bristol had already displayed plenty of promise, winning a pair of small stakes, the Marshua at Laurel Park and the Pandera at Aqueduct.

But after a second-place finish in Laurel’s Wide Country, followed by another second in the Trevose Stakes at Parx in April, Figgins pulled the plug on the filly’s sophomore season.

“After that race at Parx, I didn’t like how she cooled out, so I decided to give her some time off and let her recover,” he explained.  “She’s been fine ever since, but the break probably did her a lot of good.”

And not just physically.  The other benefit of the break, the trainer says, was to help the filly’s mental maturity.

And that maturity has been on display during a dazzling four year-old season.

Figgins admits that he intentionally brought Dance to Bristol back for her four-year-old campaign slowly and concedes that his patience might have led to back-to-back seconds — one in December, one in January — to start the comeback.

But to this point, the January defeat is the only blemish on a remarkable 2013 record. She will head into the Gallant Bloom having won three straight graded stakes – most recently the Ballerina – five straight stakes and seven straight races overall.

While the Ballerina rates as Dance to Bristol’s most lucrative and prestigious score — and is the one that guaranteed her a berth in the Breeders Cup Filly-Mare Sprint — her gritty victory in the Grade II, $300,000 Honorable Miss Stakes in July might have been her bravest performance and the one that makes Figgins’ point about her maturity.

On that day, Dance to Bristol got sandwiched by two rivals past the opening quarter mile and was checked and steadied in tight quarters by rider Xavier  Perez before regaining her stride. Dance to Bristol pulled her way into contention on the far turn, but as the field approached the head of the lane she still had a wall of horses in front of her.

But she bided her time, and once she finally found a seam, she proved best in a narrow score.

“Considering all of the trouble she had in that race, I couldn’t have faulted her if she had gotten beat,” Figgins said. “Even if she had run second, I still would have gone to the Ballerina.”

On Saturday, the Bowie-based Dance to Bristol will put in a comfortable five-furlong breeze, her final workout for the Gallant Bloom Handicap at Belmont Park. She had worked five furlongs in an easy 1:02 3/5 on September 6, and Figgins is expecting a similar, perhaps slightly faster, work tomorrow.

“I really just want to keep her on her schedule,” Figgins said Wednesday afternoon. “She had an easy workout last week and she’ll go an easy five furlong breeze here this weekend. I wanted to keep her on her racing schedule. She doesn’t need to win for us to go forward with her [to the Breeders’ Cup].”

[pullquote]”Considering all of the trouble she had in that race, I couldn’t have faulted her if she had gotten beat,” Figgins said of Dance to Bristol’s Honorable Miss win. “Even if she had run second, I still would have gone to the Ballerina.”[/pullquote]

It’s quite a statement about a filly that cost just $42,000 at the Fasig-Tipton May sale of two year-olds in training, in Timonium — and who then finished second in her debut, against maidens at Charles Town.

In one of those odd juxtapositions the racing gods love to create, the horse that beat her that day, Dixieland Bride, has managed just one more win in 25 subsequent starts.  Meanwhile, Dance to Bristol’s earnings now top $900,000.

“She got left at the gate and rallied wide to get second, only getting beat a nose,” Figgins recalled of her debut. “She had the rail, which is never a good thing going 4 1/2-furlongs up there. She missed the break and then she came running late. I liked the way she finished. At that point, I knew she needed a bigger track.”