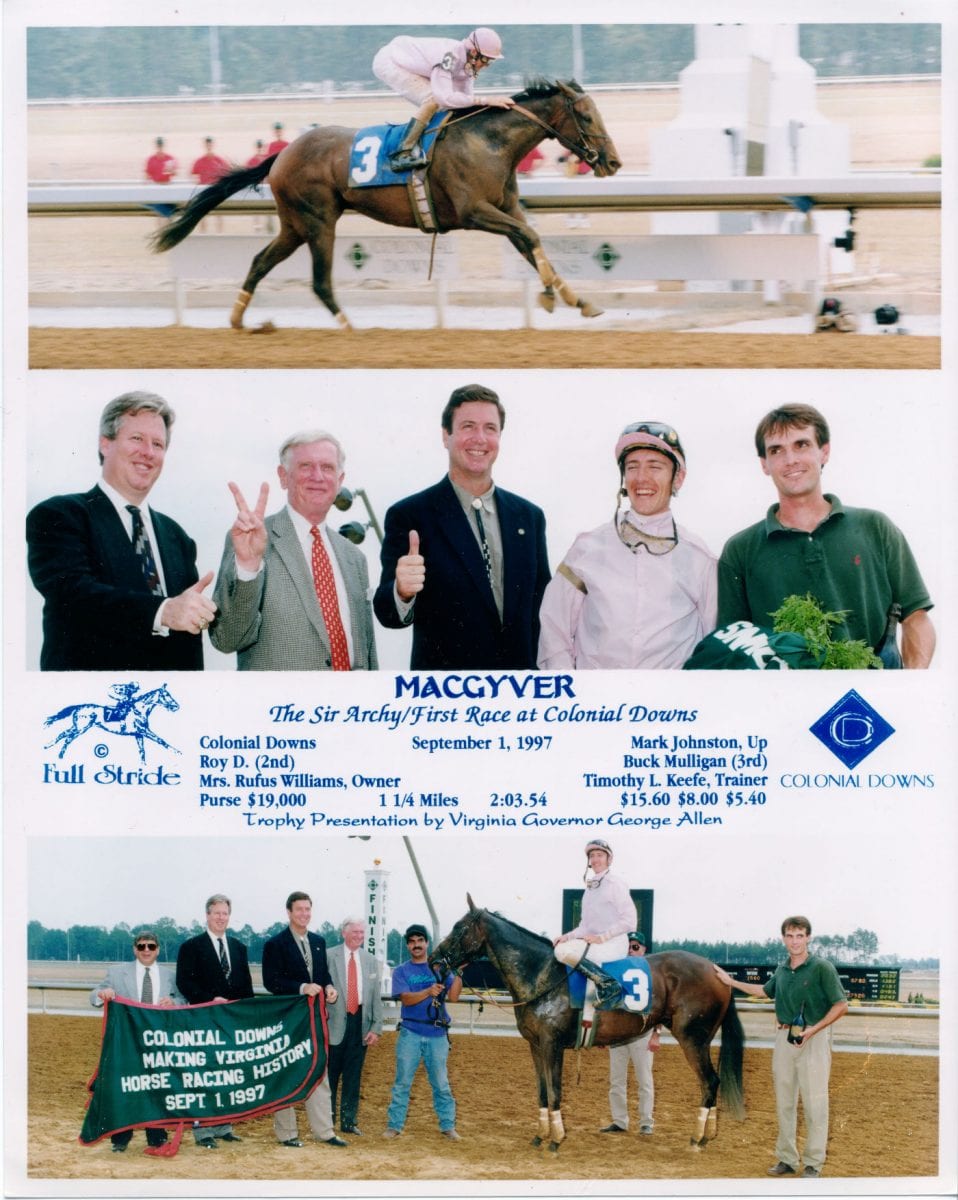 Jeff Coady is in the frames of the pictures on our walls in stables, homes and offices.  But you’ll never see him in the picture. You might have been focused on him for years, yet find him difficult to recognize.

As the track photographer at Colonial Downs and other racing venues, Coady brings racing home to participants and spectators alike. As a result, it’s in the winner’s circle — the happiest place on earth, where winners first reunite after a win — that most racing veterans or Colonial first timers alike met the mild-mannered photographer. 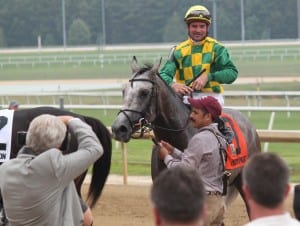 Coady is now in a Texas hospice in his battle with cancer, still strong enough to hold short conversations despite the impacts of medication. Last week he and his family celebrated his birthday with cake.

Sixteen years ago, the Colonial winner’s circle is where I met Jeff Coady.  Since then, Coady’s work has made my living room wall into a timeline of my adult life, and a showcase for the family, friends and coworkers I’ve taken to the races through the years.

From Coady’s early Colonial photos, you can identify my radio show brethren, at times crashing the winner’s circles, leaving unsuspecting owners and trainers bewildered as to the nature of our appearance.

Bert Allen gave me a standing invitation to bring groups to the center of the apron when his son Ferris won races. The Allens, hoping to excite fans at the start-up track, frequently packed their winner’s circles with festive newcomers.   Time after time, Coady shot photos capturing the excitement of the moment while remaining alert to the well-being of the winning mount. Coady’s winner’s circles are fun.

Elsewhere on our walls, I find the sequence of Coady photos that begins in 1998 with my wife Sara “in foal” with our son, Jake. Years later in the winner’s circle, jockey Richard Boucher tossed a pair of goggles to Jake who was then sitting on my shoulders. Jake put them on for Coady’s camera unbeknownst to me; I learned of the act after viewing the photo the following day. Now Coady’s winner’s circle shots serve as our family photos.

When I wasn’t in his pictures, I might have been standing next to Jeff while he was taking them, part of the entourage waiting to interview the winning connections or hand out awards.

As is the case in many racing venues, track photographers get the winners first.  And sometimes decisions Jeff made have an impact on how we recall these moments.  With a simple, subtle prompt he’s capable of steering participants in the winner’s circle in ways that turn a happy moment into an indelible one, as he did when he got owner Peter Vegso to hold up three fingers after winning his 3rd Virginia Derby with Go Between in 2006.

Perhaps one of his best winner’s circle photos was memorable less for the quality of the shot than for the fierce conditions in which it was taken. The 2008 Colonial Turf Cup won by Sailor’s Cap, was run in one of the heaviest cloudbursts on record.  Yet nearly every ear — all connected by broad smiles — is visible in the photo displayed in Colonial’s Turf Club.

Indeed, Coady’s photos line the halls of Colonial’s atrium, turf club and hallways like wallpaper. His Colonial catalog, starting with MacGyver at the track’s grand opening in September 1997, may be the only quality photographic record of Colonial, especially during the early seasons. Until this past summer, Coady was the only track photographer Colonial Downs has ever had. (Coady Photography remains under contract at Colonial.) 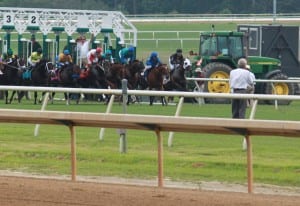 And they’re off — under the watchful eye and lens of Jeff Coady. Photo by Nick Hahn.

Farther afield and away from Colonial, after the 2003 Belmont Stakes, Coady gave me a large photo of Jerry Bailey aboard Empire Maker as they crossed the finish line, thwarting Funny Cide’s Triple Crown, another event run in a torrential downpour.  Amid the mud and rain, Bailey’s glowing smile is the only white feature in the photo.

Coady is part of a racing photography family that started with his father, Jack, in Arizona over a half century ago. His brother Jack, Jr. and three of his four sons — Kevin, Kurtis and Shawn — comprise the “clicking Coadys” that operate Coady Photography at racetracks across the country like Oaklawn Park, Keeneland and Turf Paradise. Jeff also has another son, Christopher.

Coady has referred to the summer meets at Colonial as vacation and in the past, has spent off days touring attractions and looking at homes in Virginia. If Virginia could have manufactured more racing days, Coady and wife Nelda surely would have become Virginia residents.

In the future, I’ll be referring to Coady’s pictures in my living room as I tell stories about racing at Colonial Downs…stories about Prado and Pino, Allen and Bailes, Dowell and Ross, “Derby” Bill and John Mooney. Future racegoers may become intrigued about racing after seeing some of my winner’s circle photos: the Greene County Board of Supervisors, my Special Olympian brother or any number of my son’s youth sports coaches.

For all these years, somewhere out on the dirt track, Jeff Coady has only asked for our attention and our smiles.  You have them, Jeff.