Female riders aim for the top at Penn National 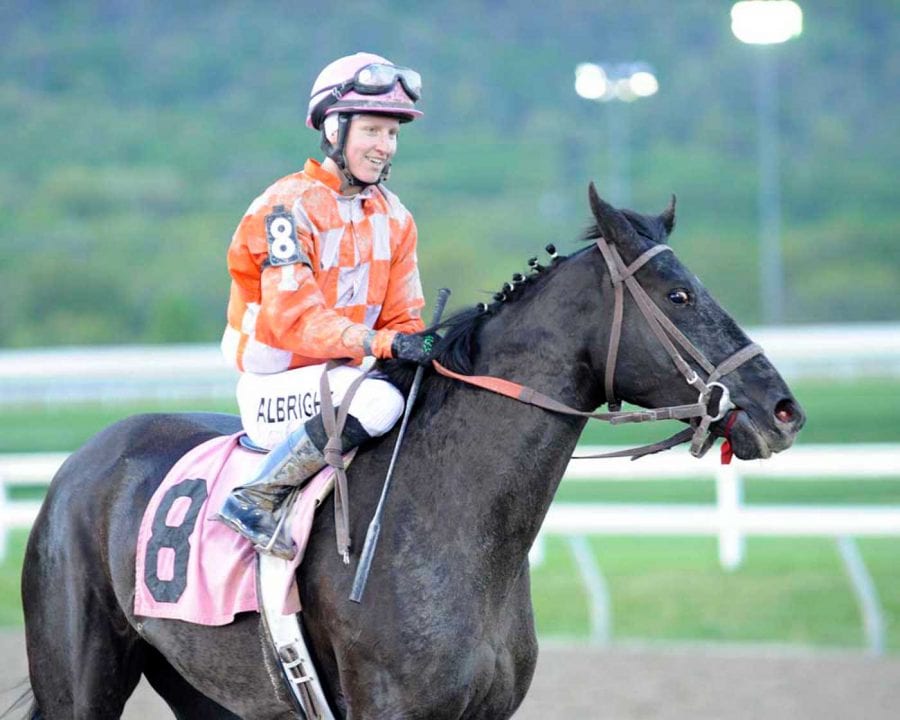 With three female jockeys in the track’s top 20 in wins – Kaylia Albright, Natasha Coddington, and Erika Strunk-Micklos – and newcomer Chelsey Keiser climbing the ranks quickly, Hollywood Casino at Penn National Race Course is experiencing one of the strongest groups of lady riders in its 40-year history.

Leading the group of talented fillies is apprentice Albright, 22, currently sixth in the 2013 Penn National rider rankings with 64 wins. A native of nearby Jonestown, Pa., she launched her thoroughbred riding career in 2012, finishing tenth among Penn National jockeys with 59 wins. 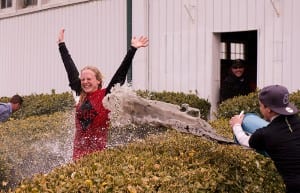 “The fact that I grew up around here, that everybody knows my family, and that my parents rode has contributed to my success,” Kaylia said. “And everybody really pushed me into riding. I wanted to do it, but they had to give me that extra push to get started.”

One of her fans is two-time leading Penn National trainer Murray Rojas, who often uses Albright on her horses.

“I think Kaylia is an up-and-coming rider with great hands and a great attitude,” said Rojas. “She works very hard and loves the horses. It’s not just a job to her; she loves riding. She comes in the barn in the morning and gives the horses peppermints. Not too many riders do that.”

Another apprentice rider enjoying success this year is 20-year-old Natasha Coddington, a Seattle, Wash.-native who currently sits 13th in the yearly Penn National standings with 22 wins.

Her uncle, John Heath, was a professional jockey, and she credits him for sparking her interest in racing.

“When I was about 15, he put me on a horse and that was the end of the story – I just fell in love with it,” Coddington said. “From there he taught me how to break babies, and he guided me through my career so far to get to here.”

Coddington has caught the eye of Penn National’s leading trainer John Locke, who often uses her on his horses.

“Horses seem to run for her,” said Locke. “She’s not afraid of anything, which is very important because horses pick up on when a rider is worried or afraid. Some of the owners actually request her to ride their horses, which is kind of unusual since owners often want more experienced riders.”

The veteran of the strong Penn National female rider contingent is Erika Strunk-Micklos, currently 17th in the standings with 15 wins.

With a career that started in 2005, the 36-year-old native of Brookville, Pa. is one of the most respected jockeys at Penn National and serves as a terrific role model for the younger female riders. 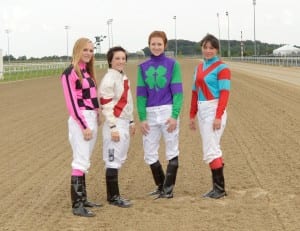 “I do try and give them advice about some of the difficulties and some things that can make your business a little bit easier,” said Strunk-Micklos, who has a teaching degree in Biology. “I try to encourage them, more than anything.”

Strunk-Micklos got a later start than many riders, bringing a homebred to the racetrack nine years ago and falling in love with the sport.

“I think a lot of women start later,” Strunk-Micklos said. “We have some young girls right now, but in my contact with other female riders, a lot of us have horse backgrounds but don’t necessarily come from the racetrack.”

New on the Penn National scene is 21-year-old apprentice rider Chelsey Keiser, who started riding professionally this year and shows six wins from 34 starts at Penn National.  She earned her first career win at Laurel in March aboard the aptly named Smileforthecamera, and she finished fourth at the recently concluded Colonial Downs meet with 14 wins, leading all apprentice riders.

Growing up in North Star, Ohio, Keiser’s parents were both involved in racing – her mom Deb as a trainer and her father Mike as a farrier. She galloped horses on their farm and two years ago she gained experience at the 2-year-old sales in Ocala, Fla. While there, she met Eddie Warner, assistant trainer to Hugh McMahon, and with their help, she started riding professionally in March.

“After the Colonial meet, I needed somewhere else to go and I heard this was a good spot, so I ended up here,” said Keiser, who has made a name for herself in her short time at Penn National by scoring on a few long shots on the grass. “I like the turf, I’ve gotten a little more practice on it, but I can get it done on the dirt too.”

Albright, Coddington, Keiser, and Strunk-Micklos get along very well and have formed a friendship based on healthy competition and mutual respect.

“Yeah, we’re competitive, but we’re all friends,” said Albright. “On the track, though, it’s all business.”

“The competitive nature of our friendship makes us work harder,” said Coddington. “I think it’s good to have multiple female jockeys because sometimes I don’t feel comfortable going to one of the guys and asking them for help. But I can ask Erika or Kaylia their opinion on something.”

“There’s this line where we are friends in the jocks room but when it comes to getting on a race horse, it’s game time,” said Keiser. “I’m out to win, just like they are. If I see a nose beside me near the wire, you better believe I want to nose out the win.”

Strunk-Micklos agrees that they are all trying to win, but also acknowledges that she has a special rooting interest for her female counterparts.

“We are certainly out there to compete with each other,” said Strunk-Micklos. “However, while if I’m in a race I want to be the winner, I would love it if they were second, third, and fourth. While we are competing against each other, I see them as my teammates. When one of us is successful, it shines a good light on female riders in general.”

(Featured image, of Kaylia Albright, by B & D Photography.)