As is usually the case, the big guys did just fine in this evening’s greatest show on turf.

Kenny McPeek took home the money in a thrilling rendition of the G2 Virginia Derby, his War Dancer edging Charming Kitten and Jack Milton in a three-way photo, and he won the Kitten’s Joy with favored Al Qasr. 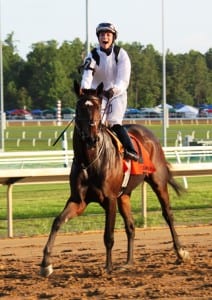 Ken and Sarah Ramsey sent a battalion of horses north from Kentucky, with emotionally connected Thank You Mary Lou — more on that elsewhere —  winning the Tippett in his career debut and had several others running well.  Even if he did confide to me that finishing third is, in his mind, second loser.

More locally, the powerful PTK, LLC barn helmed by Dane Kobiskie staged a virtual sit-in in the Chenery, running three of the seven horses in the race and locking down first, second, and fourth.

But the Derby wasn’t the only thriller of the day, and the big guys weren’t the only ones to prosper.

In the Grade 3, $150,000 Virginia Oaks Nellie Cashman, a 19-1 outsider, knocked the wagering world on its ear by posting a half-length victory over favored and fast-closing Praia.  She sat a comfortable trip tracking an easy pace — the sophomore fillies took nearly 1:17 to negotiate three-quarters of a mile — then came home swiftly to edge Kenny McPeek’s Oaks entrant.

Score one for the little guy.

You’d have been forgiven for thinking that either national-rep rider Alan Garcia — on Praia — or Joel Rosario — aboard early leader Three Hearts — would likely outfinish the local product, most of whose riding accomplishments had come in Maryland, seeking the first graded stakes win of a career that began in earnest in 2009.

And, yes, you’d have been forgiven for thinking that a Team Valor horse trained by Richard Mettee or a McPeek horse would have something in the tank that a Francis Abbott, III trainee might not.

For when the dust had cleared, it was Boyce who stood tall in the stirrups, an enormous smile on her face, Abbott who slapped hands with her in glee, and Nellie Cashman who took home the big prize.

Boyce said she was happy for an animal she described as a “hard-luck horse,” one that had been interfered with in one race and forced to jump a fallen rival in another.  It was also a horse that had taken seven tries to break her maiden, finally doing it against Pennsylvania-breds at Penn National in June.

That perhaps made a grade 3 event a somewhat curious choice.  In fact, said Abbott, the original plan had been to run her in a state-bred allowance race, but, you know, plans change.  Asked what was next, he wasn’t quite sure; after all, he said with a laugh, “We just burned an allowance condition with her.”

For Abbott, it wasn’t just the first graded victory of his career; it was the first stakes win of any kind.  He’d won just two races in 2013 entering the weekend before winning on Friday — in a $5,000 claimer.  This was something a little different.

“It’s great,” he said in a tone, and with a look, that said it was a lot more than great.  “She was only being ridden to hit the board, not to win.  Then when we hit the quarter pole, and everyone was sort of wallowing behind her, I started shouting.”

The horse is owned by a partnership, Sycamore Racing LLC, put together by Abbott’s father, who’s the one who introduced the son to racing.

So for these little guys, there’s plenty of time to figure out what’s next.  When a horse goes from maiden to graded stakes winner in two jumps, options bloom.

And you can safely assume the jockey will remain the same.  He didn’t really give Boyce instructions prior to the race, he said.  The good ones know what to do, he suggested and the bad ones won’t execute what you want anyway.

And Boyce, well, she showed she belongs in the former group.