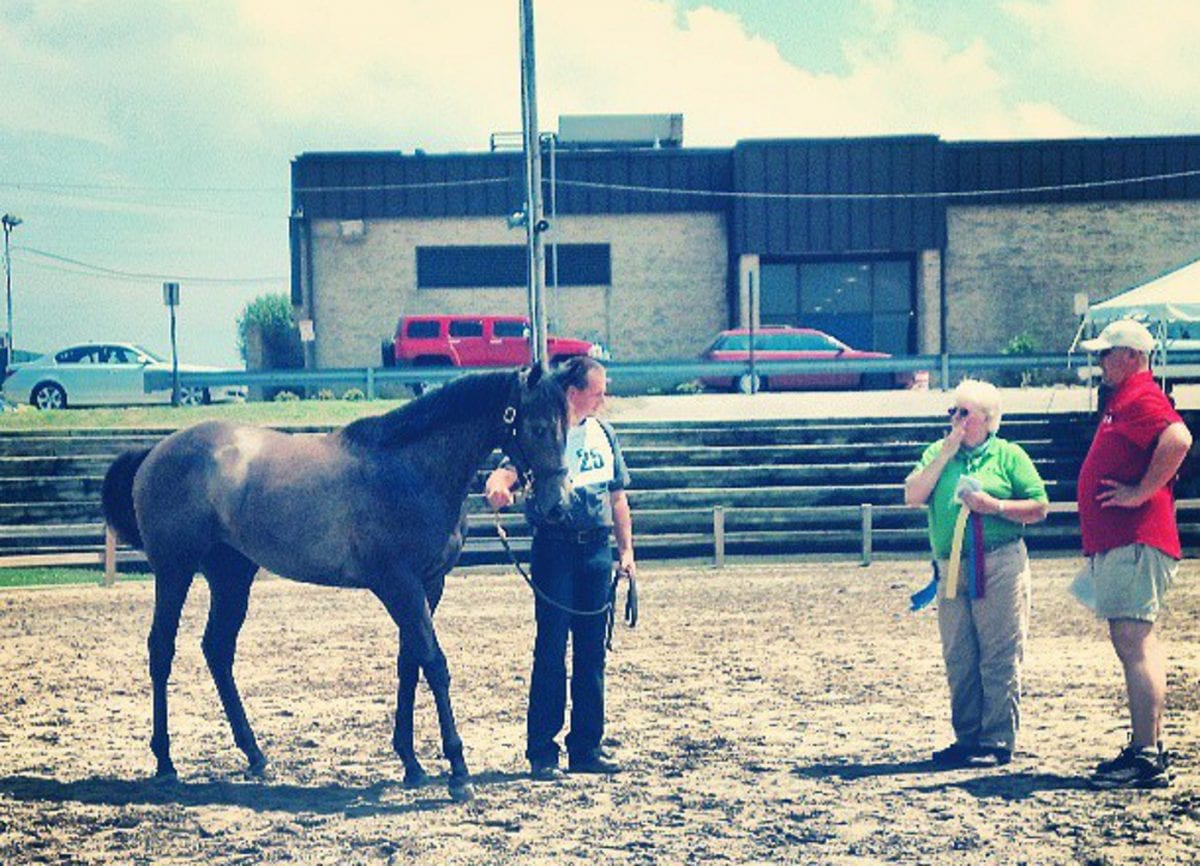 A filly bred and owned by Kevin Plank’s Sagamore Farm was chosen by trainer Ken McPeek as grand champion of the 79th annual Maryland Horse Breeders Association’s Maryland-bred yearling show held on June 30 at the Timonium Fairgrounds horse show ring in Timonium. The gray/roan daughter of Macho Uno – Dicey D J, by Milwaukee Brew, took the top prize over 64 other yearlings exhibited at this year’s event.

The champion was the winner of Class IV, the largest of the day, for fillies conceived in states other than Maryland. McPeek was impressed from the moment he saw her. “She’s a beauty,” said this year’s judge. “She had presence, she had size, she had substance, she had reach. That’s a good filly, but there are a half-dozen or more other ones in there that I would love to have in my barn.” The unnamed filly, foaled on February 5, is the second offspring for her dam Dicey D J, who was purchased privately by Sagamore Farm after capturing Pimlico’s Hookedonthefeelin Stakes at Pimlico in 2008.

In accordance with show protocol, McPeek was only allowed to know the foaling dates of the entered yearlings prior to judging. “I prefer to look at the pedigrees because it lets me get an idea what I’m looking at but that’s okay,” noted McPeek after the show. “It’s still about bodies. You don’t need a page to see that. It was fun. I enjoyed it.”

The reserve champion was the winner of Class I, for colts and geldings foaled in Maryland by Maryland sires. Owned and handled by Marshall Silverman, the bay Outflanker colt out of Sultry Rendevous (by Sultry Song) was bred by Don and Taffy Litz. “I had no clue what to expect, but I love looking at yearlings and there were a lot of nice yearlings here,” added McPeek.

The leading Maryland sire of the show was Outflanker, who took title to the Northview Stallion Station Challenge Trophy by having the reserve champion as well as two other ribbon winners.

Class I. For colts and geldings foaled in Maryland, the produce of mares covered in Maryland. (15 exhibited):

Class II. For colts and geldings foaled in Maryland, the produce of mares covered in states other than Maryland (18 exhibited):

Class IV. For fillies foaled in Maryland, the produce of mares covered in states other than Maryland (20 exhibited):