Frank Carulli is leaving with laughter, and he wants to make one thing clear: a rather well-known pressbox habitue who prides himself on his ability to identify live longshots by their physical appearance on the track is, in fact, “A-one horrible” at the task, the about-to-be retired Maryland Jockey Club linemaker and on-air handicapper says.  “He has never given me one horse that won, and that covers hundreds of horses,” he adds.

And he asks — pleads, almost — that I name the benighted soul.

But we’ll protect the innocent.  Or guilty.  Whichever.

Oh, and he also wants this known: “King Leatherbury not being in the Hall of Fame is a disgrace,” he says vehemently.

Oh, and also: the MJC should build a Preakness museum on the Pimlico grounds because, he says, the middle jewel is “the greatest race out there, based on what’s happened in the race.” 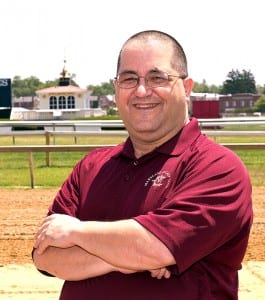 It turns out that the  51 year-old Carulli, whose final day is today, has plenty to say on a variety of racing topics.

“You’ve got to know your sources,” he tells me in the midst of a lengthy sitdown that began just a few minutes after he’d completed what, if life goes according to plan, will be the final odds line of his career.

That’s good advice, of course, and also funny, because when it comes to Maryland racing, there haven’t been many sources these last few years any better than Frank.

The line you’ll hear is that he lives and breathes gambling — he’s leaving Maryland to move to Las Vegas, after all — and that’s true, as far as it goes.  But sit down with him and you realize that it doesn’t go nearly far enough.  The fact is, he’s a guy who likes to talk, and he likes to talk horses.

Sometimes too much.  Once, during a Preakness post position draw televised on ESPN, he overstepped his allotted time.  “I had all my notes lined up,” he recalled with a laugh, “and I talked too long, and Hammerin’ Hank (Goldberg) was nudging me, like, ‘Hurry up.’  I dug into his time, clearly.”

Contrary to popular opinion, it’s not just the odds, the payoffs, or the angles that grab him.

What he remembers about Xtra Heat’s 2003 Barbara Fritchie victory in the dense fog at Laurel, for example, is not her odds (even) or the exacta ($12.20).  “The fans were in waves coming down the track apron,” he recalls.  “With all of them, and the picture flashes going off in the fog, it was absolutely numbing.  It was so cool.  You thought, ‘This is how horse racing ought to be.'”

And though we may think of linemakers as soulless automatons, Carulli allows a bit of sentiment into his lines; that’s why he virtually never lines a horse at more than 30-1.  “I never go over 30,” he says.  “It’s a little thing, but I don’t line horses 50 out of sheer respect for the owners, who might be filling the race for the race to go.  They might have been hustled into the race, and I don’t want to embarrass them.”  And then with a chuckle: “If I have him at 30, he’s 50.”

And just like that, we’re back at odds and payoffs.  Then again, know your sources.

Carulli’s memory for what some consider minutiae and others see as mother’s milk — lines and odds and payoffs — is staggeringly vast and accurate.  Sure, he remembers that Mr. O’Brien, upset winner of the 2004 Dixie, paid “$26 or $27 to win” (actually, $24.80, but close enough for a nine year-old race), but that race was also memorable because it remains the largest win bet of his career.

In the course of our conversation, he recalls linemaking and betting decisions he’s made — often on utterly forgotten, and forgettable, horses — with perfect clarity.  He throws out the prices on a half-dozen or more horses in races run as much as 15 years ago.  While listening to the tape of our conversation, I check his facts.  Every one of them is correct or very nearly so; when a guy can remember the as many details as Carulli can about, say, It’s Only Money’s debut race in 1998, you don’t quibble that the horse actually paid $39.20 to win, and not the $36 Carulli recalls.

It’s a virtuoso performance by a man who’s as good a linemaker and as informative a public handicapper as there is.

His memory is one thing that’s made him so good at his job.  That he knows his sources is another.

[pullquote]The fans were in waves coming down the track apron,” he recalls.  “With all of them, and the picture flashes going off in the fog, it was absolutely numbing.  It was so cool.  You thought, ‘This is how horse racing ought to be.'”[/pullquote]

Some jocks and trainers, he says, are reliably accurate predictors of when a horse is ready to run.  He calls Travis Dunkelberger — a good friend from Carulli’s days as Charles Town’s on-air handicapper — “the best tout that ever lived.”

Or take the story of It’s Only Money.  Jockey Rafael Arrayove told him the night before the race, “You don’t always know with two year-olds, but you know the difference between a Volkswagen and a Cadillac.  I haven’t been on a Cadillac in a while, but I’m  on one tomorrow.”  Carulli found out who the Cadillac was and bet, as he likes to say, “with both hands.”

Others, not so much.  Some of the less reliable touts genuinely like everything in the barn.  Others, he says, have mastered horseracing “coachspeak” and are “very pleased” with all their horses and expect them “to run good today.”

One source he trusts implicitly is the chart callers.  He speaks with genuine admiration of their ability to see things in races that escape the eye of even an astute handicapper.  He recalls receiving a tip from a jockey who had, under instructions, purposely held a horse from running its best; the horse’s connections figured to make a killing at the betting windows in the animal’s next start.  Carulli, unusually, kept the tip to himself.  His plan was foiled, though, when one of the chart callers, asked by a writer if he had any tips, answered, “Matter of fact, I do,” and identified the same horse — not because he’d received the same tip but because he’d observed the jockey’s subtle but decisive movements.

Not all sources are so helpful.

After Smarty Jones ran his record to seven-for-seven with an impressive win in the Kentucky Derby, the colt headed to Baltimore likely to be a strong favorite.  In his preliminary line, Carulli had Smarty, he remembers, at about even money, with the next horse, Lion Heart, around 6-1.

Joe De Francis, then-owner of the track and a man Carulli speaks of with appreciation for the opportunities and support De Francis provided, called to discuss the line.  While Carulli had made Smarty a strong favorite, “Joe said, ‘Well, I got like six horses at 6-1 or under,'” Carulli says.  “I said, ‘Well, I don’t.”

He laughs.  “But I tweaked the line a little bit.  I think I made Smarty 7- or 8-5.  At the post position draw, Lou Raffetto [who ran the Maryland tracks for several years] said, ‘Let me see you odds line before you go on the air.’  I showed him, and his first reaction was, ‘Why do you have Smarty so high?'”

Several in the media had the same question.  Carulli, who ultimately was able to line the horse closer to even-money when another horse scratched, chuckles that he was “taking one for the team.”

He’ll do that once more in the final race of his career.  The eleventh today at Pimlico is Carulli’s least favorite race to line: maidens on the turf with a full field, a bunch of also-eligible horses, several firsters, and a number trying the grass for the first time.  It’s hard to know which firsters might take action, which horses might take to the grass — or even which horses will finally end up in the race.  A couple of scratches, or a buzz around a horse or two, can turn a sensible line into a trainwreck.

Does that mean I think the final betting will differ much from Carulli’s morning line?

Nah.  You’ve just got to know your sources.